The Story Of Bradford Watermelons 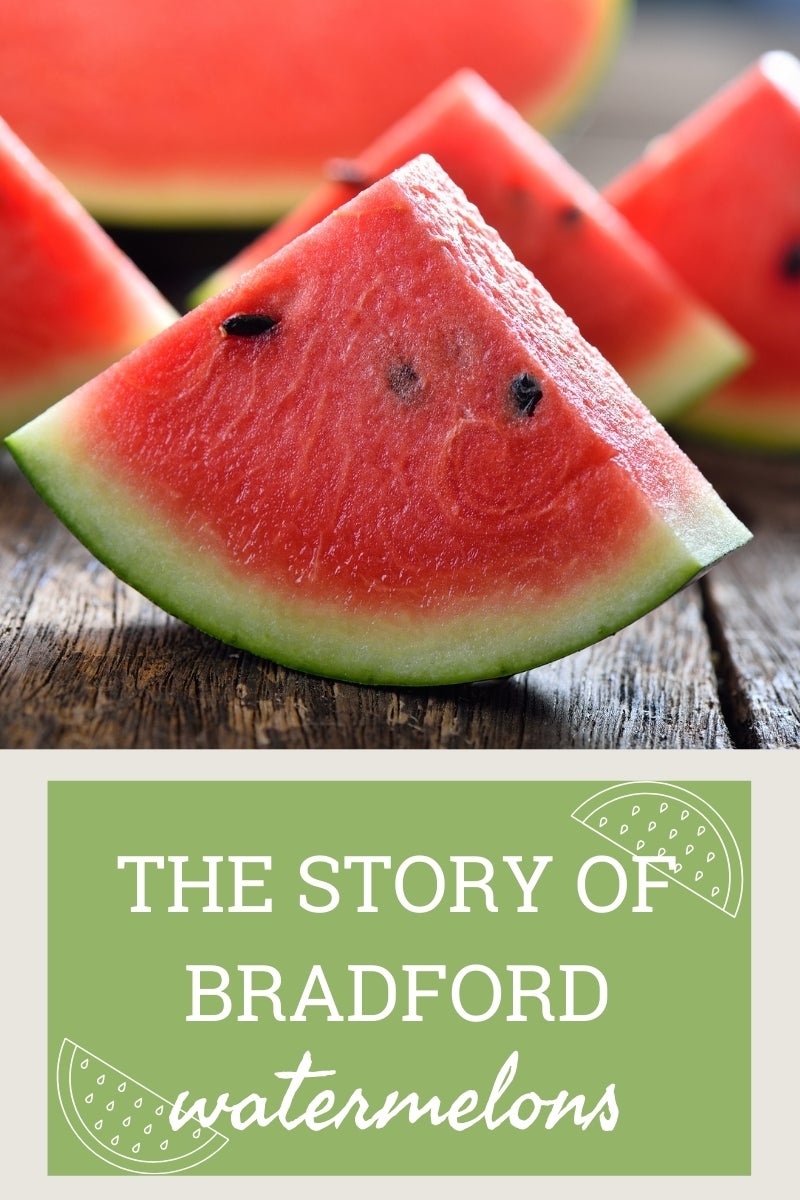 Homegrown produce always tastes better. The freshness can’t compare to store bought fruit and vegetables, often picked before the peak of ripeness and shipped across the world. Sometimes though, it’s not only the freshness of homegrown produce which makes it taste better. Often, it’s the variety. This is especially true with the heirloom Bradford watermelon.

The story of Bradford watermelons began over 170 years ago, when Nathaniel Bradford bred what eventually became known as the sweetest and most flavorful watermelon in the South. These large, oblong melons had red sugary flesh, fine white seeds, and a tender dark green skin.

It was the spoon-tender rind which nearly drove this delectable fruit into extinction. Much too tender to stand the jostling of commercial shipping, the Bradford melon slipped out of favor by the early 1900’s. The commercial market demanded the development of watermelons with hard, thick skins and tough rinds which could withstand shipping and stacking.

Yet, the sweet, delicious Bradford melon lived on in the backyards of the descendants of Nathaniel Bradford. For generations, the namesake melon was grown and enjoyed by family members. Each year, the seeds were faithfully saved, and this tasty Bradford family secret remained hidden from the rest of the world.

Around 2005, University of South Carolina professor David Shields began searching for this once coveted variety of melon as part of his research on heirloom varieties. His efforts to locate Bradford watermelon seeds in germplasm banks and seed saver’s exchanges proved futile. He had concluded the heirloom variety was extinct.

It took another seven years for the truth to be revealed. One sleepless night, Nathaniel Bradford, namesake and great grandson of the infamous Bradford watermelon breeder, sat down at his computer. Years before, the landscape architect had run across an 1850’s book which contained a listing of the best fruits and vegetables of the era.

Surprised to find a listing for the Bradford watermelon, Nathaniel’s curiosity had been piqued. His family traced their roots to the very area of South Carolina where the Bradford watermelon had originated. Could this be the same variety of melon his family had grown for generations? This question remained unanswered until that fateful night in October of 2012.

This discovery led Nathaniel Bradford to redirect his life to the preservation of the heirloom Bradford watermelon. He began growing, distributing, and branding his family’s namesake watermelon, melon products, and seeds from his South Carolina farm.