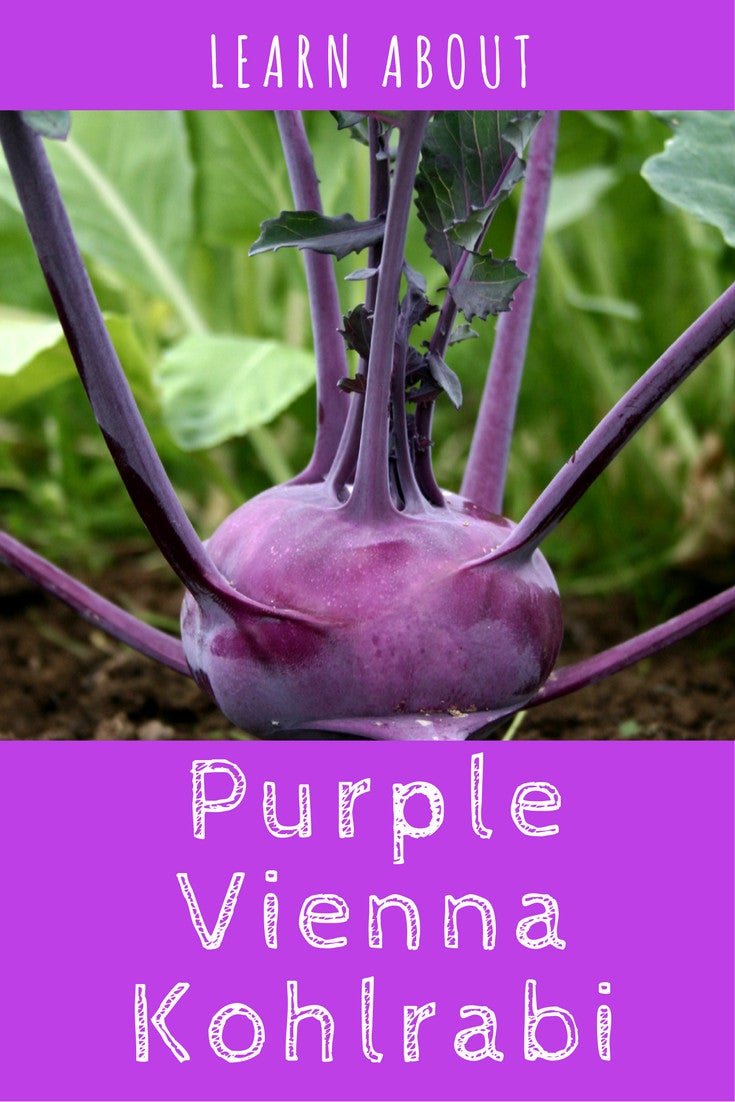 (Author of The Bulb-o-licious Garden)

So if you’re anything like me, something of the unusual sort in the garden is on your must-plant list. Well, do I have a plant for you – Kohlrabi, especially the heirloom variety aptly named Early Purple Vienna. What is it that makes this vegetable so special? It’s simply out of this world, or at least you’ll think it is.

While its origin is not written in stone, this historical plant may not have been around quite as long as some of the others in the family, but it’s still been around for some time. In fact, kohlrabi was first recorded around 1554 in Italy when the botanist Matthiolus spoke of the veggie as “having come lately into Italy.” Its name, however, translates to “cabbage turnip” in German and derives from idea that it may be a cross between cabbage and rape. Who really knows? In general, the names of old veggies have a link with people, places, or history, and most heirlooms came with immigrants to the U.S.

The Early Purple Vienna, also known as Di Vienna Violetto, predates 1860 and is presumably from Austria. The inner flesh of this purple variety is white and is slightly larger than the Early White Vienna. It’s also said to be more flavorful with a sweet cabbage taste, depending on the person eating it. Just some of the examples here include a flavor similar to apples, mild turnips, broccoli stems, radish and cucumber.

This variety is deemed particularly stunning in the garden too, seemingly glowing at certain times of the day. Perhaps yet another link to the other world? The bulbous stems of Early Purple Vienna plants are shaped like round tennis balls with ruffled foliage, resembling broccoli leaves, growing out from the tops and sides. These leaves also make tasty greens.

Well, now that you know a little more about this fascinating plant, growing the heirloom in your vegetable garden will help keep its history alive and ensure its survival overall. And you don’t want future generations missing out on such an unusual plant.

Kohlrabi is fairly easy to grow and, much like its cole crop relatives, requires cool temps during the growing season. Direct seed Â¼ inch deep around the last spring frost (or for a fall crop, sow 8-10 weeks before the first frost in autumn). Plant them about 4-6 inches apart or in rows 12-18 inches. Give these jewels rich, fertile soil and plenty of moisture.

Early Purple Vienna is fast maturing and normally ready to harvest in 55-60 days, or once the young stem reaches about 2 inches in diameter. It shouldn’t be too difficult to tell when these veggies are ready for takeoff – simply look for the swollen globe-shaped stem squatting just above the ground. It will resemble a small purple-colored apple. As stated in old texts (no not text messages – but actual books), “when used before it is fully grown, in which state it is generally eaten in Germany, while in Italy the swollen stem is often eaten before it has grown as large as a hen’s egg,” picking it young is preferable to avoid a woody texture.

So not only does this heirloom kohlrabi make an attractive addition to the garden, especially alongside other interesting heirlooms, like Rainbow chard, its juicy, crisp texture and delicious flavor will give that added zip to salads and slaws. Or you can try it steamed, sautéed, stir-fried, or pickled. Any way you like it, you’re sure to strike up a conversation with this one-of-kind looking plant.