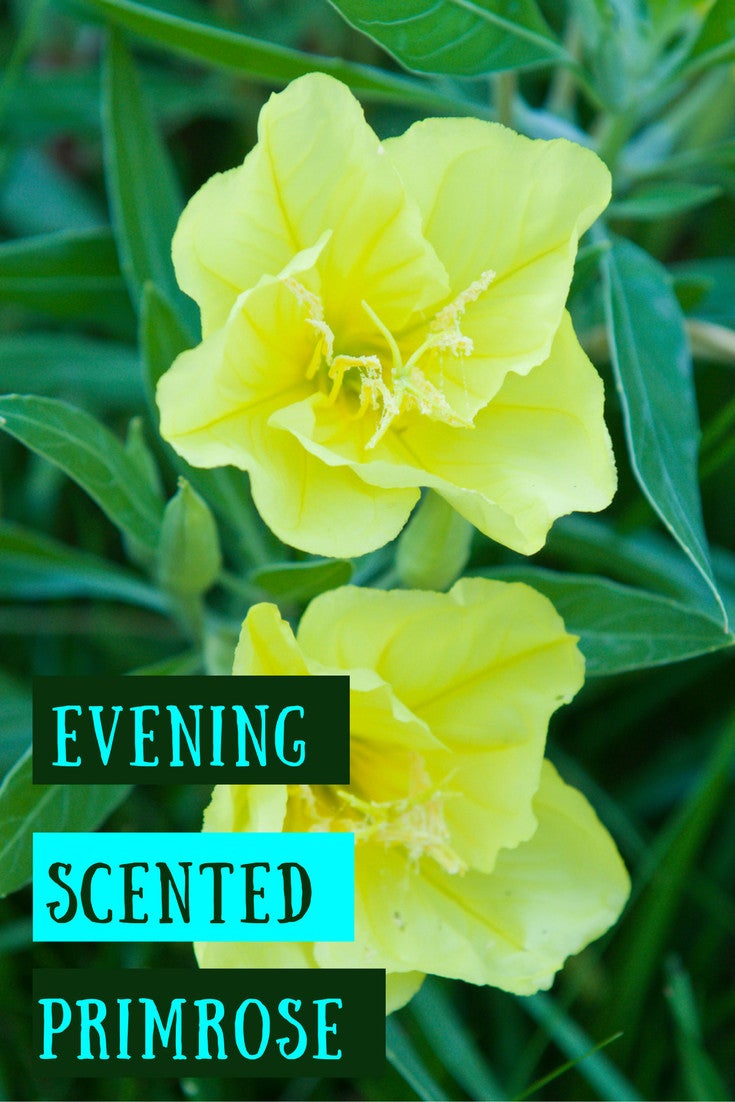 Evening primrose (Oenothera biennis) is a fascinating plant with flowers that fill the air with sweet perfume, and plenty of “oohs and aahs” too. The attractive yellow blooms appear after dusk (hence the name), attracting sphinx moths and other nighttime pollinators. A single bloom can last as long as six weeks – the plant’s history, however, goes way beyond that.

The history of the evening primrose goes back to at least the seventeenth century, when medieval medical practitioners used various parts of the plant to treat a host of common ailments, including pain, skin disorders, facial blemishes and a variety of “female problems.” – And, apparently, we seem to have lots of those. Early herbalists called the plant King’s Cure All.” Even today, evening primrose oil is used to treat illnesses ranging from arthritis to multiple sclerosis, Alzheimer’s disease, obesity and cancer.

It is believed that the genus name, Oenothera, derives from the Greek word for ‘wine scenting’ and refers to its use in adding fragrance to wine via the roots. Though thought to be a North American native, the evening primrose, also known as Evening Star, was introduced to the United States in 1897. Since that time, the plant has become naturalized across most of the country. Evening primrose isn’t always appreciated, however, and because the wildflower tends to reseed itself generously, many people consider it a common weed. In fact, it can often be seen growing wild in dry, open locations and disturbed areas such as roadsides, old fields, drainage ditches and along railroad tracks.

Nonetheless, its beauty, fragrance and historical background alone should make this heirloom plant worth growing – to me anyway. Don’t confuse evening primrose with the trueÂ primrose (Primula), a well-behaved early spring bloomer valued for its range of colorful jewel tones. Unlike the neat, compact Primula, evening primrose reaches mature heights of 3 to 5 feet and sometimes more.

Growing heirloom wildflowers, such as evening primrose, isn’t difficult if you can provide well-drained soil and plenty of bright sunlight. In fact, the only way to kill this sturdy, drought-tolerant plant is by situating it in soggy soil. Although you can plant evening primrose directly in the garden, planting seeds indoors gets things off to an early start. Sprinkle the seeds lightly on a tray of moist potting soil, then cover the tray with plastic to create a warm, humid environment. Don’t cover the seeds with potting soil.

Fun fact (which I just had to throw in): it has been said that the seeds can remain viable for about 70-80 years when buried in soil!

Remove the plastic as soon as the seedlings poke through the soil. Move each seedling to an individual pot when the roots are about an inch long, then transfer them outdoors in late spring or early summer. Harden them off for a few days first so the sudden change in environment doesn’t shock the tender plants. Keep in mind that evening primrose is a perennial and will likely develop only an attractive rosette the first year. The big, impressive blooms and reddish-green stems show up the second year. While the plant completes its lifecycle after blooming, it generously reseeds itself to make repeat performances year after year, maybe your entire lifetime too!

Evening primrose requires little water and demands almost no attention. However, the plant is sometimes attractive to Japanese beetles. If you notice beetles, the best way to control them is to remove them by hand when the pests are active early in the morning. Prune the plant after blooming if it becomes long and gangly in midsummer. Otherwise, just sit back and watch it grow”¦and grow!

Tell us what you think: Leave a comment
8 people are already talking about this.
Printer Friendly Version
Read more about Throw Back Thursdays
<PreviousNext>
Did you find this helpful? Share it with your friends!
FacebookTweetPinEmail