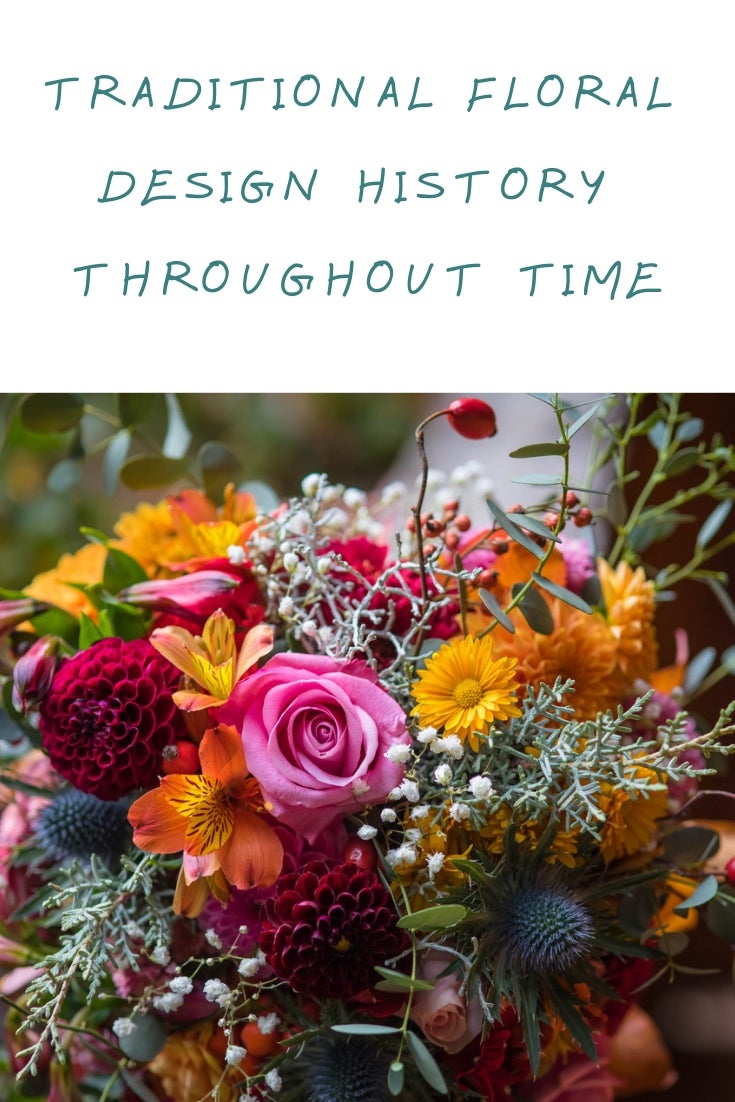 Whether celebrating a recent promotion at work or mourning the loss of a loved one, fresh flower arrangements have become a ubiquitous part of many modern cultures. While there are many reasons one may choose to give fresh flowers to their loved ones and acquaintances, the practice is not new. In fact, the use of flowering plants in stylized ways dates as far back as Egyptian times! Let’s look a little deeper at the history of traditional floral design to see how the modern-day bouquet came to be.

Though the evidence of floral design dates back as early as 2,800 B.C., early Egyptians used flowers much differently than we do today. As one may imagine, these early floral designs were quite the luxury and most often reserved for members of higher society. Flowers used to design ceremonial wreaths and garlands were chosen for their meaning and specific purpose rather than their beauty. One such flower, the lotus blossom, was considered especially sacred.

Both Greeks and Romans incorporated floral design into various ceremonies and celebrations as well. Known most commonly from this period is the extensive use of wreaths and garlands. Fragrant flowers and herbs were used widely by many, especially during festivals, in which all were invited to wear decorative floral crowns. When creating arrangements, floral designers of this time period paid specific attention to the symbolism of the flowers, making certain that the types used were appropriate for the occasion. The abundant and extravagant floral design practices of the Roman empire undoubtedly played a major role in traditional floral design.

Greek and Roman styles continued to influence floral designers, as gradual changes were made to flower arrangements, such as the utilization of fruit and vines. As oriental influence become more prominent, many historic floral designs began experimenting with more simple arrangements which consisted of fewer flowers and carefully arranged lines. After the Renaissance, the history of flower arranging continued to evolve. Surprisingly, however, many great painters began to focus on arranged flowers as their subjects. In this, floral design styles became somewhat more adventurous as florists explored curved and asymmetric arrangements.

As Victorian times approached, flower arranging once again made the shift in which elaborate floral arrangements were meant as a means to display wealth and status within the community. Wealthy gardeners would frequently pick and arrange flowers from their own gardens for display and to give to friends and acquaintances. While mixed arrangements were common, single flower type bouquets were also common during the Victorian period. Given for specific reasons, the type of flower one was given was often symbolic in meaning.

In many ways, modern flower arranging is a culmination of its unique history. Naturalistic and structural arrangements today are still used to celebrate special occasions, as well as offer a sense of well-wishing or well-being. More than ever before, beautiful fresh flower arrangements are finding their places in homes as a way to enjoy the colors and scents of nature. Dried flower arrangements are also popular in today’s décor.