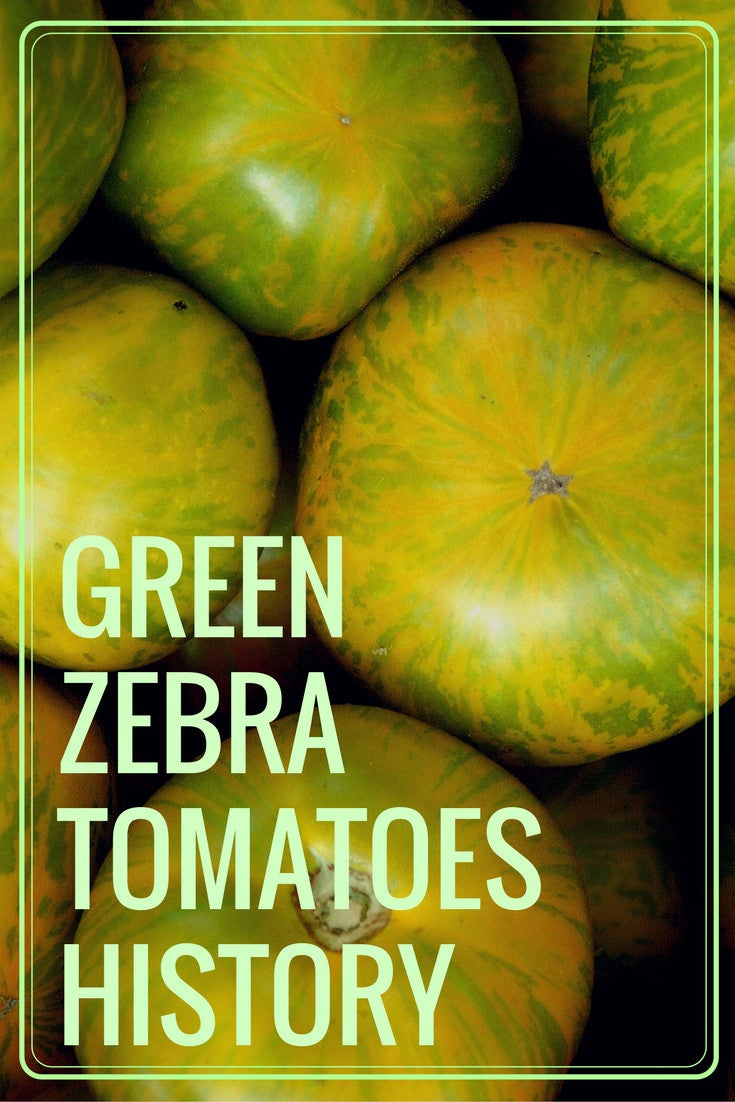 Green Zebra tomato plants yield medium sized (2 inches across or so) fruit that is as its name suggests, chartreuse striated with brilliant lime green stripes. The flesh is also green, firm and sweet, yet with a sharp tang.

So where did this luscious fruit come from? It would seem to be an heirloom, but is it? Green Zebra heirloom tomatoes were developed by a guy named Tom Wagner from Everett, Washington. He had been thinking about improving upon one of his favorite tomatoes, Evergreen, in the 1950’s. While he liked Evergreen tomatoes, they tended to crack. Tom was determined to improve Evergreen tomatoes; however, it did take him some time.

Finally in 1983, Tom introduced Green Zebra tomato plants to the world. They were available in his Tater-Mater Seed catalog from 1983-1986. Today, they are widely available through other catalogues and nurseries and it isn’t unusual to find them at the farmer’s market or at high end grocers.

So are Green Zebra tomato plants considered heirlooms? It depends upon who you ask. Hard core heirloom definitions say a true heirloom must be “borne of seeds that have been handed down for at least 50 years, but preferably 100.” Some folks pick a rather arbitrary date of 1945; that is seeds available prior to 1945 have heirloom status. Why?

Seems a bit odd to me but, apparently, because World War II ended then and thereafter seeds were widely available from commercial growers and seed companies, whereas before ’45 your neighbor or a church member or your mom were the sources for your seeds. Generally speaking, most people agree that they are a created heirloom. Maybe they don’t have the age that Grandma’s Mortgage Lifter from the Depression era possesses but, nonetheless, they are a cross between a hybrid and an heirloom.

These practically blemish-free beauties can be grown in the garden proper but the tomatoes also make terrific container grown specimens. The vines only reach to around 5 feet in length and can easily be supported in a container.

Green Zebras are harvestable in about 75 days from transplantation. Because they have a relatively long growing season, they are best started indoors 6 weeks prior to the last frost in your region. Sow the seeds Â½ inch deep in a well-draining soilless mix. Keep the seeds at temps between 65-90 degrees F. (18-32 C.) and the soil damp.

When the seedlings have 2-3 sets of well-developed leaves and outdoor temps don’t dip below 50 degrees F. (10 C.) at night, you can transplant them outside. Choose a well-draining site with a pH between 6.0-6.8 in full sun, at least 8 hours per day. Harden off your Green Zebra tomato plants for a week or so prior to transplanting to reduce stress. You may want to cover the seedlings with row covers or hot caps to keep them warm in the early season. Space plants 14-20 inches apart.

Mulch around the tomatoes to aid in moisture retention and weed suppression and keep the tomatoes consistently irrigated. Don’t fertilize with high nitrogen foods or fresh manure, which promotes foliage growth and limits fruit set. Sidedress with Â½ cup of 5-10-5 fertilizer and work into the soil when fruit is around an inch across and then again when harvesting is imminent.

So if they are green, how do you know when they are ripe? It can be difficult but the newer varieties blush red instead of yellowish-green as they become ripe, making it easier to discern. The texture of the fruit will also clue you in to its readiness; it should be firm but yield to gentle pressure. You can pull Green Zebras early for tangy fruit or leave on the vine to sweeten. A word of warning, however, if you leave them on the vine too long, they tend to get mealy.

Green Zebra tomato plants are a worthy cultivar to add to the garden and enliven salads and other dishes with their tangy, sweet flavor and eye-popping color. Plus, it’s just plain fun as a gardener to broaden your vegetable growing horizon and you can harvest the seeds to give to a friend or coworker which will boost Green Zebra’s claim to heirloom status.