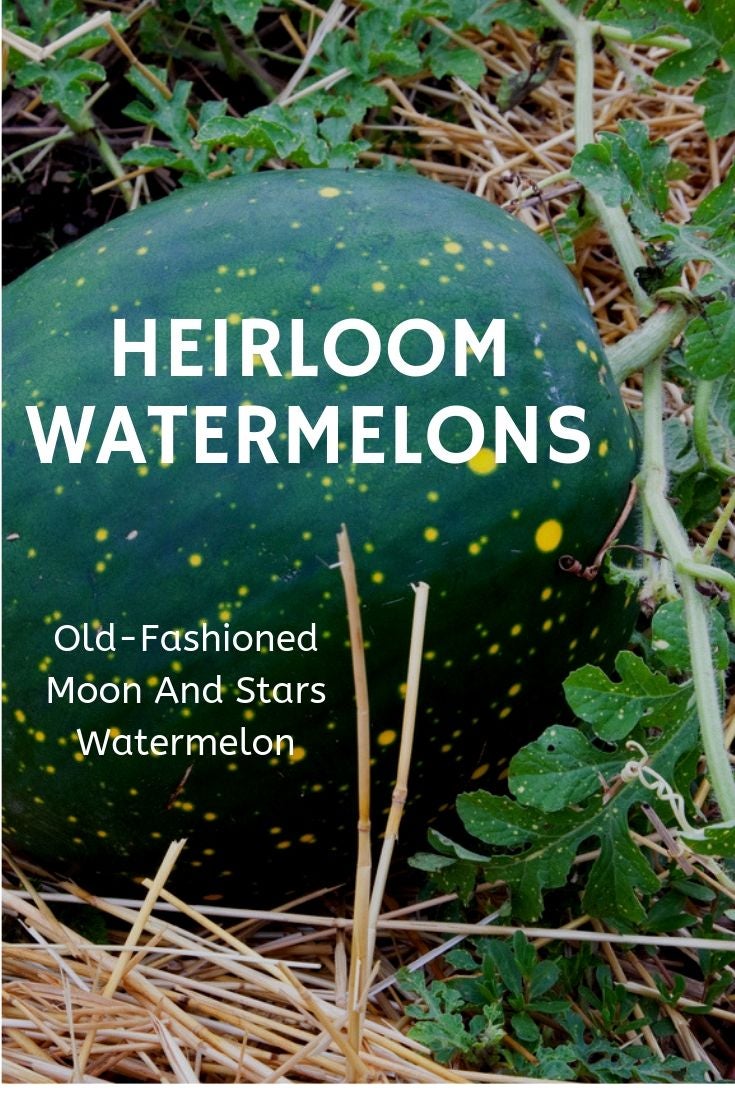 I want to be the one to come up with the creative and colorful common names for plants. Take Moon and Stars watermelon, for example. An heirloom watermelon, Moon and Stars is aptly named. It is a medium to large watermelon variety that has recently been rediscovered and popular once again. Its appearance is appealing, but the taste is “out of this world.”

It is important to preserve our heirloom produce varieties. Many of these were developed by botanists and students of plant propagation, but others were just happy accidents. Seeds from many of these plants were passed down generation to generation, preserving unique varieties that had quirky appeal for one reason or another. Moon and Stars is once such fruit.

The old-fashioned Moon and Stars watermelon is a dark belle variety with deeply green skin. It was originally introduced by Peter Henderson and Co. in 1926. At the time, a packet of seeds was only 20 cents. Can you imagine? My, how times have changed!

About the Old-Fashioned Moon and Stars Watermelon

Among heirloom watermelons, this is a very visually appealing variety combined with superior flavor. The deep green, slightly rippled skin is dappled with small bright yellow flecks and one or two larger irregular spots – hence, the sun and moon moniker. The plant’s foliage is even speckled with golden markings.

The fruits are oblong to oval and can be diminutive 8 pounders (3.6 kg.) to 40-pound (18 kg.) monsters. Seeds are white and the flesh is pinkish red, sweet and delicious. This is an open pollinated melon, so if you want to save seed, make sure there are no other melon varieties nearby.

Seeds can be ordered online from that nurseries that specialize in heirloom varieties. If you are lucky enough to get hold of some seed, sow directly outdoors in warm regions. Northern gardeners should start the plants indoors 8 weeks before the date of the last frost.

From seed to fruit in good conditions, harvesting will commence in 95 days. Watermelons need well-draining soil but plenty of water. Water from under the leaves to prevent powdery mildew. Don’t forget to save your seeds for the next year and share some with your neighbors. This is a great way to spread the word about this beautiful and delicious heirloom melon.