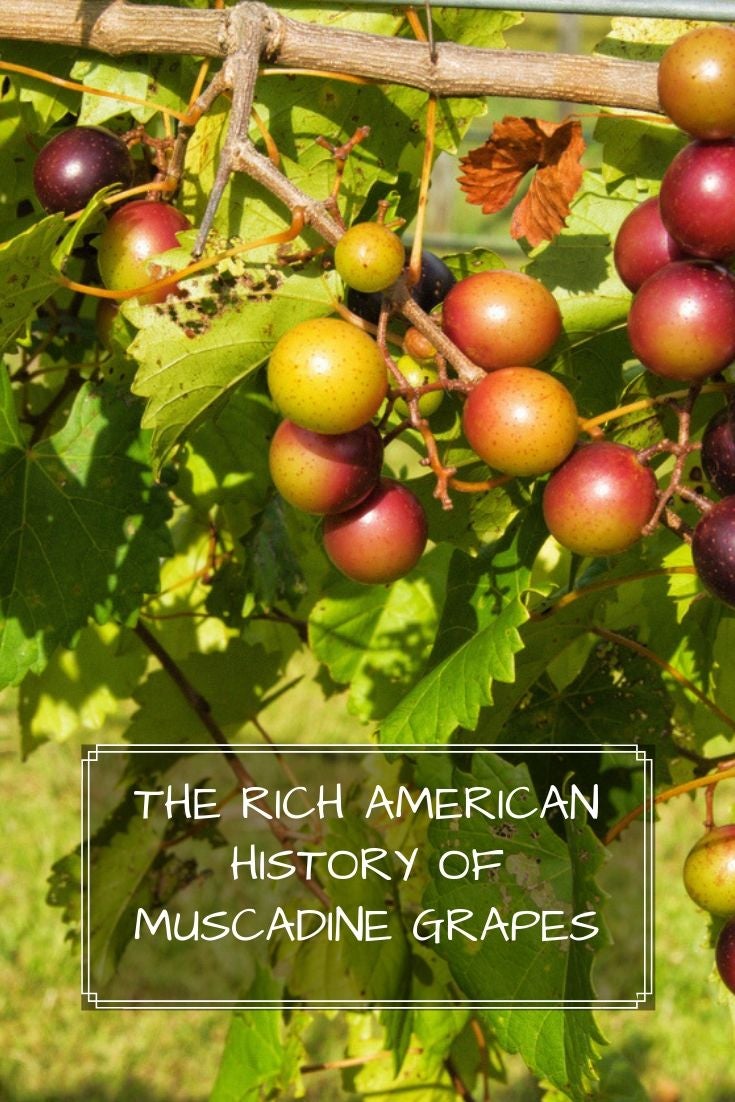 Native Americans dried wild muscadine grapes long before European explorers discovered the continent. They used the grapes not only as a food source but also as a source of blue dye. More recently, muscadine grapes have made their way into pies and jellies and the ubiquitous Southern favorite muscadine wine.

Enter the early English explorer Sir Walter Raleigh, who in 1584 marveled at the cornucopia of abundance, with muscadine vines growing on everything from the sand to the hills and on the plains and even up into the towering cedars.

Wild muscadine grapes are also known as Southern fox grapes or, my favorite, scuppernongs – just because it’s fun to say. My entertainment aside, the grape was named ‘Scuppernong’ after the area in which it was discovered by Isaac Alexander of North Carolina, who originally dubbed this bronze variety ‘Big White Grape.’ I guess he needed a catchier name.

As time passed, the name ‘Scuppernong’ became synonymous with all muscadine grapes. This is actually a fallacy in that scuppernong is only one of a number of cultivars. Dark fruited muscadines are more reliably referred to as Bullis and its variations such as Bullace, Bullet grape, or Bull Grape.

While ‘Scuppernong’ bronze and ‘Thomas’ black are the most recognizable of the cultivars, 100 years of breeding has yielded new and improved varieties such as Carlos, Doreen, Magnolia, Nesbitt, Noble and Regale, all of which are self-fruitful. Other cultivars such as Fry, Higgins, the aforementioned Scuppernong, and Jumbo require a partner for pollination.

Muscadine wine may become more popular outside of the American South. More than 400 years after English explorers lauded the prolific vines, muscadine grapes are in the news as one of the newest health foods. Scientists with the USDA’s Agricultural Research Service have noted that the muscadine grape contains large quantities of resveratrol. Resveratrol has been noted in both French red and white wines and is touted as being able to lower cholesterol and the incidence of coronary heart disease. Cheers to that!

Tell us what you think: Leave a comment
9 people are already talking about this.
Printer Friendly Version
Read more about Throw Back Thursdays
<PreviousNext>
Did you find this helpful? Share it with your friends!
FacebookTweetPinEmail