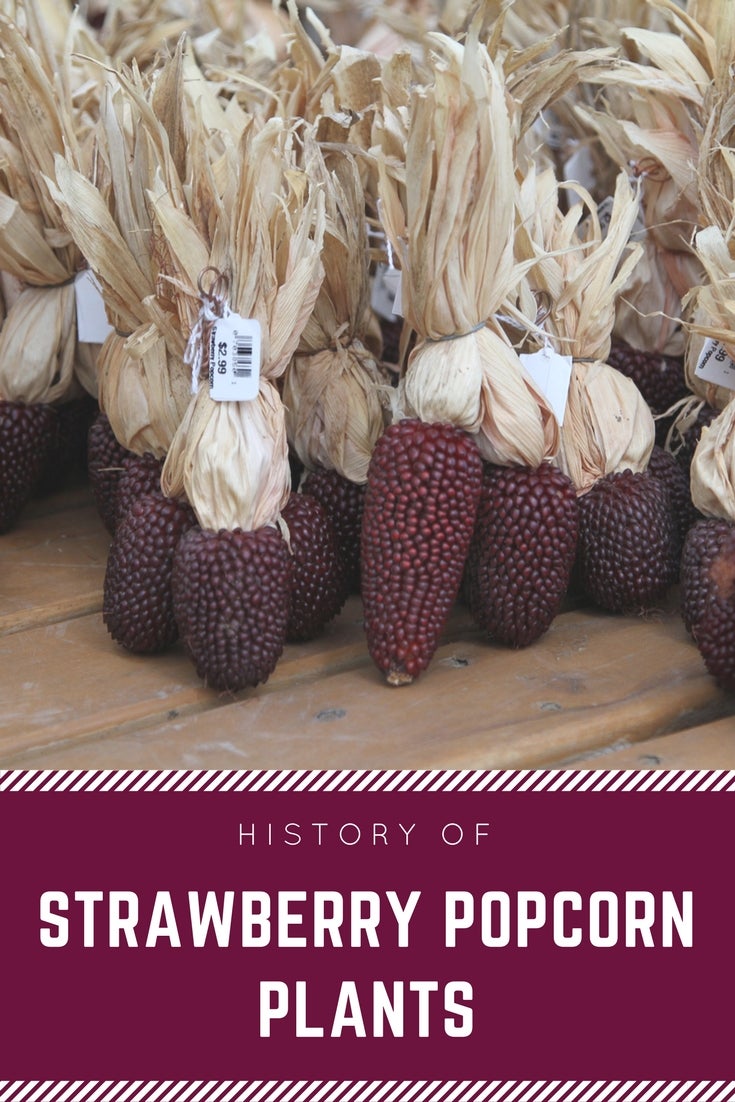 Image by Jim, the Photographer

There’s a new corn on the block. Okay, it’s not new, it’s actually an heirloom popcorn variety called strawberry popcorn. What could be more fun than growing your own popcorn, in particular, a strawberry popcorn heirloom? Not only is the name intriguing, but wait until you see the gorgeous plant and accompanying ears of corn.

Strawberry popcorn heirloom plants are compact, just 5-6 feet in height, with buff colored foliage bearing two or so small 2- to 3-inch burgundy red ears. The maroon ears are shaped much like and reminiscent of strawberries, which are sure to thrill the kiddies. The end result, once harvested and dried, will delight children of all ages as the kernels pop and magically turn from red hued to white.

The history of strawberry popcorn is a mystery, at least to me. I was unable to locate any mention of the heirloom in historical references. What can be said about the plant is that it or its relatives were thought to have been domesticated by the Olmec and the Mayans. Trading spread corn, or maize, throughout the Americas by 2,500 BC, followed by European introduction of the crop.

Sow the seeds in full sun in well-draining, compost rich soil after all danger of frost has passed for your area. Either plant several rows or plant in a circle or clump to facilitate pollination. Space the seeds 8 inches apart. Feed with an all-purpose vegetable fertilizer twice during the growing season.

Your adorable magenta red corn will be ready to harvest in about 100 days. Allow the ears to dry on the stalk for a month if using them as decoration. If you’re end goal is popcorn, let the ears dry for an additional month after picking. Use the stalks in combination with a mélange of pumpkins, gourds and dried cobs to create a colorful fall harvest motif.

For perfect popcorn, remove the kernels from the cob by twisting it or by rubbing two cobs together. Add oil and just three kernels of the strawberry popcorn to a large pot, cover and cook on medium high heat until you hear the kernels pop. Remove the popped kernels; they were just to test to see if the oil was hot enough to pop. Add the rest of your kernels to the hot oil and cover the pot. Take the pot off the heat for 30 seconds and then replace it on the heat. Shake the pot around to toss the kernels. Listen carefully. When the popping slows after 2 minutes or so, remove the pot from the heat.

Season the popcorn with sea salt, kosher salt, or iodized salt and butter, or go crazy and add nutritional yeast (better than it sounds), grated cheese (amen!), honey, dried herbs or even caramel and chocolate (hallelujah!).

Image by Jim, the Photographer