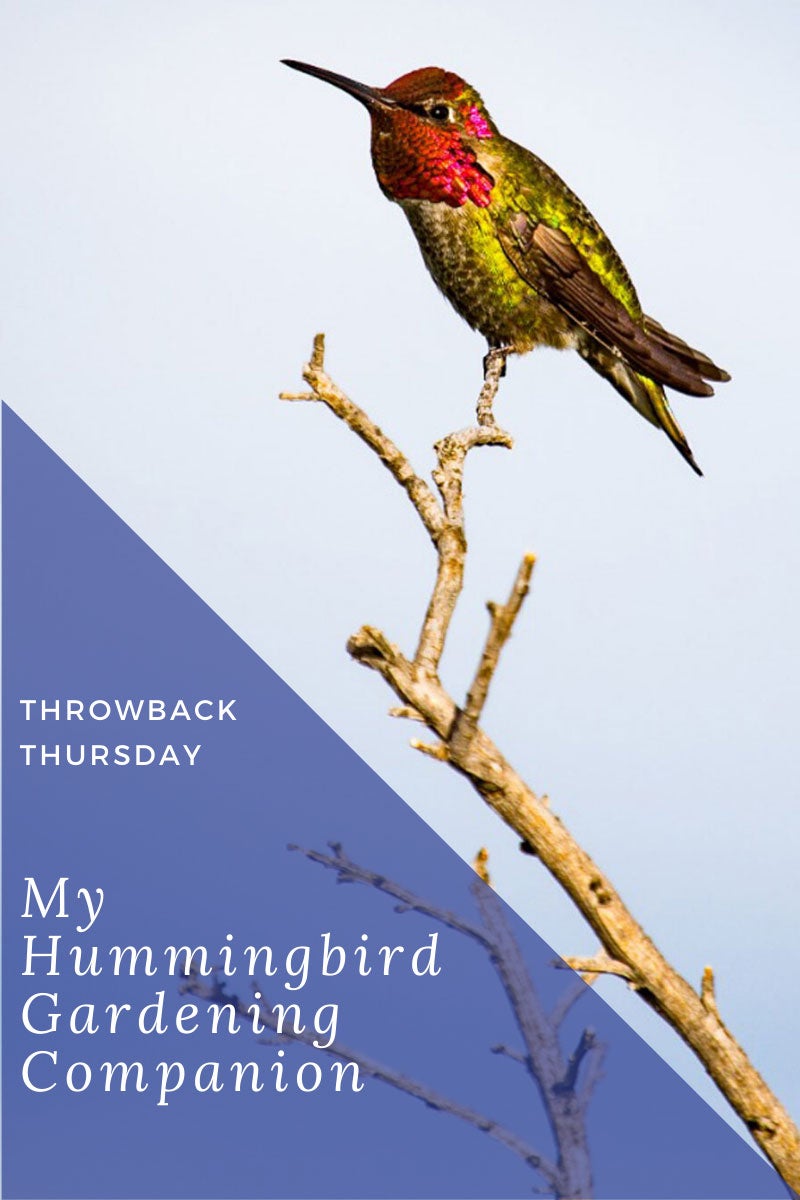 Who would’ve ever thought one hummingbird in my garden could have taught me so much? It’s true! An unlikely teacher for sure but a companion in the garden that lives on in my heart.

For eleven years, I lived on 38 acres of dense wilderness, right on the beautiful coast of Oregon. The air was pristine, although some afternoons its bluster could drive me indoors. In a thick forest, abundant with wildlife and only the roar of the silvery Pacific, my mate and I carved out a homestead with gardens, a lawn and natural landscaping. Taming a yard in the mellow coastal summers became a futile obsession.

Our home sat on a promontory, with trees and vegetation growing up around the edges of a deep ravine that surrounded the back half acre.

There was a spindly little alder tree on the cliff’s edge. Nearby, I’d planted a huge patch of lithodora that demanded frequent weeding and trimming. One sunny day, crouched on my knees working in a sea of blue flowers, a tiny hummingbird landed on the top branch of that frail little tree. He had come remarkably close. We watched one another tentatively – he, sitting and resting, me digging and tugging. I stopped for a moment, sat back and stared at him.

As we connected – psychically, or energetically (I’m not sure how to describe it), he flashed his iridescent, ruby red throat at me in slow motion, a greeting that surprised me to the core. I thanked him for the sweet gesture and, with a pounding heart, went on with my body-taxing work, as he flitted off in search of whatever hummingbirds search for in the summer.

I began to see him every day perched in the exact same spot, sometimes hanging on tightly as the wind made the small branches bounce and sway. As soon as we looked at one another, the brilliant red flash would stun me, again and again. We began a daily routine of greeting one another. I would send my inexplicable love to him, he would send his bright signal back to me, and I thanked him, each and every time. I knew this was an unlikely relationship. I tried to explain it to friends and family, who smiled and nodded at me sweetly. They eventually did see him for themselves.

When winters arrived, my tiny friend disappeared. But early each summer he returned, and we resumed our daily, pulsating exchange of greeting and gratitude. These reunions continued regularly every summer for several years. Someone asked me how I could know, year after year, if it was the same bird. I just knew. Like you know your own child in a crowd. It was him.

As I toiled to beat back the ever-encroaching wilderness, this creature became a well-known feature in my life and yard, reminding me that any activity in nature, whether manual labor or just smelling a flower, is a joy and a blessing. He deepened my sensibilities in ways I’m still comprehending.

We added a small building to the property. A tractor or backhoe inadvertently razed the little alder tree. Very shortly afterward, I left that magical place and never returned, though I have never forgotten this unlikely teacher and companion in the garden. Another lesson from my beautiful friend: Everything is fleeting, and change is inevitable. My bond with him changed the way I view many things – birds and wildlife, as well as the profound connection among all living beings.

Tell us what you think: Leave a comment
6 people are already talking about this.
Printer Friendly Version
Read more about Throw Back Thursdays
<PreviousNext>
Did you find this helpful? Share it with your friends!
FacebookTweetPinEmail