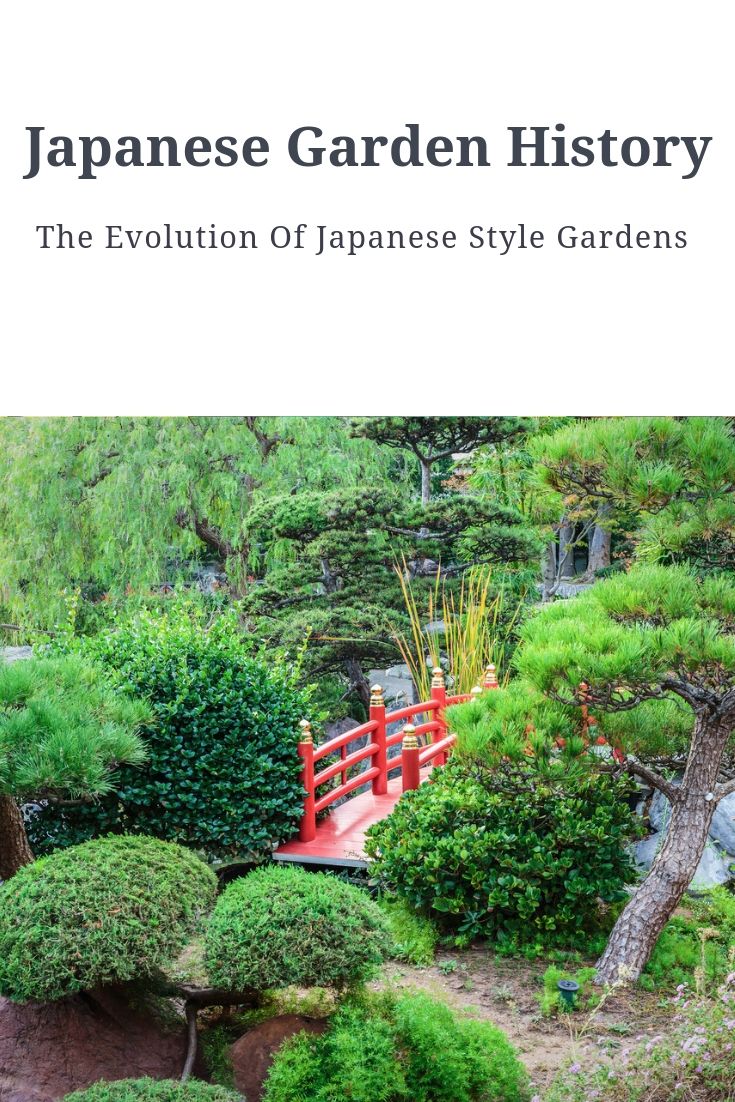 In ancient times, plants were grown mostly as food crops or medicinal herbs. The average family was only interested in stocking up on food and medicine to survive yet another winter. They did not have the time or space to waste on growing plants purely for their beauty. As time progressed and societies evolved, though, it became a sign of stature in many cultures around the world to grow ornamental gardens. People with wealth or nobility decorated their properties with miniature replicas of natural landscapes they had seen in their travels. This early natural garden style has specifically endured throughout Japanese garden history for thousands of years.

When you think of a Japanese style garden, you probably picture ponds or streams with strolling paths and bridges, vast areas of white sand or pebbles accented by large stones, and unique contorted or shaped trees or shrubs. These common elements have defined Japanese gardens for thousands of years. They represent not only yin and yang, the natural opposing forces of nature, but also the four elements – earth, air, fire and water.

Large rocks represent mountains, while bamboo fences behind garden beds represent dense forests. Winding paths and bridges represent the path to enlightenment, or nirvana, while decorative lanterns represent all four elements in sync, guiding our way and pressing us onward.

Though nature and the elements have been represented in Japanese gardens for thousands of years, different garden styles have dominated different eras of Japanese history. The Japanese were actually the first people to print and mass produce texts on books of garden designs, making the history of Japanese garden styles easy to trace. As with most cultures, early Japanese gardens were mostly used to adorn the property of wealthy, noblemen or temples and shrines. These first gardens were designed in what is known as the Paradise Garden Style, which oftentimes included ponds with lotus flowers, arching bridges, pavilions and lots of trees. They were gardens created to honor the nature spirits.

When Buddhist monks from China came to Japan, they brought with them the concept of designing gardens to represent yin and yang, and the elements. The first Buddhist gardens of Japan were designed in the Karensansui style, which incorporated large dry rock or sand zen gardens with small inlands that contained large rocks and plants. These were sometimes huge elaborate gardens with ponds or lakes that boats could enter by passing under highly arched bridges. These Karensansui gardens were only built around Buddhist shrines.

The next popular garden style in Japanese history was the Tsukiyama Japanese garden, which incorporated hilly landscape beds, small ponds, large stones, streams or dry creek beds, bridges and meandering paths. This ancient Japanese garden style is still popular today. Tsukiyama garden styles paved the way for the Chaniwa garden, also known as the traditional Japanese tea garden. Chaniwa gardens were designed with two gardens, the outer garden and the inner garden.Visitors enter both gardens through elaborate covered gates. The outer garden contained plants, large stones and a path. The inner garden contained a gravel or sand zen garden, pond or reflecting pool, stone lanterns and the traditional Japanese tea house. At the gateway to the inner garden was a stone water basin with bamboo fountain. It was customary for visitors to wash their hands in this water basin before entering the inner tea garden. Today, the Japanese tea garden is still very popular.

The next trend in Japanese gardens was the stroll garden. Traditionally, the stroll garden was built around a pond or small lake. It included a strolling path that circled the pond where guests stroll along in a clockwise direction. The strolling path provided a clear view of the pond on one side and a dense landscape on the other side. Around this time, courtyard gardens also became a popular Japanese style. These gardens were designed as traditional Japanese style gardens, with all the elements represented, only they were designed on a much smaller level. In lieu of ponds, small fountains represented large bodies of water.

Today, many of the elements of ancient Japanese garden design are still incorporated in modern Japanese gardens. There are also more Japanese style gardens in other countries around the world than there are in Japan.