The Long History Of Pickling Cucumbers

Throw Back Thursdays
By Shelley Pierce | May 24, 2018
Printer Friendly Version 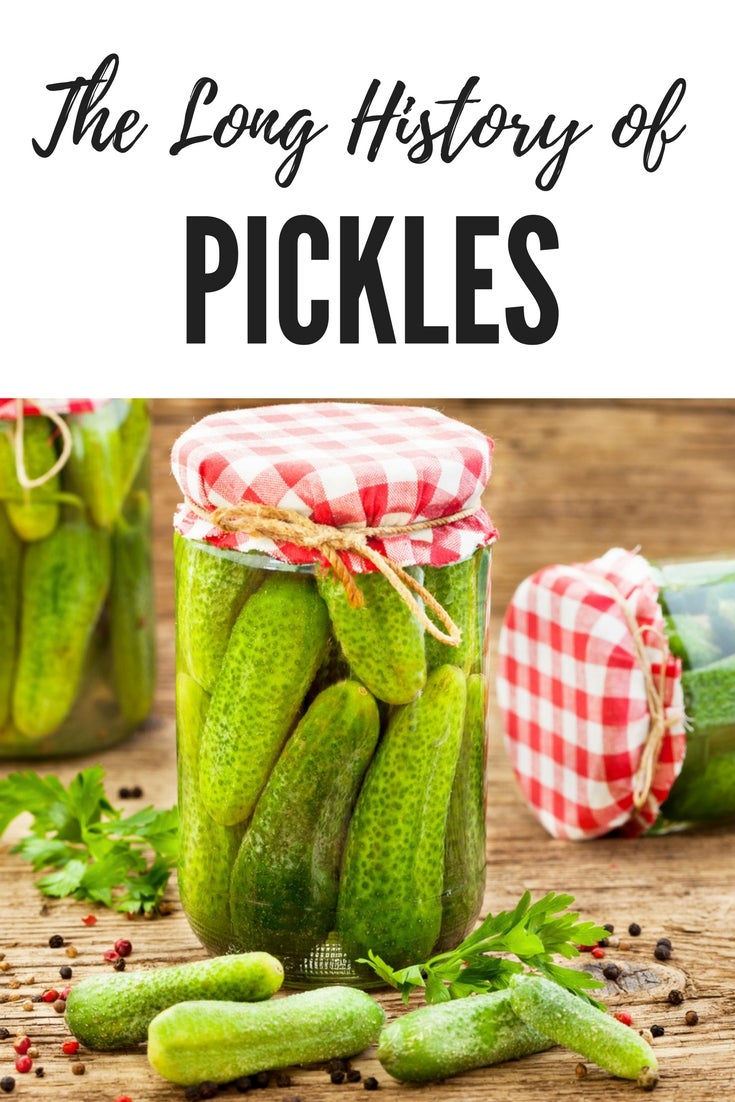 According to the N.Y. Food Museum, 5,200,000 pounds of pickles are consumed annually in the United States, which equates to nine pounds per person. While I like pickles, I can say with utmost certainty that I do not eat nine pounds of them per year. Not that there’s anything wrong with that”¦and to think these statistics are for the United States alone. I guess people like their pickles! So, who got us all into this pickle anyway? Read on to learn more about pickling cucumber history.

What is a Pickling Cucumber?

If you are fan of Vlasic or Claussen pickles or, better yet, your Grandma’s homemade dills, then you’re already familiar with pickling cucumbers, at least from a culinary standpoint. Pickling cucumbers are not one specific variety but, rather, a class of cucumbers that meet certain criteria which makes them favorable candidates for becoming a taste-bud approved pickle.

Pickling cucumber varieties are typically high yielding over a short duration of time, have a flesh with great taste that retains its ‘crisp and crunch’ post-pickling (no one wants a soggy pickle) and are the right size (think shorter or blockier) to fit into a pickling jar. Their skins are a little thinner in order to absorb all that pickling solution goodness (brine, vinegar, spices, etc.). And, while there are exceptions to this rule, pickling cucumbers tend to be lighter green in appearance, sometimes with light-colored stripes running down the length of the fruit.

What are Good Pickling Cucumber Varieties?

Making crave-worthy pickles begins by choosing the right kind of cucumbers, but it is also determined by your home preservation techniques and methods – the process can be trial and error until you get it “just right.”

Where did pickles get their name? The word “pickle” is either derived from the Dutch “pekel” or northern German “pÃ³kel,” which translates to “salt” or “brine.” Salt and brine, as you know, are two key pickling ingredients.

And as we continue to investigate what is a pickling cucumber, naturally we are going to want to know where they came from! You would have the answer to this pickling cucumber history question if you time traveled back to 2,030 B.C. where you would find cucumbers being pickled in Mesopotamia, when cucumbers were introduced to the Tigris Valley by inhabitants from northern India.

Along our vast historical timeline, you would observe many notable figures in history sharing an appreciation of pickled cucumbers. Aristotle (850 B.C.) praised pickles for their healing properties. Military giants Julius Caesar (c.100 B.C. – 44 B.C.) and Napoleon (1769 -1821) fed pickles to their troops to boost their physical and spiritual strength. Egyptian ruler Cleopatra (69 -30 B.C.) credited a diet of pickles to her good looks. Shakespeare (1564-1616) inserted many references to pickles in his plays. The list goes on and on. As I said earlier, people like pickles!

Companies such as Heinz (which started selling pickles in the late 1860’s) and Vlasic Pickles (started in Detroit in 1942) were instrumental in helping to introduce pickles to the masses. In fact, Heinz operates the largest pickle factory in the world in Holland to this very day. And we would be remiss if we didn’t consider the folks who refined and revolutionized our food preservation practices and processes (such as Nicholas Appert, Louis Pasteur, John Mason, etc.) that made pickling and canning possible in the first place.

So, as we consider this history of pickling cucumbers, let’s have a toast to honor those who made pickles possible with some goblets of pickle juice, of course!