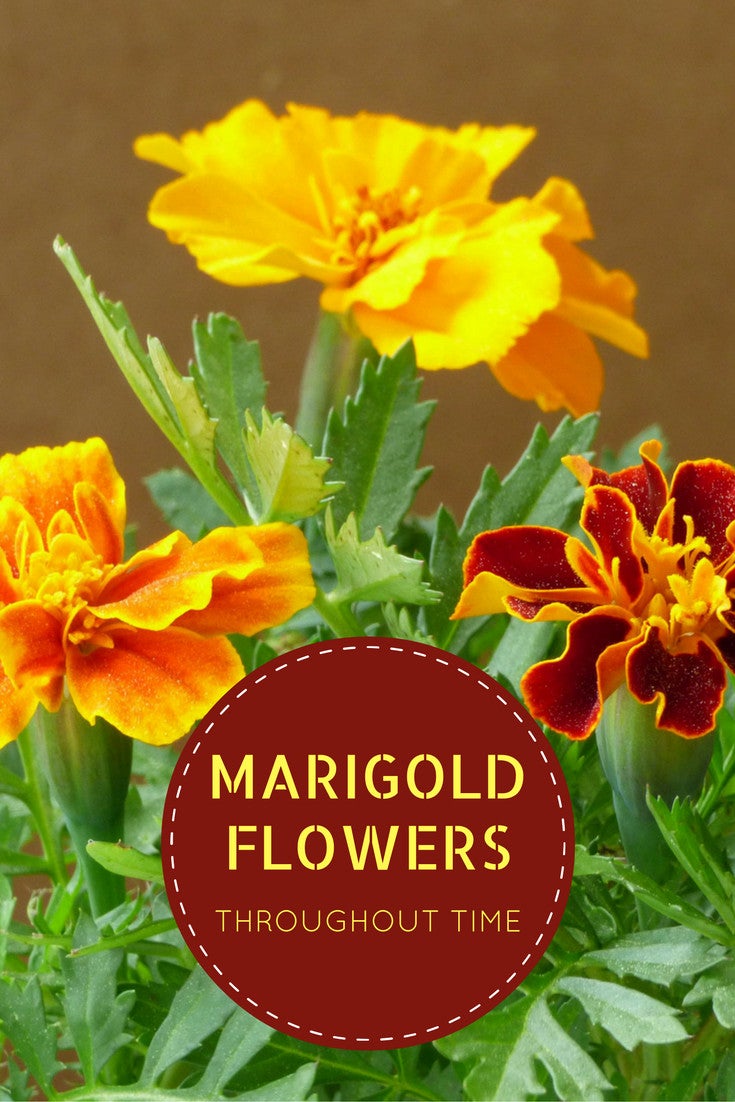 Marigolds are one of our most beloved flowers but they have many secrets few people know. These cheery blooms are native to the Americas and often confused with their cousins, the European calendulas. Since the Aztec period, marigold flower history has encompassed medicine, spirituality, cuisine and even magic. The many uses of marigold flowers throughout time weave an interesting history of marigolds and their importance in our lives, past and present.

As part of an annual flower bed or container, marigolds can’t be beat as they add their golden glory to accent other tones and hues. These sunny little flowers have more up their sleeve than just cuteness and All American innocence. Marigolds were once a sacred flower for the Aztecs, who attributed healing and even magical powers to the plant. There are many marigold plant facts that are confusing and untrue. It’s time to do some checking and find out the true story behind the mysterious marigold.

The only thing certain is that marigolds were first grown in the New World. The plants are native to the Americas from Argentina to New Mexico and Arizona. The Aztecs raised the flowers and even bred them for bigger and better blooms. The scuttlebutt is that the Spanish took seeds from the Aztecs and, over time, these migrated to France. Hybrids and cultivars became a French specialty, especially in the Tagetes patula species, or French marigold.

From France, the seed made its way to Africa where a particular species of tall marigold became naturalized. These are the African marigolds (Tagetes erecta) that have become popular, but make no mistake they are still not from Africa, just very happy there now that they have made it to that continent. This moving around is why marigold flower history is slightly murky and difficult to sort out.

Marigold flowers throughout time have been used for a variety of purposes. Medicinally, they are used as an antiseptic and are even reported to cure hiccups. The plant also contains compounds which make it antifungal, antibacterial and anti-inflammatory. This amazing plant has been a part of treating humans for a very long time. Perhaps that is what made the Aztecs think it was sacred. The first recorded use of the plant as a medicinal was in De La Crus-Badiano Aztec Herbal of 1552.

The plant also has insecticidal properties. It is used for its essential oils and as a food color as well. In fact, in centuries past, the petals of the bright flowers were used as a substitute for saffron and colored things like butter and cakes. It was also a flavoring in soups and stews. Mexicans use it to decorate graves during the All Saints and All Souls celebrations. They are also part of Hindu ceremonial decor.

The history of marigolds gets more confusing when you start looking at species, similar plants and varieties. The question of origin is solved but throughout time people have called many plants “marigold.” Will the real marigold please stand up?

Scientifically, any plant in the Tagetes family is a New World marigold. The common name refers to the color and is derived from “Mary’s Gold.” A common misconception is that the English cousin, calendula, is a marigold. It is often called marigold but is not a true species in the genus Tagetes. The name Tagetes refers to an Italian god named Tages.

The species that naturalized in Africa was collected and taken back to Spain where it was mistakenly classed as a different species and called Flos africanus. It was known by this incorrect name until sometime in the 1700’s when the species was correctly designated. By the 1920’s, the plant was “reintroduced” to the Americas and its popularity soared.

Today, there are now hundreds of cultivars and hybrids from the original Tagetes. The plant now comes in varied colors, scentless, hybrids and triploids, providing a marigold for just about every taste and need.