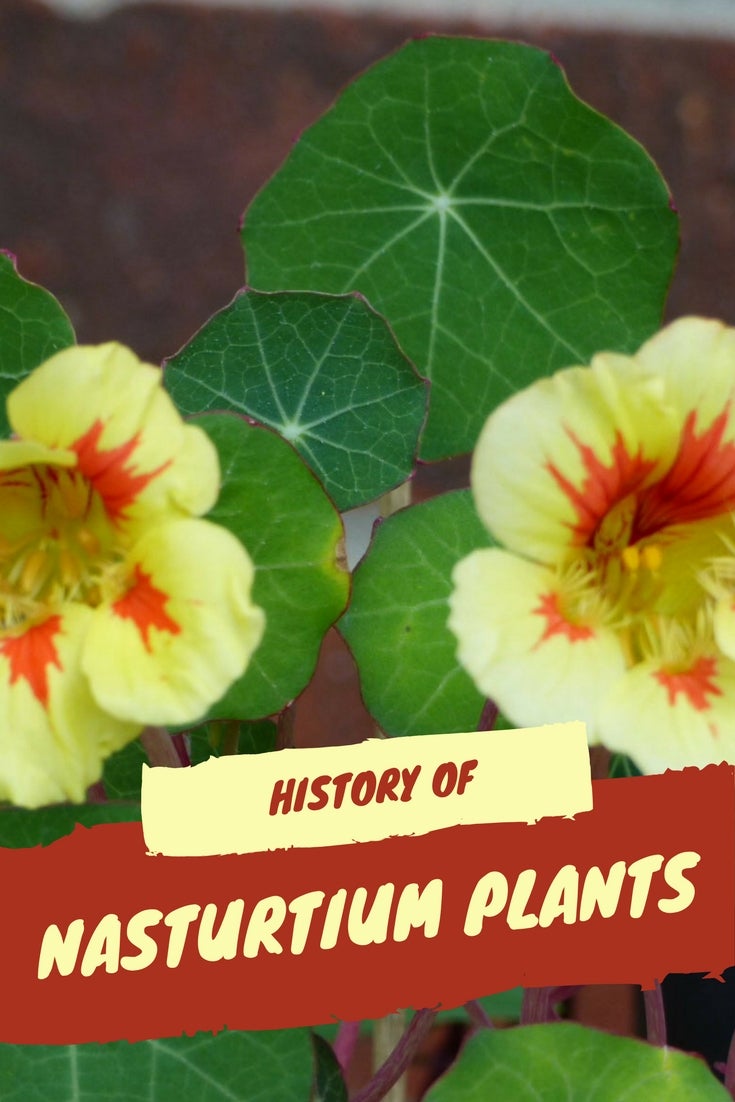 Nothing speaks classic more than nasturtium plants. These long-time favorites are far more than attractive garden specimens – they have a rich history behind them dating back for centuries. In fact, the familiar nasturtiums found growing in gardens today actually descend from a couple species native to Peru. Read on to learn more about the history of nasturtiums.

You may be surprised to learn that the name, nasturtium, came about from its peppery taste, touted to be similar to that of watercress – Nasturtium officinale. In fact, the Latin words for nose (nas) and tortum (twist) are thought to refer to one’s reaction upon tasting the spicy, bittersweet leaves of nasturtium plants. Yet, nasturtium was assigned the scientific name Tropaeolum majus. This is believed to be taken from the Latin word “tropaeum,” or trophy. Supposedly, the yellow-flowered nasturtium twining upon a lamppost was said to remind the famous botanist, Linnaeus, of the practice once used in ancient times of displaying shields and helmets of slain soldiers on the trunk of a tree at the scene of a battlefield.

And as names go, the nasturtium has many other monikers too. It has been referred to as the ‘nasties,’ Indian cress, monk’s cress and Capuchin cress (which is apparently a reference to the shape of the flowers resembling a Capuchin monk’s hooded cloak).

Of course, you can’t grow nasturtiums without knowing about their edibility. Yes, you can dine on these plants. All parts of the above-ground plant are considered edible and nasturtium plant history also reveals that it has long since been used for medicinal purposes too. Incas used nasturtiums as both a salad vegetable and a medicinal herb. Thomas Jefferson even planted them in his vegetable garden at Monticello (from at least 1774 onward). Interestingly, in one entry of his garden book, he categorized nasturtium as a fruit, indicating that he ate the pickled seeds, which were described as tasting like roasted capers. And speaking of seeds, nasturtiums even played a role in World War II. The peppery tasting seeds were ground up and used as a substitute for black pepper, which was difficult to come by and much more expensive.

Because the plant has antibiotic, antiseptic, and antifungal properties, the leaves or petals of nasturtium were often ground up to make an ointment to treat minor cuts and scrapes as well as acne and other skin irritations. Additionally, the leaves and petals were seeped in hot water to make a tea for alleviating respiratory infections, scurvy, urinary tract diseases, and stimulating the digestive tract. The flower is also said to be a great source of vitamin C.

Most nasturtiums grown in earlier days were the tall, trailing orange variety but as time progressed during the 19th century, breeders produced smaller, more compact types, similar to those we know today. Nasturtiums make great spillers in window boxes and hanging baskets. And the bush type nasturtiums can be used as aphid traps in the vegetable garden. Plant them in a full to part sun area with well-drained soil.