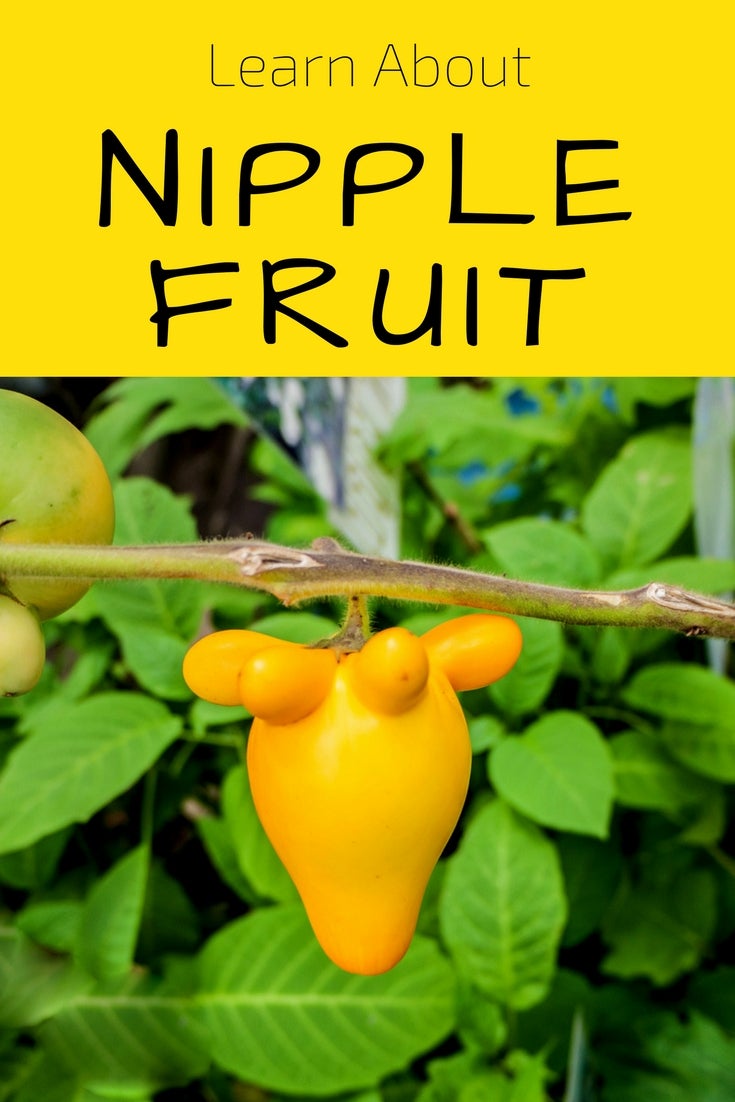 Unless you live in tropical South America, Central America or the Caribbean, you may not be aware of Solanum mammosum. Its scientific name demonstrates that the plant is a relative of tomatoes and potatoes, but the latter part also indicates some mammary connection. Therefore, it should be no surprise to find this plant is also known as nipple fruit. That isn’t the only name by which this plant goes, but some of them are more descriptive and slightly vulgar to certain ears. Of course, I will still mention them, but they will be further down this post for interested readers to uncover.

Nipple fruit plants are native to South America but have become naturalized in other tropical regions. The plant is an evergreen perennial which may get 2 to 3 feet tall with a similar spread. The woody shrub has dotted smooth gray bark and thorns. Leaves are large, velvety and sport defined purple veins. In spring, purple flowers around 1 ½ inch long with a white stripe and bright purple anthers appear. These are attractive enough, but the real surprise comes with the fruit. These have the distinct form of a human breast – if it had numerous nipples. Hence, the name. The fruit is bright yellow and may grow up to 2 inches long.

Solanum mammosum is primarily grown as an ornamental or curiosity. This is because the fruits are highly poisonous and not of value as a fruit crop. However, the fruit juice has detergent properties and there is some medicinal nipple fruit plant history. Traditionally, it has been used to treat athlete’s foot, irritability and restlessness. It should only be used under the advice of a professional, however, as improper usage could result in death. In China, it is thought to be good luck to have some branches in the home around New Year’s. The five fingers of the fruit may also represent good fortune in having 5 generations in the home.

Rather than be coy about the plant’s fruiting form, most regions that grow the plant have come up with their own descriptive names. The fruit does have a certain resemblance to a cow’s udder, which is one of its names but so are the following:

While the more tender readers amongst us may blush at the second in the list, the plant does bring to mind visions of naked harem girls and other such trashy scenarios. It’s not the fruit’s fault it develops in such a way but, interestingly, if you cut it in half, it also appears to resemble a head.

The nipple fruit is a constant surprise and a wonderful natural phenomenon that tropical growers can enjoy for themselves. The rest of us will have to content ourselves with a few mental pictures and a good imagination boosted by colorful names.