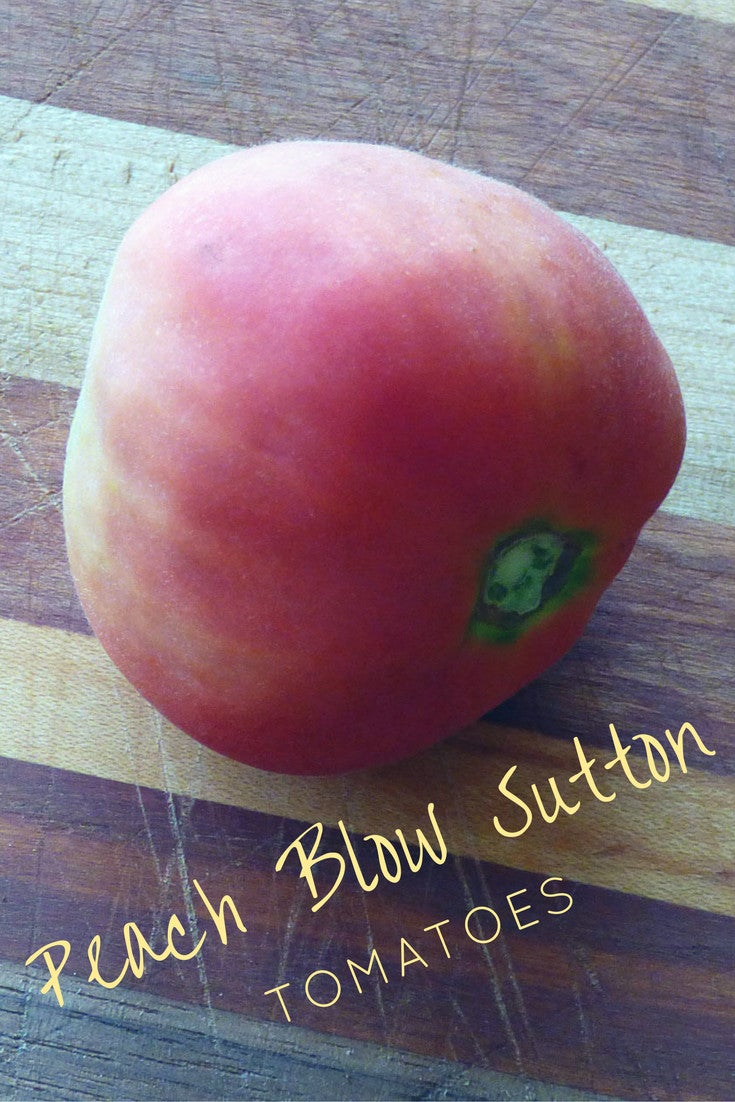 Image by Gardening Know How

Tomatoes (Solanum lycopersicum) have a long history. In fact, you may not know it, but at one time the scrumptious fruit (yes, fruit) was frowned upon – even considered to be poisonous. For instance, it was thought that if you ate a tomato, its poison would turn your blood into acid. Okay then. Because of this, they were largely grown as ornamentals rather than as food. Of course, we Americans eventually came to accept tomatoes into our gardens and have since grown numerous types over the years – heirloom varieties being quite popular. And one of these would be the Peach Blow Sutton.

So where did tomatoes come from? They originated in South and Central America, and from there Spanish explorers brought them back to Europe. While they became popular there, they remained not-so-popular upon making their way to the U.S. – at least not until they were grown by Thomas Jefferson and subsequently used in recipes. By the late 1800s, tomato seeds could be found in catalogs, and in 1897, the Campbell soup company secured its place in history with the introduction of condensed tomato soup.

Back to our current heirloom. Plump, round and bursting with juicy sweetness and gorgeous color, Peach Blow Sutton tomatoes were introduced to the world by Sutton and Sons Seed Growers of Reading, England in the late nineteenth century. According to Peach Blow Sutton info, the tomatoes were named “Peach Blow” in reference to a type of popular glassware (with a peach skin appearance) that was popular in the Victorian era. As the name suggests, Peach Blow Sutton tomatoes display a peachy pink color, soon ripening to a fuzzy, pinkish-red. This heavy cropper, having anywhere from 4 to 8 fruits in a cluster, was once described as one of the “finest tomatoes ever seen and grown.”

Growing these heirloom tomatoes is no different than growing any other type of tomato. In fact, this variety tends to be more disease-resistant than many other varieties. But don’t expect to find this plant at your neighborhood garden center. You’ll probably need to purchase seeds from a company that specializes in heirloom vegetable plants.

Start the tomato seeds indoors about six weeks before the last expected frost in your area. Paper or peat pots work well because you can transplant the entire pot into the garden, which prevents damage to the fragile roots. Plant the seeds about Â¼ inch deep in a tray filled with good quality commercial potting mix. Tomatoes require plenty of bright light, so place the pots under cool, white fluorescent bulbs for 14 to 16 hours every day.

Fertilize the seedlings every seven to 10 days with a liquid fertilizer diluted to half strength. Move the tomatoes outdoors when nighttime temperatures are consistently above 55 F. (12 C.) and the seedlings are 8 to 10 inches tall. If you’re concerned about an unexpected frost, protect the plants with hot caps. Be sure to provide a tomato cage,Â stakes or a trellis while the plants are small.

Tomatoes need a location in full sunlight. Additionally, the plants benefit from soil amended with manure or compost, along with a dose of all purpose fertilizer. One secret to growing any type of tomato is to go against your gardener’s instinct and bury most of the stem, as planting deeply builds strong roots that sprout all along the buried stem. One way to accomplish this is to dig a wide hole, then transplant the tomato somewhat horizontally at a slant so that just a few leaves on the upper part of the plant are above the ground. Handle the plant by the root ball and avoid touching the stem as much as possible. This method has always worked well for me.

Once the plants are established, water them deeply and infrequently, but consistently, by providing 1 to 3 inches of water per week. Don’t let the soil become either soaking wet or bone dry. Avoid irregular irrigation, which can causeÂ cracking and blossom end rot. Mulch is beneficial, but it’s best to wait and apply it when the soil is at least 75 F. (23 C.). Fertilize tomatoes lightly because too much fertilizer may create beautiful, bushy plants and no fruit. Feeding the plants one and two months after transplanting is plenty.

Image by Gardening Know How