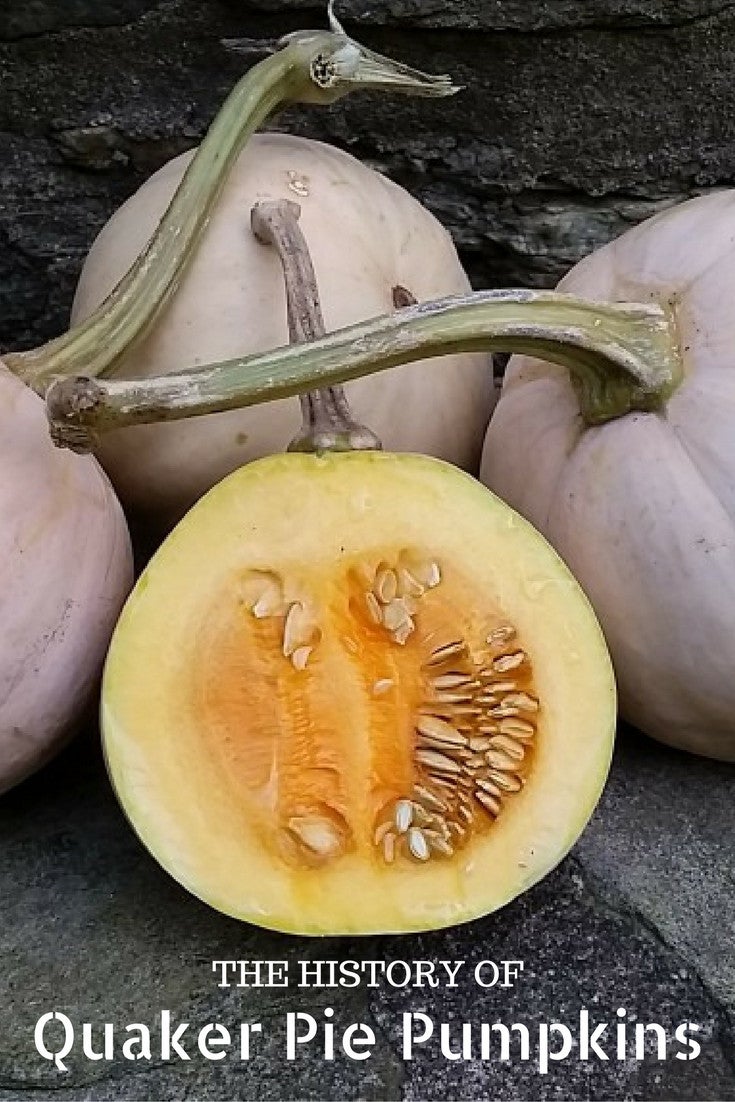 Burpees is a seed and plant company of generations of repute. Their introduction of Quaker pie pumpkin seeds solidifies their position as one of the leaders of home crop selection. Quaker pie pumpkin plant really did come from a Quaker homestead. What other surprises does this magnificent pumpkin have to reveal? Read a bit further for the history of Quaker pie pumpkins and details on its attributes.

Heirloom pie pumpkins come in all shapes and sizes, colors and textures. When it comes time to order my seed for the next year, I select a few tried and true varieties and then mix things up with something new. This year I tried growing heirloom pumpkins recommended to me by a friend. They were Quaker pie pumpkin plants and the results were stupendous. Regulated fruit appeared quickly in cookie cutter form and size. These pumpkins don’t have a traditional Halloween pumpkin appearance but are just as exciting for their density, flavor and flesh colored skin.

If you think the only pumpkin worth growing are the Jack-O-Lantern types, think again. Quaker pie is a small squash with smooth creamy, almost blushed skin and firm ivory flesh. They hail from a small Quaker farm where the seed was consistently saved and grown year from year. Somehow, the plants which grew in Washington County, New York were discovered by W. Atlee Burpee and introduced commercially in the late 1800’s.

Apparently, the strain was also transported to Africa by Quaker missionaries and several cultivars were created from the original parent. Today, one of the most popular offspring of the original Quaker pumpkin is this variety.

Pumpkin pie is a winter holiday staple. Some pumpkins are too seedy, stringy and lack flavor for a good sweet pie. Quaker heirloom pie pumpkins have sweet, creamy white, firm flesh with a hint of coconut flavor. It doesn’t make the characteristic orange pumpkin pie but something with a twist and some tasty surprises.

These easy-to-grow squash (yes, they are technically squash) can grow 15- to 18-foot long vines, so make sure they have space to ramble. The male squash flowers are huge, up to 8 inches when in full bloom, and an excellent source for stuffed blossoms. Even the leaves provide ornamental appeal with finely cut lobes and decorative gray mottling.

Each squash will weigh in at an impressive 10 to 12 pounds, which is nothing to sneeze at when you consider the relatively small size of the fruit.

Quakers require full sun and organically amended, well worked soil. Start seed indoors 4 to 6 weeks before your last frost date or outside a couple of weeks after the last cold snap. Direct sow in hills with 6 to 8 seeds per dome.

Provide plenty of water and watch for pests and mildew, two of the most common issues with squash. Try not to overhead water, as this increases the chance of powdery mildew, a disease which coats the foliage and diminishes photosynthesis.

Harvest your pumpkins in around 120 days or when they are firm, creamy with a flesh tint and thump soundly. Pumpkins can be stored for up to a month in a cool, dry location or you can cook the flesh and freeze or can it for later use.