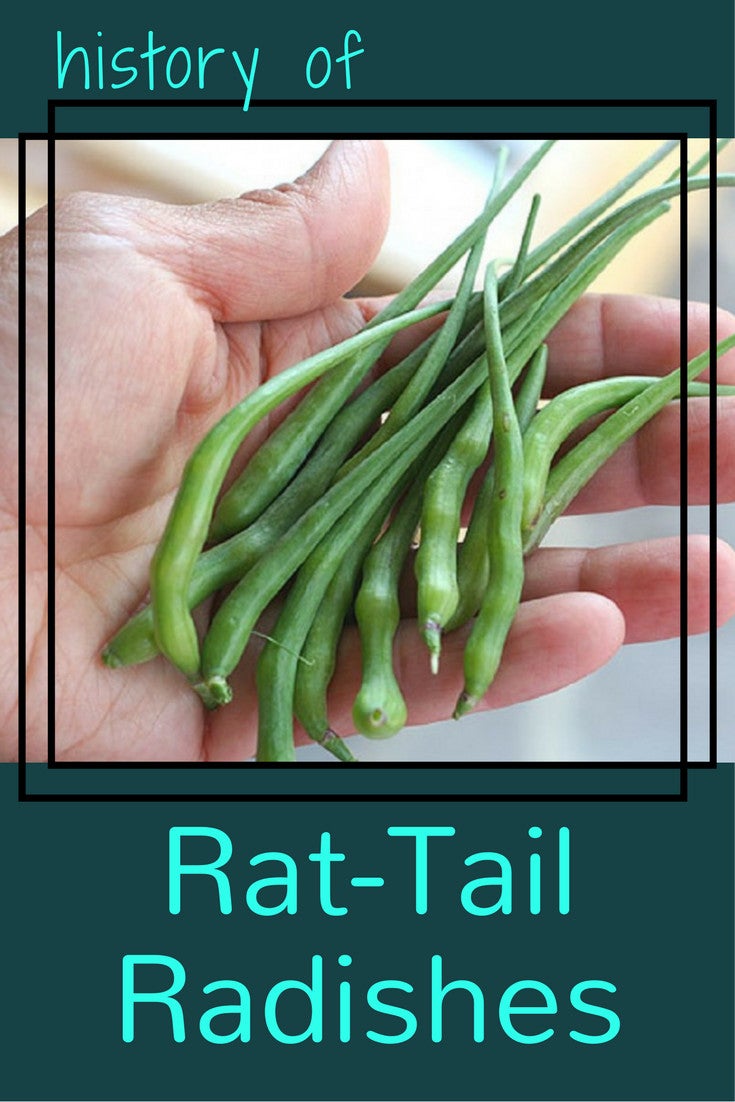 Looking for an old but new again, unique heirloom that is not only decorative, but absolutely delicious? Look no farther than the Rat-Tail radish plant. What’s that, you say? It is a radish, as the name implies, but a variety that is cultivated for use of its edible seed pods rather than the usual roots. Interested in growing Rat-Tail radishes? Read on.

Its unpleasant sounding name not-withstanding, Rat-Tails have a bit of a royal reputation, but I’m getting ahead of myself. Rat-Tails were introduced to English gardens in 1815 via Java. They were exhibited by Mr. Bull at the International Horticultural Exhibition and touted as a revolutionary new vegetable whose pods would grow 3 inches overnight and mature at 3-4 feet long! As you may imagine, this created quite a sensation and they became popular throughout Europe and North America, and even in Australia. The claims were for the most part, untrue, so by the turn of the century, Rat-Tail’s popularity waned and they were rarely grown except as oddities. During its past hay day though, the Rat-Tail is said to have been found growing in Sandringham, the seat of the Prince of Wales and, supposedly, enjoyed by him at his dining table.

Radishes can be found in the family Brassicaceae, amongst which are cabbages, turnips, watercress, rocket and garden cress. All of these plants have similar seed pods, making the grouping quite logical, especially to a gardener. WhileÂ radishes are generally grown for their root, growing Rat-Tail radishes (Caudatus group) are cultivated for the pods, which vary in size but are generally as long as 6 inches, that do indeed resemble rat tails. Long popular in Indian and other Asian cuisine, these pods are once again becoming trendy. They are easy to grow, tolerate heat better than root radishes, and continue to produce pods long after root radishes are finished.

Rat-Tail plants grow 3-4 feet tall and will continue to produce pods through the growing season, especially if the pods are picked and branches pruned. You may need to stake the branches since their prolific flowering may cause them to droop. Rat-Tails have quite a few other names too, including serpentine bean and monkey-tailed, and are referred to as “aerial” radishes.

Varieties of Rat-Tailed radishes may have white flowers with 3- to 5-inch green or purple pods, or green pods tinged with purple. Long purple podded aerial radishes are 8-12 inches long with pink blooms and reddish-violet stems. You can’t go wrong, as all of them have stunning displays of color and texture.

Sow seeds for this hardy annual at a depth of Â¼ to Â½ inch deep 2 weeks after the last frost. Thin them to a foot apart and eat the thinnings! Toss them in a salad; they are delish. Pods will appear between 40-50 days, with the lowest ones ripening first. Pick them when small, about pencil thick, when they are at their most pungent and crisp.

Reminiscent of a radish, Rat-Tails have a milder radish flavor with a texture akin to a juicy chili pepper. You can eat them raw as a snack, or with a beer as the Germans do, or cook them. They are often found pickled in vinegar with peppercorns,Â allspice and mace, which, again, would be good with a beer. With their subtle spice, they make a great addition to stir-fries and curries and a curiosity on the crudités platter – all the way around a fun, unique and flavorful veggie.

As if this isn’t enough, the sweet scented blossoms are addictive toÂ butterflies and other pollinators, making it a useful addition to the garden, especially at the peak of summer when many flowers are dormant. But there’s more! The interesting pods, when dried, retain their purple color and sinuous shape, perfect for the inclusion in dried flower arrangements. Really, I can’t think of any reason you shouldn’t plan to include Rat-Tails in your own home garden.