Learn About Safflower History And Uses 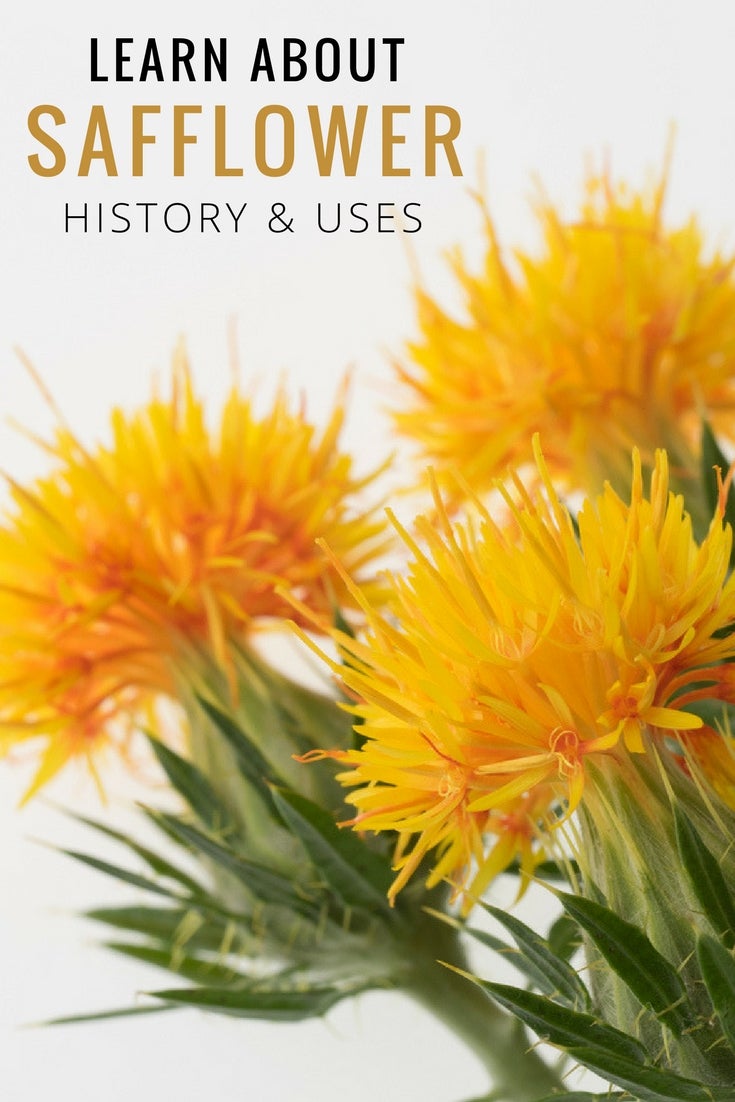 Safflower (Carthamus tinctorius) is an unusual but lovely addition to any garden. It produces brilliant red, yellow or orange flowers atop stems (up to 3 feet tall) lined with spiny thistle-like foliage. It has the distinction as being one of the oldest crops known to mankind and is believed to have been grown in Egypt over 4,000 years ago, and possibly in the Euphrates before that. As you can imagine, a plant that has withstood the test of time for so long has been utilized in many different ways by different cultures since its beginnings in the Fertile Crescent region. Read on to discover some safflower history highlights and the uses of safflower plants in gardens over the years.

In Ancient Egypt, safflower brightly dyed bindings used to wrap mummies as well as provided an orange tint to ceremonial ointments used in religious rituals. Garlands of safflower blossoms were placed in tombs (such as the pharaoh Tutankhamun), with the intent of providing comfort to the deceased in afterlife. Charred safflower plants were used to make Egyptian Kohl (cosmetic eyeliner). Safflower oil was also used to light the lamps of the pharaohs.

In the 2nd century BC, safflower was introduced to China by the Chinese diplomat Zhang Qian (Han Dynasty) upon his return from expeditions to the west. Dried flowers and flower extracts are a common component of many Chinese medicines. Safflower petals, in particular, according to traditional Chinese medicine, promoted blood circulation and facilitated the healing of fractures, contusions and strains. Safflower was also utilized in ancient Chinese cosmetics (blush – starting in 1760 BCE) and as a clothing dye. Chinese women massaged their scalps with safflower oil to maintain lustrous and healthy hair.

Safflower made its way into Europe from Egypt in 1551. If you’ve ever used the phrase “red tape” to describe government function (wouldn’t that be all of us?) then you’d be interested to know that safflower plays a role in that. In 16th century England, legal documents were tied together with red tape to discourage and show evidence of tampering and safflower was used to dye those bindings red. In the 18th century, safflower was used to enhance food as Italy, France and Britain used safflower dye to color cheese and flavor sausage.

What about the history of safflowers in the United States? A University of California research station report from 1901 is the first record of a safflower planting in the U.S. Fast forward to 1925 when safflower seed was obtained from Russia and India by the United States Department of Agriculture (USDA) for research and analysis. It was determined that safflower had potential as an oilseed crop, but at the time its oil content was deemed too low to be profitable. Research continued and more disease resistant varieties were developed with less hull and higher oil content. In the 1950’s, commercial production of safflower began in earnest to process safflower as an oil base for paints (it is still used in paints and varnishes today). As the 1960’s approached, the market demand for safflower was on the rise due to safflower’s growing popularity as an edible vegetable oil.

To recap, over the long course of safflower history, this plant has been used as a dye, in cosmetics, medicines, food and as a byproduct in paints – just to name a few. But – is safflower still relevant today? It sure is. Safflower is still used today and provides three main products: oil (for margarine and salad oils), meal for livestock and birdseed. It is grown in about 60 countries with world seed production reaching around 800,000 tons per year. India accounts for half of the world’s production followed by the United States.