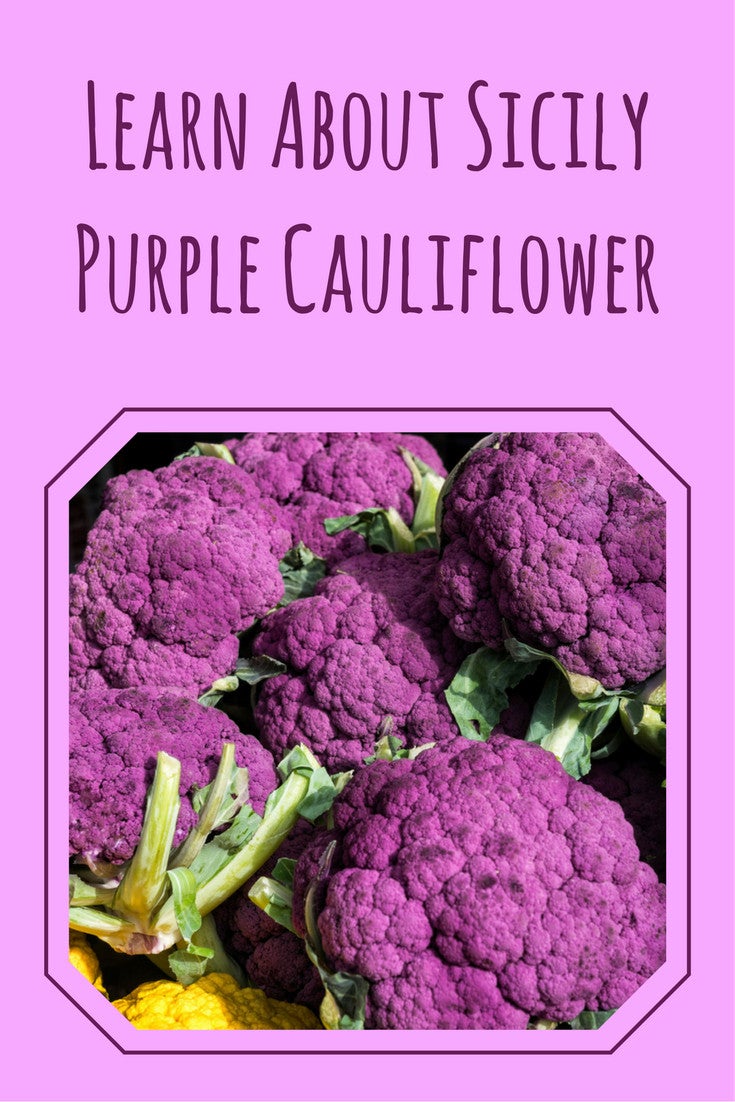 Having a hard time getting the kids to eat their veggies? Try introducing an heirloom vegetable. Why? Because many of them come in brilliant hues guaranteed to intrigue the pickiest tot. One such veggie is Sicily purple cauliflower, an eye popping purple heirloom cauliflower variety.

I don’t think this particular heirloom dates quite as far back, but cauliflower has a lengthy history and is first mentioned in the 6th century B.C. where Pliny describes early cauliflower, or cyma, as being far superior to other varieties of cabbage.

As a member of the Brassica family, cauliflower is related to broccoli and cabbage. Healthful additions to the diet, cauliflower is rather notorious for being finicky about its growing conditions. Well, maybe that’s stretching it a bit, but it does prefer cooler temps and for perfect white heads, blanching is involved, which requires a minimum of effort on your part.

The good news about Sicilian purple cauliflower is that it is said to be easier to grow but still vets you large 2- to 3-pound heads of mineral rich heads. The brilliant purple hue is due to the presence of anthocyanins, antioxidants that are also present in red cabbage and my favorite, red wine.

As mentioned, this heirloom is said to be one of the easiest to grow and, as a bonus, it is more insect resistant than other heirloom cauliflower varieties. It is generally grown as an annual, planted in the spring and takes 60-85 days until your reward of crunchy, sweet purpleness.

Start seeds inside about 6-10 weeks before the last frost for your area and then transplant when the seedlings have two sets of leaves. Space transplants 18-24 inches apart with 2-3 feet between rows. As with all cauliflower varieties, these babies need a little space.

Cauliflower, in general, likes quite a bit of water. Try for 1 to 1 ½ inch per week. Cauliflower is not only thirsty but a food hog as well. Before planting, amend the soil with 2-3 inches of organic compost. Once the seedlings begin to head, add another couple inches of compost into the soil every few weeks until harvest. Cauliflower also responds well to foliar feeding with compost tea during its growing season.

As summer wanes, it will be time to harvest. Just cut through the stalk under the head. Voila! If you want to retain all that antioxidant goodness, then I suggest you munch on your cauliflower raw. Cooking starts to leach the nutrient from the florets and the crunch of fresh cauliflower is lost as well. If you like your cauliflower cooked, however, keep in mind that it loses its appealing purple color as well as some of the nutrition.

Still, there isn’t anything quite as good (to me) as roasted cauliflower with a bit of salt, pepper, garlic, olive oil and fresh lemon finished with a dusting of asiago cheese. Oh, and a glass of red wine, purely for its antioxidant benefits, of course!