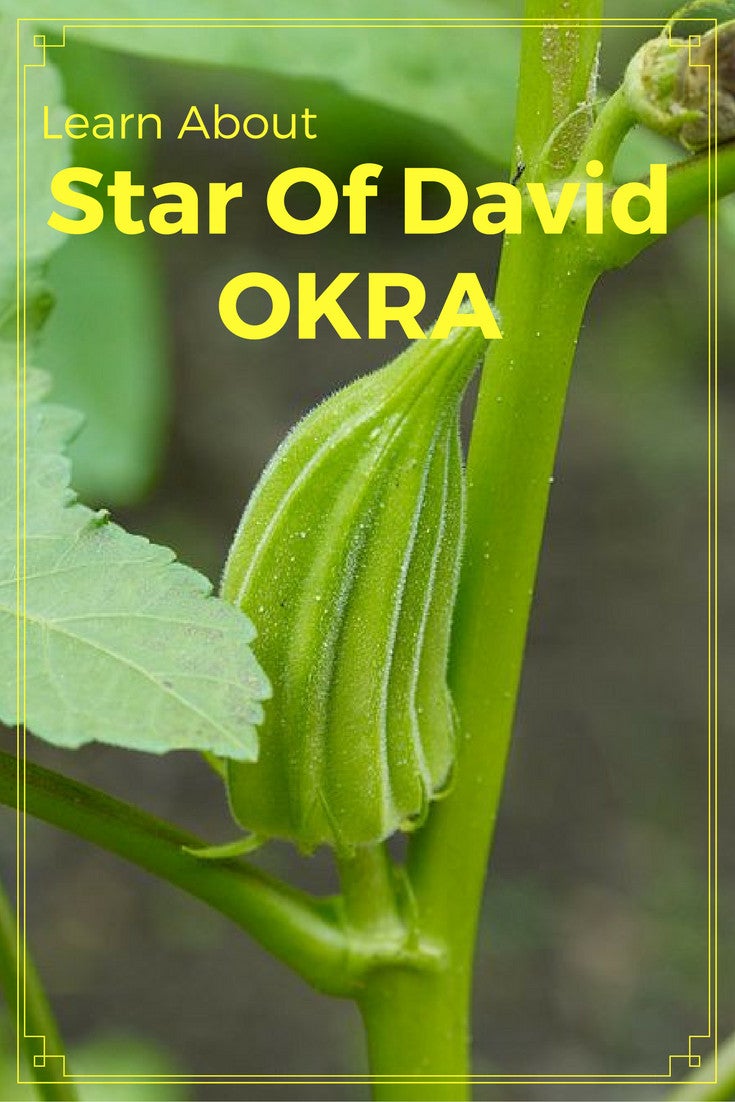 (Author of The Bulb-o-licious Garden)

Okay, so maybe it’s not a plant for everyone, but here in the South, there’s nothing like it. What pray tell am I referring to? Okra – specifically, the heirloom variety known as the Star of David. Hopefully, once you’ve learned more about the plant and its history, you’ll give it a try.

History of Star of David Okra

Okra (Abelmoschus esculentus) is grown as both an ornamental and edible in the garden. And why shouldn’t it be? This is a plant that has so much to offer. Most people are unaware that okra plants are related to both hibiscus and cotton. In fact, it produces large, stunning, mallow-like flowers. Earlier types even had thorny pods that were narrow and pointed, so much so that they could inflict injury. Fear not these plants though, as time has taken care of all that. Okra has been a part of native cuisine for thousands of years, and has a distinctive strong flavor. It’s commonly found in soup or stews, like Gumbo, and eaten fried or pickled in southern U.S. – oh yummy!

The plant itself likely came from northeast Africa, though its name comes from West Africa. Okra came to the United States in the 1660’s by way of slave trade. This particular variety, Star of David, is said to come from Israel. Well, now that makes sense as far as the name goes. It grows anywhere from 6-10 feet tall, averaging about 7-8, with attractive purple-colored leaves. Its name comes from the pods, which are around 5- to 9-inches long (though these are best harvested much smaller). When cut in half, the cross-sections of these pods resemble a geometric, six-pointed Star of David.

Okra plants love heat and humidity, which is most common here in the South. Start the seeds indoors 4-6 weeks before the last spring frost. It’s usually better to sow the seed in individual pots (I prefer peat pots so you can just plop them right into their planting hole), as they do not like their roots disturbed. Transplant them after the threat of frost has passed, spacing 12-18 inches apart with rows having 24- to 36-inch spacing. In milder climates like mine, you can also direct sow them ½ to 1 inch deep.

Give them lots of sun and well-draining soil. Heck, you can even grow them in the flowerbed alongside other ornamentals. Your okra should be ready to harvest 60-70 days after planting. Pick the pods while young and tender, about 3-4 inches long; otherwise, you will end up with touch, woody pods unfit for eating. And trust me, you don’t want that! So grow this interesting plant and add to soups or fry them up and devour promptly!