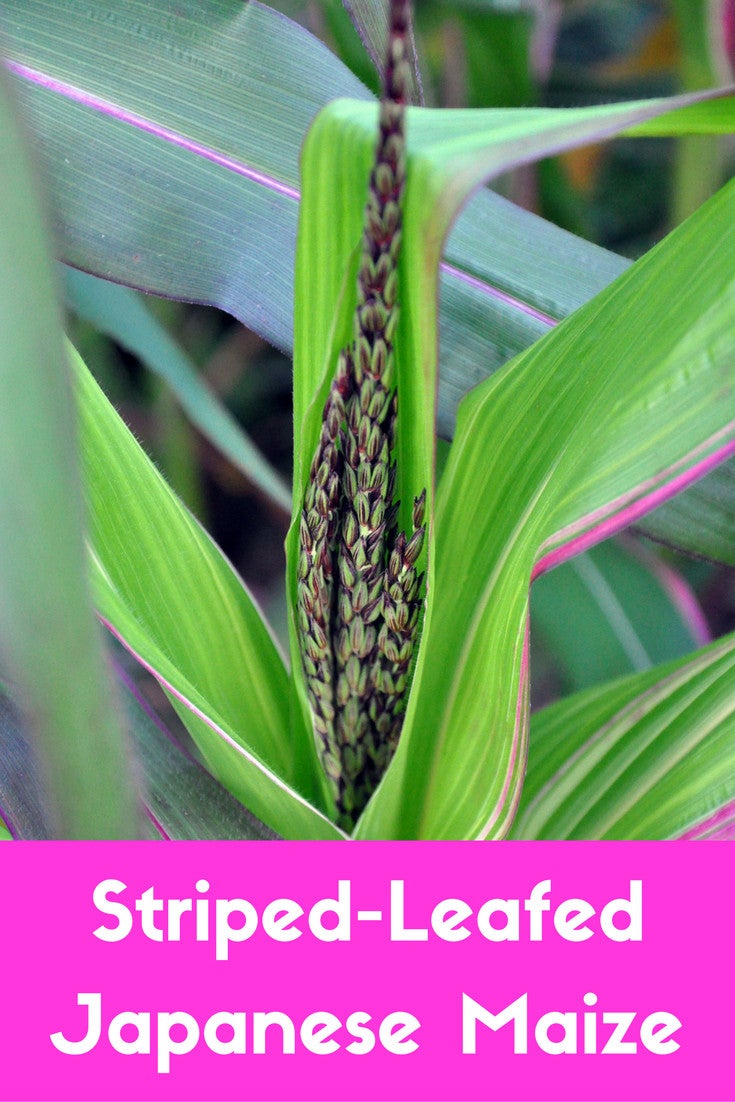 Often we are gardening towards a purpose, maybe for cheaper or organically grown food. Perhaps we garden to shade our homes or to shield ourselves from the prying eyes of the nosy neighbor. But sometimes, there is just no denying the nut in us and we just want to have fun. Boy do I have a plant for those times! Have a look at Striped-Leafed Japanese maize.

The heirloom corn that comes in a rainbow of colors offer gardeners more than just good flavor – you also get something attractive to plant and an interesting history. Speaking of which, it’s believed that corn’s origin began in the Mexican plateau or highlands of Guatemala, with maize being domesticated in the Tehuacan Valley of Mexico. Maize gets its name from a Spanish deviation for the word ‘plant.’ Maize, like other corn varieties, spread to the rest of the world through trading and exploration.

Japanese Striped maize (Zea mays ‘Japonica’) is an amazing, visually stunning ornamental corn plant hailing from, you guessed it, Japan. Introduced in the 1890’s, it might just as well have been called “Rainbow Striped maize” due to its multi-hued foliage and tassels. Japonica striped maize plant has variegated leaves striped with green, yellow, pink and white with dark purple tassels and burgundy kernels. Talk about eye popping!

What’s that you say? How do you grow the heirloom striped-leafed Japanese maize? This exquisite corn specimen is grown just as you would any other corn. Sow seeds outdoors at a depth of 1 inch after all danger of frost has passed in soil amended with compost and of a pH between 6.0 and 6.8. Choose a sunny location and set seeds in blocks of 3-6 rows, rather than one long row. This will increase the chances for pollination, and widely spaced plants tend to develop more intense colors. Thin the seedlings to a foot apart.

A small side note. Corn varieties easily cross pollinate, so separate them by at least 100 feet. Otherwise, who knows what you will end up growing! Of course, that in itself could be interesting too.

Remember, corn in general is a heavy feeder. Companion plantings ofÂ beans can encourage growth.Â Squash suppresses weeds, andÂ peas planted along with corn add nitrogen to the soil. In fact, the combination of corn, squash andÂ beans is one of the first companion plantings practiced by Native American people and is referred to as the “Three Sisters Garden,” because these three plants should never be parted.

In about 85 days, you will be enjoying the brilliant, colorful foliage (5-6 feet tall), but not only you. The neat thing about this annual is that the critters love it too. Ok, maybe they aren’t admiring its coloration, but the small burgundy ears are definitely tasty treats for all kinds of birds. See, you ended up planting Japanese striped maize for a reason. Not so crazy after all.