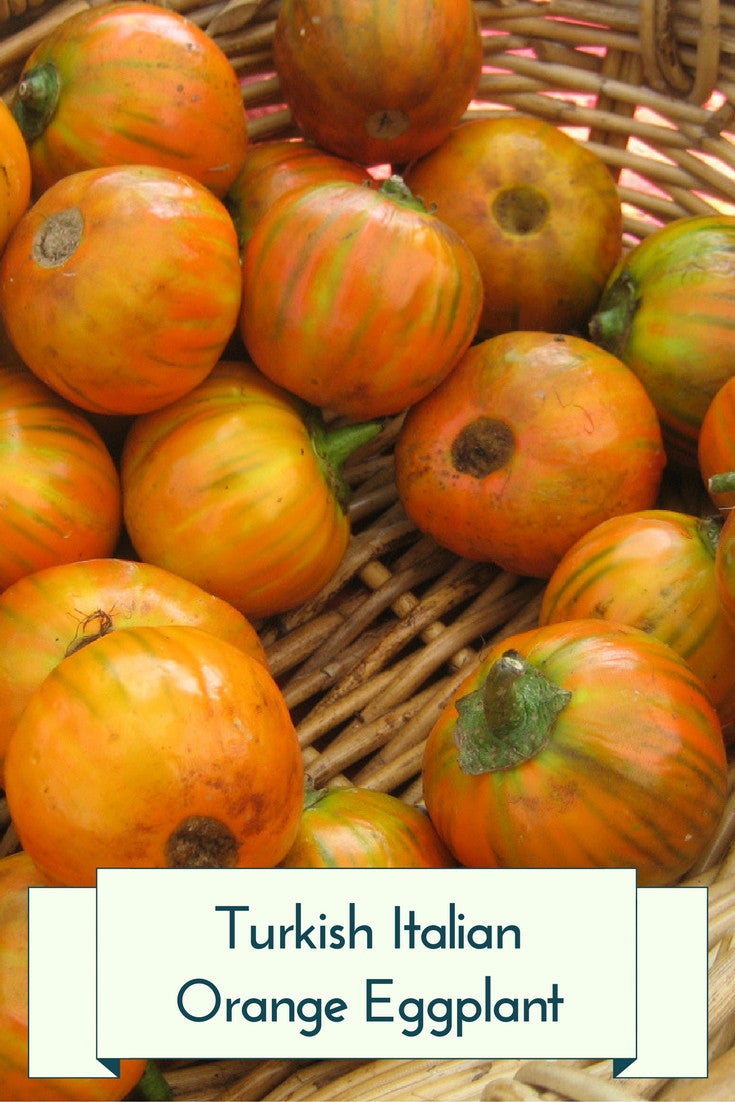 There is something very exotic, and yet adorably cute, about Turkish Orange eggplants (Solanum integrifolium). The chubby little fruits are also confusingly referred to as Turkish Italian because of their popularity in Italy but originated in Turkey. The bright orange orbs are rather seedy but have a sweeter taste than many other eggplants if eaten before they are completely ripe.

Unraveling the history of Turkish Italian Orange eggplants takes some serious sleuthing. They are also mistakenly called Scarlet or Ethiopian eggplant (Solanum aethiopicum), which appear to hail from Africa as opposed to its counterpart, the purple variety, which comes from Asia, or possibly India. Seeds were brought to other regions by way of trade, and from slaves trying to preserve their preferred food sources.

Eggplants (Solanum melongena) had a bad reputation among Europeans who called it bad apple, mala insane or apple of madness. That being said, it was grown for its ornamental qualities in the garden long before it became accepted as an edible. Though the eggplant in that time may not have resembled the lovely purple ones we commonly see today, they were said to look similar to goose eggs, both in shape and in color. Hmm, perhaps that’s how the plant derived its name.

While eggplant is a fruit, it’s not related to apples, as it was often referred and this particular variety actually resembles a mini pumpkin to me. It is in the nightshade family and the Turkish Italian is more closely related to wild eggplant than the purple varieties. Turkish orange eggplants are the size of a small tomato, and are indeed related to these common nightshade plants.

Full sun and hot conditions are requirements for growing Turkish Italian eggplants. Sow seeds Â¼ inch deep in fertile prepared soil. The seeds will germinate in 10 to 14 days. Some plants may require staking, but usually the Turkish eggplant forms a sturdy little bush. Fertilize much as you would tomatoes. In cooler climes with shorter growing seasons, start plants indoors 6 to 8 weeks before the date of the last frost. To speed up ripening, use red plastic mulch around the base of the plant. It keeps the soil nice and hot, prevents weeds and reflects heat up to the plant. When ready to harvest in about 75 days, the orange fruit becomes striped with green.

It is one thing to succeed in growing Turkish Italian Orange eggplants, but a completely other thing to cook them. You can eat the flesh raw, sliced or marinated in a salad or as a side dish. Most cooks prefer cooking them, as the fruit tends to be bitter and cooking removes some of that. Eggplant takes to almost any spice from Indian to Asian, Mediterranean and Ethiopian on to almost any indigenous cuisine you can think of. Broil, bread, deep fry, bake, sauté, steam your way through international recipes. These are versatile fruits, which will not disappoint you in the kitchen.