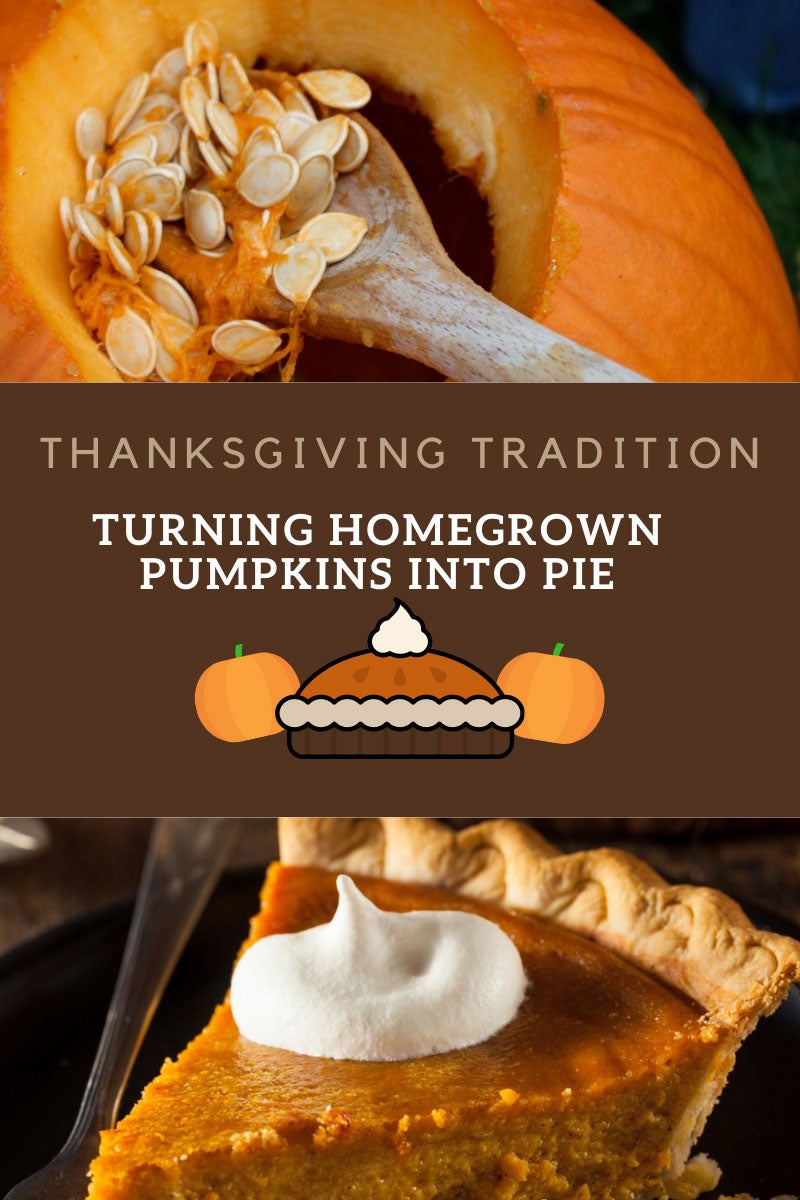 My mother loved to cook and holidays were her shining glory. Until a few years before her death, she continued to put on a Thanksgiving feast that paralleled none. My sister and I have both tried our hands at making her secret holiday recipes, but it’s not the same. So we opted for a new tradition. Thanksgiving buffets were our favorite. The ease of eating out, without the work. With Covid, this has changed.

The tradition of cooking Thanksgiving dinner now falls upon my generation. As I gear up for this new responsibility, my garden will play an important role.

Homegrown potatoes, sweet potatoes and whatever veggie did amazingly well will be my star side dishes. But there is one Thanksgiving tradition that’s been my shining glory for decades. The one thing I would bring to my mother’s amazing holiday dinner was homemade pumpkin pie from homegrown pumpkins.

This traditional Thanksgiving dessert is easy to make. Using homegrown pumpkins eliminates that tinny aftertaste, which is sometimes associated with food canned in metal. So my contribution was dessert. And for me, making Thanksgiving pumpkin pie starts in early summer.

I begin my piemaking venture by direct seeding pumpkins in small hills in the garden once all threat of frost has passed, the soil has warmed and squash bugs have settled in elsewhere. I keep my pumpkin seeds and seedlings well watered until they are established. Then I water deeply at the base of the plants, but only during dry spells.

Once the young pumpkin vines begin to venture off the mound of dirt, I spread grass clippings in an ever-expanding circle. I’ve found a deep bed of dried grass not only chokes out the weeds, but also keeps the pumpkins clean and dry. Outside of these tasks, I find pumpkins require very little work.

To be honest, I’ve never grown dedicated pie pumpkins. These spreading cucurbits tend to take up a major amount of real estate in the garden. Instead, I’d plant carving or Jack-o-lantern type pumpkins. They’d produce plenty of pumpkins for the kids to carve and I use the odd shaped or marred ones for pie.

Can you use carving pumpkins for pie? The answer is yes, but… carving pumpkins have thinner, lighter colored flesh. They tend to be less sweet and not as creamy. But most of all, they’re stringy. It only took one failed attempt at pie making to figure out how to work around these issues. Here’s my secret:

And that’s it! From there you simply prepare the pie following your recipe (You didn’t really think I’d give you mine, did you? LOL).