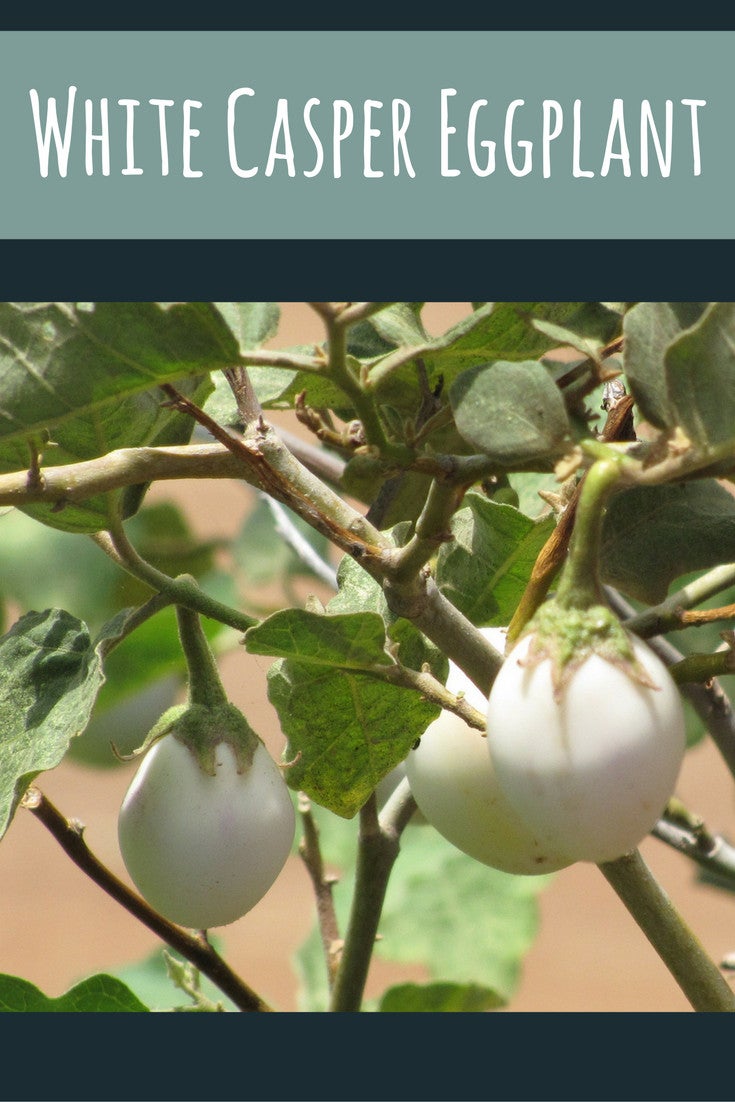 You probably haven’t seen, let alone heard of, such a cute little ghostly fruit as the Casper eggplant heirloom variety. But I’m, hopefully, gonna change all that. Its pale white complexion and mild, almost mushroom, flavor, makes this eggplant a standout in hearty stews, not to mention and it takes complex and exotic seasonings especially well.

Eggplants (Solanum melongena) were originally cultivated in China but probably originated in India. Over time, the chubby to oblong fruits became an important part of many other cultural cuisines. They are members of the nightshade family and once considered dangerous to eat by Europeans, driving one mad or even having deadly consequences – uh, please say it ain’t so. No worries. They are no longer thought to cause insanity, or death. In fact, this versatile fruit has come into its own, with numerous varieties, shapes and colors to liven up the table.

The Casper eggplant heirloom variety originated in France. Once consumption of the fruit became widespread, new varieties were being bred to offer thinner skins, different textures, flavors and shapes (of which most eggplants are classified – they look similar to eggs). The Casper eggplant has a pleasant teardrop shape, which if harvested young, does not need peeling.

French cuisine is rife with white food and obsessed with young tender vegetables. They are masters of the practice of growing vegetables in completely dark conditions and harvesting when barely ripe. This causes them to come out blanched, like white asparagus or endive, but have a tender, sweet flavor. White Caspers do not need to be subjected to this practice and will produce pure ivory colored fruit even in full sun. And they’re friendly too, wink-wink.

Eggplants are native to warm regions and need consistent warmth to set fruit. In most regions, the plants will need to be started indoors 7 to 8 weeks before the last frost. Sow seeds in 2-inch pots, ¼ inch deep in good seed starter mix. Keep them evenly moist in a sunny location protected from harsh rays.

Harden off the plants before installing them in a sunny location of the garden. Keep young plants under cut off 2-liter soda bottles to protect them from early beetles and larvae. Once they begin to fruit, the plants will need a little bit of extra water, but allow the soil surface to dry to the touch in between irrigation. Pick fruit 70 days after sowing seed, when they are about 5 to 6 inches long.

Try growing Casper eggplant variety alongside some of the other fascinating and tasty heirloom eggplants such as Rosa Blanca and Turkish Italian Orange. The history of white Casper eggplant and its sister varieties must live on in our modern gardens and cuisine.