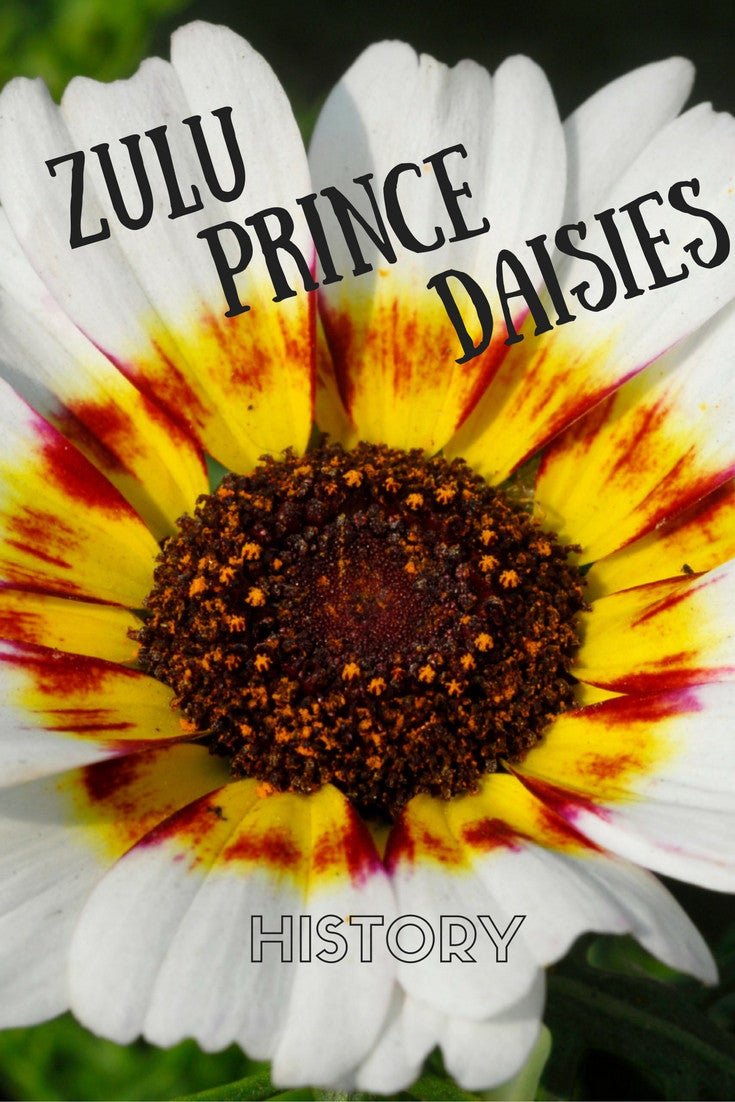 Nothing can be finer than an easy-care plant in the garden and, boys and girls, do I have one for you. It’s not only easy to grow, but the Zulu Prince daisy is easy on the eyes. A definite gem of an heirloom and a must have in the garden. Oh, and by the way, bees and butterflies like Zulu Prince, too!

Zulu Prince African daisy, (Venidium fastuosum var. Alba) is a real showstopper with flashy 3-inch blooms consisting of white, daisy-like petals and inner rings of vivid yellow and purple surrounding a satiny black eye. This heirloom species is a bushy, long-stemmed plant that reaches heights of about 2 feet. Zulu Prince blooms throughout summer and autumn, but the flowers usually close in late afternoons, or on dark, cloudy days. The velvety, silver-gray foliage is almost – but not quite – as stunning as the blooms.

Not much is known about the history of Zulu Prince daisies per say, though the name certainly must have come about by the regal appearance of these plants – at least that’s my take on it. However, we know that African daisies, which include Zulu Prince and many other cultivars (some in genus Arctotis, and Osteospermum), originated in dry, rocky areas of southern Africa. Zulu Prince is also appropriately known as Monarch of the Veldt or Cape daisy.

Zulu Prince daisy plants are easy to grow and the payoff is huge. Basically, all you need is a dry garden spot with no shortage of sunshine; daisies like heat and they don’t tolerate wet soil or humidity. So take a look at those problem dry spots in the landscape and put them to good use.

If you like the idea of planting seeds, you can easily start the plants indoors six to eight weeks before the last expected freeze in your climate. Then you can plant the seedlings outdoors when the weather warms in spring and you’ll soon have an abundance of blooms that last through summer and on into autumn.

Pinch the tops of the seedlings at least once to produce compact, bushy growth, and remember to deadhead wilted blooms so the plant doesn’t go to seed and stop blooming too early. Heck, you can even pick the long-stemmed blooms for flower arrangements as often as you like so you can enjoy them indoors.

Saving seeds is easy, too, and you will surely want more of these stunning plants. Keep an eye on the plant when the blooms die down in late summer. When you see the plump seedheads, clip one or two and drop them into a paper sack. Shake the sack every day until the seeds that fall out of the heads are completely dry and brittle, then store them in an envelope until spring.

Propagating Zulu Prince African daisies can be even easier if you have an established plant. Just dig up a section in spring and move it to a new location. As long as each new section has several shoots and four or five healthy roots, the plant should take root and grow like a champ.