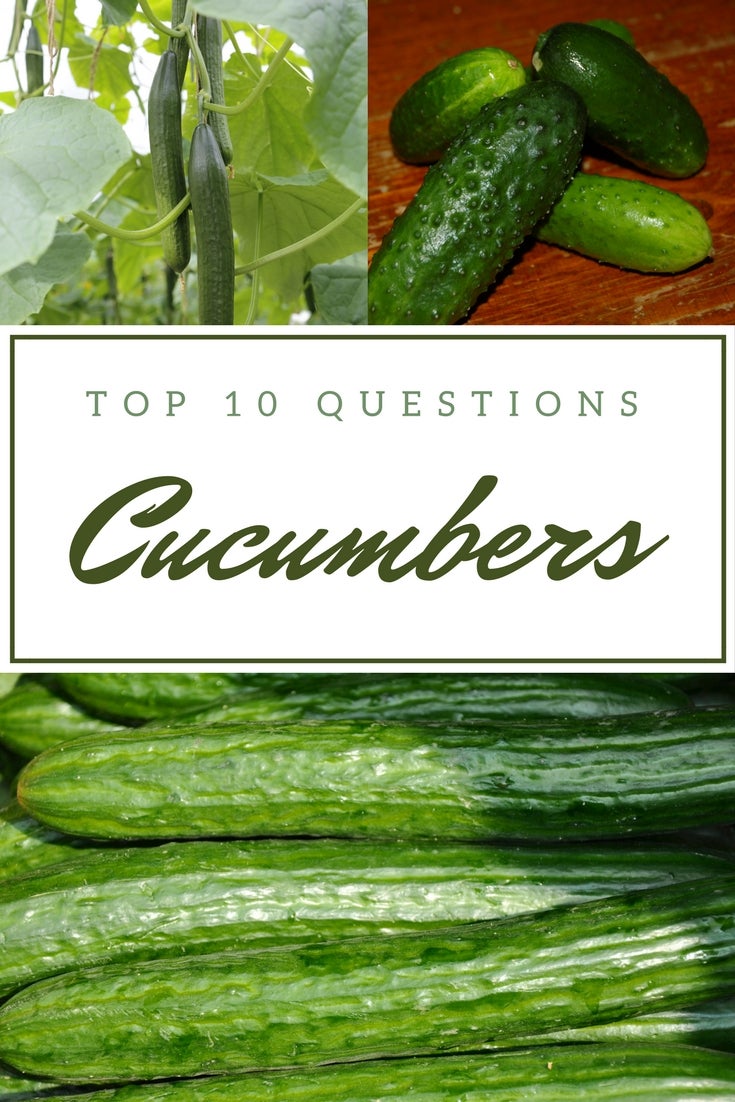 Here at Gardening Know How we get lots of questions, and our goal is to provide answers to those inquiries to the best of our knowledge. Cucumbers are one of the most commonly planted crops, with lots of questions to boot. To make it easier to find the answers you need, we’ve collected here the 10 most commonly asked questions about cucumber plants in the garden.

1. I have lots of flowers on plants but no cucumbers. Why?

Flowers with no fruit likely indicates a pollination problem. Cucumber plants, like squash and pumpkins, produce male and female flowers. These are typically pollinated by bees to produce the fruit. If there are too few bees, you can hand pollinate cucumber plants. Use a small paint brush or a Q-tip. Touch it to the male flower and then the female to transfer pollen. The female flower can be identified by the presence of what looks like a small fruit under the flower.

2. Why do cucumbers start growing and then fall off the plant?

If a cucumber grows but is small, malformed and drops off, the culprit is probably poor pollination. It takes several trips by a bee to properly pollinate, so if pollinator activity is low, it may not be enough to fully pollinate the cucumber plants. You can hand pollinate by transferring pollen using a small paint brush or Q-tip from the male to female flowers. The female flowers have tiny fruit under the blooms.

3. How to tell when to harvest cucumbers?

In general, most cucumbers are ready for harvest in 50 to 70 days. As cucumbers are developing, you can pick them at whatever size you like. Just keep in mind that if you wait for them to grow too big, they may be less flavorful. Ripe cucumbers have a firm, green flesh. Harvesting of cucumbers also depends on the type you are growing and how they’ll be used – slicing or pickling, etc. Slicing cucumbers are best harvested at 6 inches (15 cm.) and pickling types much smaller, around 3-4 inches (8-10 cm.). During the peak of the season, you’ll be harvesting ripe cucumbers every day or two, so check them often.

4. What is the best way to grow cucumbers?

Cucumbers grow best in humid, warm weather. If you live in a colder climate, start them indoors and transplant outside after the possibility of frost is gone. Choose a sunny spot in the garden and provide your plants with loose, organic soil that drains well. Adding compost is a good way to enrich soil for cucumbers. Give your cucumbers plenty of space, as they trail and cover a lot of ground. If you choose, you can train them to grow up something, like a trellis or fence.

5. How to treat beetles on cucumber vines?

These insects are carriers of cucumber bacterial wilt and cucumber mosaic, making their control vital in the garden. You can manage cucumber beetles on your plants by spraying an insecticide. Sevin is a popular choice, but you can also use neem oil, which is often labeled as fruit tree oil in stores. You can also deter them from the onset by using row covers early in the season. Encouraging beneficial insects to the area will help eliminate the need for insecticides, as many of them are natural predators of cucumber beetles.

6. Why are my cucumbers bitter tasting?

Cucumber plants contain bitter-tasting compounds called cucurbitacins. They typically stay in the leaves and stems, but may end up in the fruits leading to bitter cucumbers. There are a few reasons this may happen: The plant suffered from heat stress, it was stressed by drought alternated with overwatering, the temperature fluctuated too much, or it may just be that the plant is genetically disposed to having bitter cucurbitacins in the fruits. Picking the fruit too late can also result in cucumbers that taste bitter.

Yellow cucumbers are usually overripe and no longer good to eat. They will be bitter. It is also possible that a cucumber has turned yellow because of a viral infection, overwatering, or imbalances in nutrients. There are also varieties of cucumber that are supposed to be yellow, like the lemon cucumber.

8. What is the white stuff on my cucumber plant leaves?

A white or grayish powder on cucumber leaves is likely the result of powdery mildew, a fungal infection. It thrives in warm, damp, and humid environments, so you can prevent powdery mildew by spacing your plants out and giving them plenty of room to grow with good air flow. If you already have the infection, trim off and dispose of infected leaves. Do not put them in the compost. Use a solution of nine parts water to one part hydrogen peroxide to spray the remaining leaves about once a week. Neem oil can also help.

9. Can you prune the vines on a cucumber plant?

Pruning a cucumber plant is generally not recommended, as doing so can make them more vulnerable to diseases. That being said, you can prune them as needed and on a limited basis to help maintain the balance between vine growth and fruit production. Simply trim outside branches, leaves, flowers and fruit as needed throughout the growing season. Also, if you do prune, use sharp shears and make clean cuts.

10. Why are my cucumber plants wilting?

Cucumber wilt is caused by a bacterial infection that is spread by the striped cucumber beetle. If you see these small insects on your plants, this is likely the cause of the wilt. As the plants begin to wilt because of the infection, they become even more susceptible to eating by the beetles, so that infestation gets worse as well. Use an insecticide to control the beetles, but if a plant is fully wilted already, it cannot be saved. Destroy the plant and take steps to control the beetle infestation before planting more cucumbers.

We all have questions now and then, whether long-time gardeners or those just starting out. So if you have a gardening question, get a gardening answer. We’re always here to help.

Tell us what you think: Leave a comment
Printer Friendly Version
Read more about Top 10 Plant Q&A
<PreviousNext>
Did you find this helpful? Share it with your friends!
FacebookTweetPinEmail