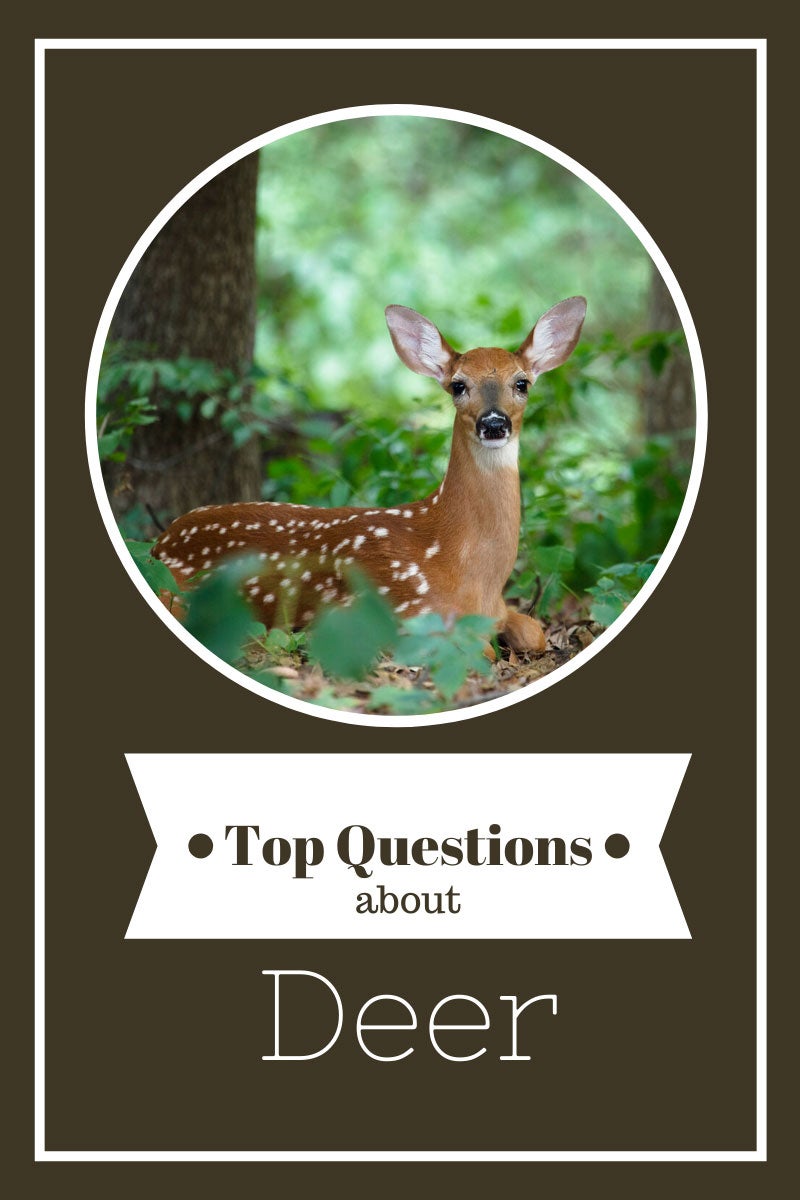 It can be disheartening to have your hard work in the garden go caput due to unforeseen challenges. That’s why it is the goal of Gardening Know How to help avoid these issues, or at the very least amend them, by providing the best information possible so your garden will flourish – and that includes answering the gardening questions that plague us all. Here are the top questions about deer in the garden.

1) Is it safe to use deer manure in the garden?

It may be tempting to use deer manure as fertilizer, and if you live in deer country, there’s plenty of it. However, deer manure may carry E. coli, and although it’s rare, there’s a possibility the manure may contain a disease known as CWD (Chronic Wasting Disease). Deer manure is only safe to use if it’s properly composted. This means compost much reach an internal temperature of 130 to 140 F. (54-60 C.) for two separate heat cycles of at least five days each. The compost shouldn’t be applied to your garden for at least two to four months after the final heat cycle.

2) How to repair bark damage caused by deer?

If the bark damage from deer is minor, wash the area with soap and water to remove disease pathogens. Clean the edges of the damaged area so the bark is smooth and snug against the wood and insects can’t burrow under, then let it air dry. Don’t remove more bark than necessary, and don’t expose living bark to the elements. If the tree is healthy, it can withstand damage to about 25 percent of its bark. More extensive damage, or if the tree is girdled (when the bark has been scraped or damaged all the way around the trunk), may require professional intervention.

3) Is there a homemade repellent for deer eating plants?

The most effective homemade deer repellents generally have hot and/or smelly ingredients. For instance, deer may turn up their noses at a rotten egg spray consisting of eggs, garlic, water, yogurt, and cayenne pepper. Mix the ingredients, and then leave them outside for a few days to ferment. Pepper sprays with jalapeno or habanero peppers can also be effective. Blend the peppers with water until they’re liquid, then add vegetable oil and yogurt. Homemade deer repellents can be filtered through cheesecloth so they won’t clog your sprayer.

4) How do you get rid of deer in the garden?

Deer are determined when they’re hungry. The only surefire way to keep deer out of your garden is to install a fence no shorter than 8 feet (2.5 m.). Deer repellents may be effective, but you’ll need to switch repellents if they stop working. Similarly, flashing lights or loud noises may discourage deer for the short term. A dog will help, but only if the dog is kept outside when deer are active. (The odor of a dog won’t deter them) Many people find that motion-activated sprinklers are effective, but you may need more than one if your garden is large.

5)  What are some deer safe plants and flowers?

Deer will eat almost anything if they’re hungry. Resistance varies from year to year, and herds may have their own preferences. However, there are certain plants that aren’t at the top of their list. Deer tend not to like plants with strong aromas such as bearded iris, sage, lavender, and peonies. They usually avoid plants with prickly, rough or fuzzy leaves, such as Oregon grape, holly, zinnia, lamb’s ear, juniper, or yarrow. Not surprisingly, they won’t eat poisonous plants like poppies, foxgloves, and bleeding hearts. Deer love tulips, but they avoid most bulbs, including hyacinth, daffodils, and allium.

6) What plants are resistant to antelope?

Finding antelope-resistant plants is challenging because they tend to eat anything that is healthy and green. For the most part, however, they generally dislike the same plants that deer avoid, including those that are thorny, spiny, or prickly; and those with a strong odor. Potential antelope resistant plants may include honeysuckle, Russian olive, juniper, abelia, forsythia, Oregon grape, lavender, mint, salvia, barberry, holly, zinnias, lamb’s ears, allium, or French marigolds. They instinctively avoid plants that are toxic, such as bleeding heart, daffodils, oriental poppies, or foxglove. Antelope tend to pass by nearly any ornamental grasses.

7) What to do about deer eating tree leaves?

Preventing deer from eating tree leaves is nearly impossible unless you can construct a fence measuring at least 8 feet (2.5 m.) in height. However, motion-activated sprinklers that blast deer with a harmless but powerful burst of water work quite well. You can also try commercial or homemade deer repellents, or strong-smelling substances like garlic, urine, human hair, or strong-smelling soap. Don’t use mothballs, which contain toxins that leach into the soil and groundwater. Some people recommend decaying fish heads, but this is ill advised if you have a dog, as the bones can get lodged in the dog’s throat.

8) How do you keep deer from eating vegetables?

A tall fence is in order if you are determined to keep deer from eating your vegetables. You can also install black mesh deer netting attached to metal garden stakes or wooden posts. Any fencing must be a minimum of 8 feet tall (2.5 m.) or even taller. A motion-activated sprinkler is a relatively expensive way to discourage deer if your garden isn’t too large. An electric fence is an alternative if you don’t have children or pets. Deer repellents may work if you’re persistent, but you may need to switch repellents from time to time as the deer become accustomed to them.

9) How do you protect trees from deer?

Deer love to scrape and rub their antlers against tree bark, and they can do considerable damage. The only way to protect trees is to create a barrier that keeps deer out of reach. For instance, wrap trees loosely with chicken wire, or install a mesh or plastic deer guard. Burlap generally discourages deer from small trees and shrubs and will also offer protection from sun scald during the winter. Fences and other barriers are more likely to be effective if they’re at least 6 feet tall (2 m.).

10) How to use fencing to keep out deer?

A sturdy fence at least 8 feet high (2.5 m.) is the only surefire way to keep deer out of your garden. If you don’t want a tall fence, you could install two 4- to 5-foot fences (1 m.) about 5 feet apart (1 m.) Deer can jump high, but they’re not good at jumping high and wide. Another variation is to install a shorter, slanted fence, maybe 6 feet (2 m.) high with a 45-degree slant. Solid fences that deer can’t see through are most effective. Black mesh fencing is inexpensive but may not be sturdy enough for a large deer population.

We all have questions now and then, whether long-time gardeners or those just starting out. So if you have a gardening question, get a gardening answer. We’re always here to help.

Tell us what you think: Leave a comment
1 person is already talking about this.
Printer Friendly Version
Read more about Top 10 Plant Q&A
<PreviousNext>
Did you find this helpful? Share it with your friends!
FacebookTweetPinEmail