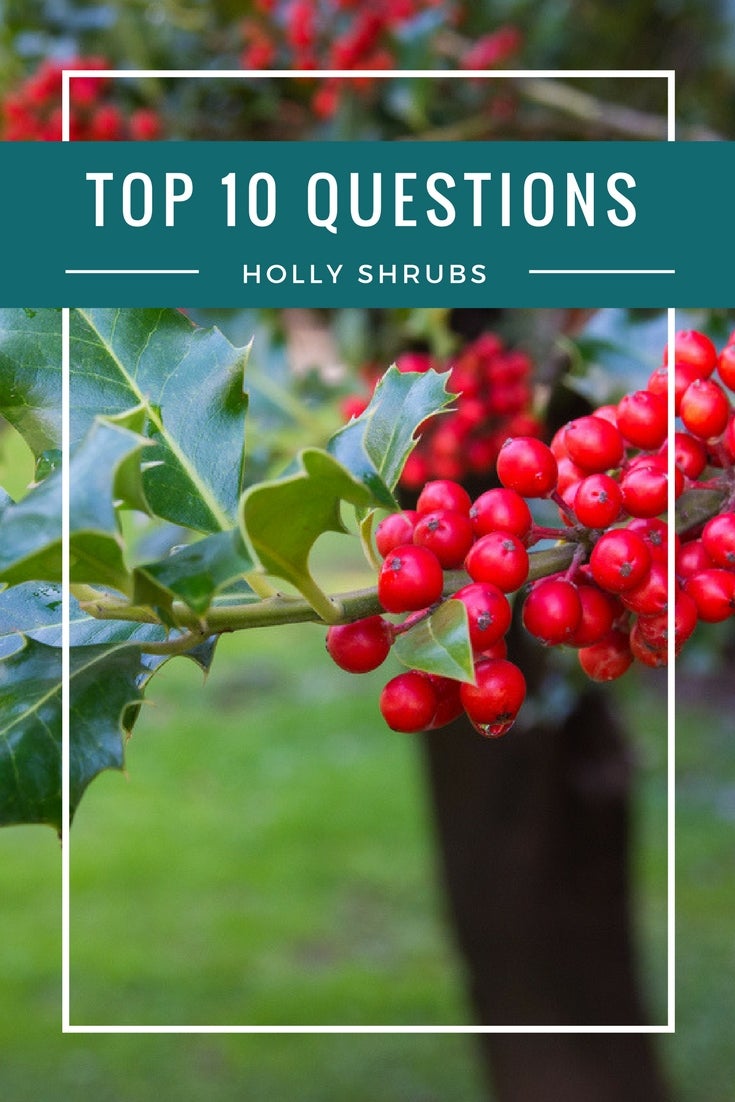 Gardening Know How receives a lot of questions growing and caring for plants in the garden. Holly shrubs are common additions to the landscape and not without their share of problems. This article container information on the 10 most asked questions about holly bushes and answers to go with them.

1. When should you prune holly shrubs?

The best time to prune holly bushes is in the winter, when they’re dormant. If you’re doing this, it’s acceptable to cut back up to one third of the plant’s growth. It’s not absolutely necessary to do this in the winter, though. You can do some minimal pruning to shape the bush at any time of year – just be aware that pruning in late summer might result in fewer berries in the autumn. Some varieties, like Yaupon and Chinese holly, don’t need to be pruned at all.

2. How to get berries on my hollies?

3. How to tell the difference between male and female holly bushes?

The easiest way to distinguish male and female holly bushes is to look for berries. If a bush has berries on it, then it’s female. Unfortunately, not all bushes without berries are male – they may be female bushes that are unpollinated or just out of season. The next best way to distinguish is by the flowers – male flowers have more prominent stamens than their female counterparts. Another good rule of thumb is to check for cultivar names. Many cultivars have matching names for the two sexes, like “Blue Prince” and “Blue Princess.” Just watch out for “Golden Queen” and “Golden King” which, for some reason, are named for the opposite sexes!

4. Why are the leaves turning yellow on my holly?

Yellow leaves on a holly bush usually means an iron deficiency and is often referred to as iron chlorosis. It can be caused by a few things. One major factor is too much water, either due to overwatering or poor drainage. This can leach away the iron in the soil and suffocate the plant’s roots. Another cause can be high pH levels. If the soil is too alkaline, it prevents the plant’s roots from taking up enough iron. Occasionally, the problem is simply due to low iron levels in the soil, although this is not often the case.

5. How to treat the white spots on holly shrubs?

White spots on holly leaves can be due to a few different things. The culprit might be mealybugs, which leave a cottony residue on the undersides of leaves. Another possible issue is scale, tiny armored bugs that come in shades of brown to white and can be found in clusters on the undersides of leaves. If the white spots have more of a dusty, fungal look to them, your problem is probably powdery mildew. All of these problems can be treated effectively and safely with Neem oil.

6. How to fertilize holly plants?

There are a few good options for holly fertilizer. Rich compost and well-rotted manure are both good options. If you want to go the commercial route, choose a complete fertilizer with 8-10% nitrogen. Holly bushes like acidic soil. Some fertilizers are designed to help lower the pH of the soil as well as feed it – fertilizers specifically marketed for rhododendrons, azaleas, and camellias all fall into this category and work well. There are also fertilizers made for hollies, Holly-Tone is one such example. Feed your holly bush once in the spring and again in the fall.

7. Why is my holly shrub dropping leaves?

Your holly shrub might be dropping leaves for a few reasons. If it’s springtime, it may just be natural. Many hollies are evergreen, but they don’t keep the same leaves forever. It’s normal for some leaves to drop in the spring to make way for new growth. Another common reason is drought. Hollies like to be well watered. Try putting down several inches of mulch to keep the soil moist. The culprit might also be leaf scorch, which is caused by cold damage. Mulch heavily and water during warm spells in autumn to prevent this next winter.

8. How to treat holly leaf spots?

Also known as holly tar spot, this problem can be caused by several different fungi. It starts as dark spots on leaves and leads to leaf drop. If left unchecked, it can cause serious defoliation. The best way to prevent leaf spot is by keeping the bush pruned to encourage good air circulation. If you catch an infection early, you can apply fungicide to hopefully stop its progress. If defoliation has already started, there isn’t much you can do but wait. Fortunately, leaf spot won’t kill the plant. It will just make it ugly until new leaf growth comes in next season.

9. How to care for holly in the winter?

There’s a reason holly bushes are associated with Christmas – they’re at their prettiest in the winter time. For the most part, they are winter hardy, though they can benefit from some extra protection. In the fall, mulch heavily around the base and water generously on warm days to help keep the shrub moist through the winter. If your winter is exceptionally cold, or if your hollies are planted in an exposed spot that gets a lot of wind, you can wrap them in burlap to protect them from cold damage.

10. Can you grow a new holly from cuttings?

Holly can be propagated from cuttings. The time to do this is when the bush is dormant. For deciduous hollies, this is when it has no leaves. For evergreens, it’s in the coldest part of winter. Take a 6-inch (15 cm.) long cutting from the end of a stem of new growth. Dip the cut end in a rooting hormone. For deciduous bushes, wrap several cuttings together. Bury them at least six inches (15 cm.) deep in the ground, with the cut ends facing up. They should sprout in the spring. Sink the ends of evergreen cuttings 1 inch (2.5 cm.) deep in the ground and keep them well watered.

Tell us what you think: Leave a comment
Printer Friendly Version
Read more about Top 10 Plant Q&A
<PreviousNext>
Did you find this helpful? Share it with your friends!
FacebookTweetPinEmail