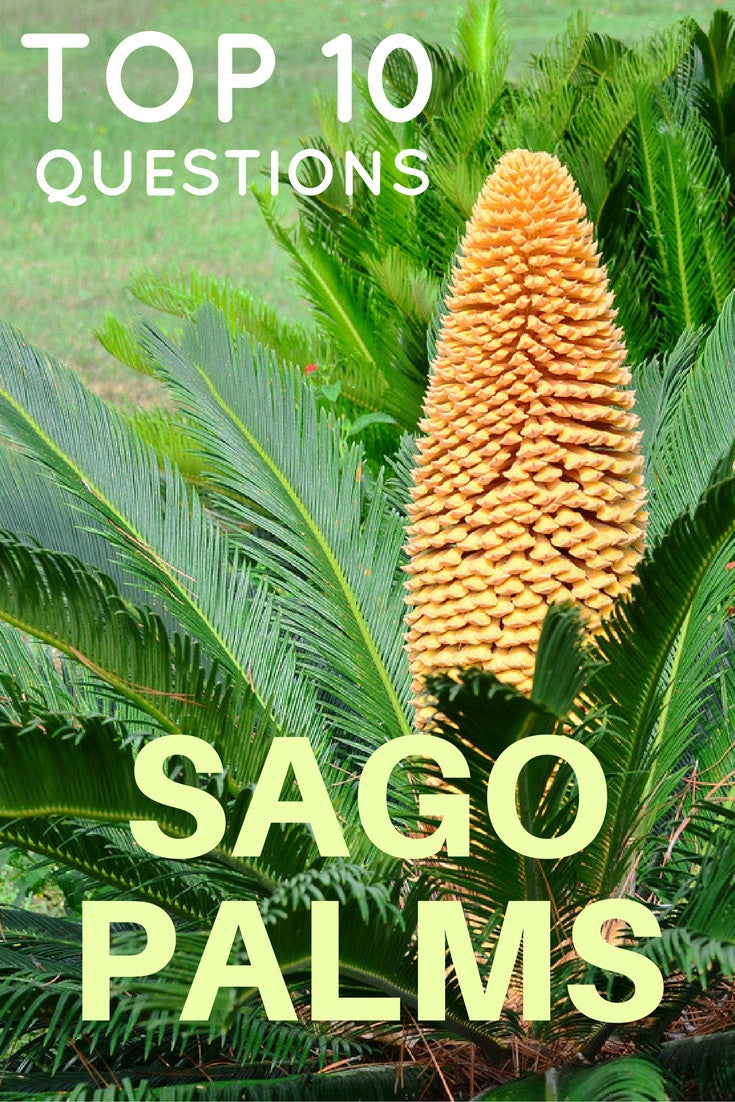 Here at Gardening Know How we understand you may have questions about your precious plants. After all, that’s one of the reasons why we do what we do. Keeping gardeners well informed on the how’s, when’s, why’s and more helps ensure a successful gardening experience. Sago palm plants are commonly grown both in the home and the landscape. While they’re usually trouble free, they do have their problems now and then. Here are the 10 most asked questions about growing sago palm trees.

1) How to care for an indoor sago palm – what type of soil is best?

Sago palms are popular houseplants because they require very little care. While they prefer a bright location, they can tolerate lower lighting. Near a bright window, but away from any direct drafts, is a good location for an indoor sago palm. The most important requirement sago palms have is properly draining soil, as wet feet can lead to rot and death of the plant. As for sago palm plant soil, they prefer a well-draining, slightly sandy growing medium. They should be watered deeply but then allowed to dry out between waterings. Indoor sago palms will also appreciate once a month feeding with a balanced houseplant fertilizer.

2) What to do with sago palm pups?

A mature sago palm may produce offsets, or pups. If left attached to the main trunk, these pups can take away valuable nutrients and water from the parent plant. To transplant sago palm pups, with a clean, sharp garden trowel, gently sever the pups from the parent plant. Brush off any soil on the pup and cut back its foliage. Allow the pup root to dry out for a week or two. Then plant only the bottom half of the sago palm pup rootball in a pot filled with a sandy soil mix, leaving the top half of the rootball above the soil line and exposed. Water the newly planted pups thoroughly. If you’d like, you can water it with a mix of water and a rooting fertilizer. Let the soil dry out between waterings but water deeply and thoroughly when you do water. Pups should remain in pots until they have established their own sufficient root system. Then they can be transplanted outdoors if desired.

3) Should you remove female sago flowers? and do you prune male sago palm cones?

Sagos produce both male and female plants. A female sago palm will sometimes produce flowers. These flowers may use up some of the plant’s available nutrients as they form, causing the plant’s overall growth to slow during bloom time. However, the flowers do not harm the plant. Removing the flowers can cause unintentional harm to the plant, so it is best to let them grow. Likewise, male sago palms may produce cone-like seed pods. These can be left to grow, but unlike females, the cones can be removed without harming the plant if desired. Wait to remove the cone until fully open, revealing the pollen inside. If you don’t plan to use your male cone for pollination, then it can be removed any time, even when first starting to grow. Hold the cone at the center and snap it off. You can also saw it off at the bottom.

Sago palms do not like to be cut back or pruned. Pruning should only be done when absolutely necessary. When pruning a sago palm, only dead, diseased or damaged fronds should be removed, though, the plant itself will usually shed these fronds on its own. A sago palm’s fronds store nutrients that the plant needs to grow, even sickly, yellowing fronds still provide the plant with nutrients. Cutting sago palm fronds off can slow the plant’s growth, or cause it to grow stunted or deformed. Pruning sago palms also leaves the plant vulnerable to pests and diseases. Only when absolutely necessary, cut sago palm fronds right back to the trunk, in late fall or early spring.

5) Can you transplant a sago palm?

Once established, a sago palm does not like to be moved. However, if you must transplant a sago palm, do this in late winter or early spring while the plant is in a semi-dormant phase. Prepare for transplanting the day before moving a sago by watering the plant deeply and pre-digging the hole in its new location. When digging up the sago palm to transplant it, be sure to dig up as much of the root system as possible to reduce transplant shock. Plant the sago palm in its new location, no deeper than it was planted in before. Water the newly planted sago thoroughly. Watering it with a rooting fertilizer can also help reduce shock as well. Repotting container grown plants should also be done in late winter or early spring.

6) Why is my sago plant turning yellow?

Sago palm fronds turning yellow can be a sign of a nutrient deficiency. Sago palms should be fertilized regularly, about once a month, with a houseplant fertilizer. Yellowing fronds can also be caused by insect infestation or poor drainage. If you have already been feeding your sago palm regularly but foliage is still turning yellow, inspect it carefully for insects and treat as needed, if you find any. Water the plant deeply when you water it but then allow the soil to dry out between waterings. Wet feet can lead to crown and root rot, which can lead to die back and yellowing of the foliage.

7) How to fertilize sago palms? And how often should sago palms be watered?

When fertilizing sagos, an all-purpose houseplant fertilizer used as the label directs and once a month is fine for indoor sago palm houseplants. Outdoor sago palms may grow best with a slow release fertilizer specifically made for palms. Although sago palms are not true palms, they have the same basic nutrient needs as true palm plants. Always use fertilizers as their labels say to use them, as too much of a good thing can be harmful.

When watering a sago palm, water it at the soil or root zone. Do not water the trunk, as this can cause rot and diseases. Water deeply and thoroughly, saturating the root zone. Then allow the soil to dry out before its next watering. Proper drainage is very important for sago palms and over watering is the most common cause of death or disease of sago palms. Yellowing fronds or browning foliage tips can be a sign of overwatering.

8) How to take care of a sago palm in cold weather?

Sago palms are hardy in zone 8 or higher. They cannot survive long-term frost or freezing, although they can withstand brief periods of temperatures as low as 15 degree F. (-9 C.), but are killed at 23 F. (-5 C.) or below. This means you need to provide sago palm winter protection. Even in zone 8, temperatures can occasionally dip too low for sago palms. In colder areas, it may be best to grow sago palms as potted plants that can be moved into a sheltered location if temperatures get too low. However, if you have sago palms planted outdoors give them about a 3-inch layer of mulch around their base through the winter months. Also, cover the whole plant with burlap or blankets if there is any danger of frost. Sago palms go through a semi-dormant phase in winter and will require less watering and feeding during these months.

9) Can you save a sago palm damaged by cold?

Unfortunately, these plants are easily damaged by cold. If you have a cold damaged plants, wait until spring to cut back the plant to help protect the new growth in case another freeze occurs. Remove only the yellow and brown fronds in the spring, as they will not come back. Do not remove green fronds. It is hard to say how well they will grow back. Sago palms do not deal well with lost fronds, but they have been known to recover fine. Generally, if the stems are alive, they have a good chance of recovering.

10) How to treat white spots on sago?

White spots on sago palm can be from fungal diseases or insect infestation, like scale or mealybugs. Either way, the best course of action to take if you see white spots on your sago palm is to start a neem oil regiment. Neem oil is a natural pesticide and fungicide. Be sure to spray all aerial surfaces of the plant, taking care to thoroughly get the undersides of the foliage or any nooks and crannies where pests or disease can hide. Re-apply after a week or two. Sometimes, fungal diseases or pest infestations can be caused by environmental factors like soggy, humid weather and will correct themselves naturally if the weather dries out. When watering sago palms, always water at the soil not the trunk or foliage.

Everyone has questions now and then, whether long-time gardeners or those just starting out. So if you have a gardening question, get a gardening answer. We’re always here to help.

Tell us what you think: Leave a comment
7 people are already talking about this.
Printer Friendly Version
Read more about Top 10 Plant Q&A
<PreviousNext>
Did you find this helpful? Share it with your friends!
FacebookTweetPinEmail