10 of the Deadliest Plants in Gardens 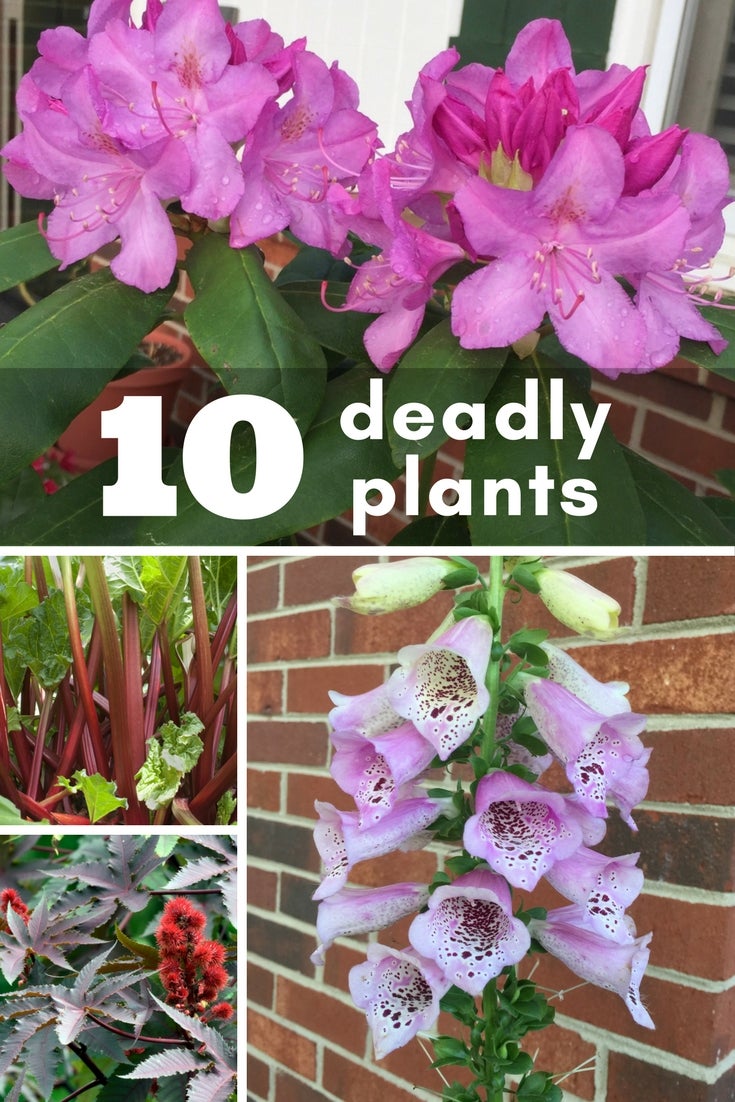 The most beautiful plants in the world can have deadly hidden attributes. Your garden may be a haven for you and your family, but it has its perils too. Knowing what these are can be the key to keeping that retreat a safe space. While roses have their thorns, the dangers we have in mind are toxins and poisons. Lurking in your garden oasis may be some of the most common landscape plants that have the ability to sicken or even kill. Here are 10 of them:

1. Foxglove – The delightful pink, white or purple hanging bells of foxglove should chime a warning. Foxglove contains a compound that causes irregular heartbeat, nausea, vomiting, unclear thinking and, in large doses, can cause death. Digitalis poisoning was a popular method of murder in medieval times. Some speculate that Edward IV was a victim. In spite of its rather sinister past, the plant easy to grow and a beautiful spring and early summer bloomer.

2. Cherry – There are many species of cherry and all of them are toxic. While the fruit of cherry trees is popular and quite edible, the seeds, or pits, have cyanide, as do the leaves. If ingested, the expected results are staggering and convulsions quickly, with death upon the hour.

3. Hemlock – All parts of hemlock are poisonous and the stuff grows everywhere. Usually, animals are infected through their browsing activities, but it is also deadly to humans and accidental ingestion is a concern especially where children are concerned. The plant has carrot-like foliage and a hollow celery-like stem with large white umbels. Stay away from this plant at all costs.

4. Yew – Oh, toxic Taxus. Entire herds of cattle have been laid low by this attractive shrub. Yews feature prominently in many landscapes, especially in tidy sheared hedges. However, the foliage and berries can cause sudden death with few warning symptoms. If symptoms do occur, they include trembling, staggering, weak pulse, and very quickly the patient collapses. The leaves are more poisonous than the fruit, but it is the bright red berries that attract children and animals. The flesh of the berries is not poisonous but the seed within is deadly. It takes very little to provide a fatal dose.

5. Daphne – Daphne is a small, ornamental plant that is in the Spurge family. All parts of the plant are poisonous, but the berries are especially deadly. It takes only one berry to kill a child. The plant also produces a sap that can cause topical irritation, especially in those that are allergic to latex.

6. Rhododendron – Rhododendron and their azalea cousins are poisonous if a large amount is ingested. While this is unlikely, a pet who has taken a liking to the shrub can become ill and die. These native North American plants are responsible for a 1st century BC mass poisoning. Roman troops suffered huge casualties from eating honey that had been made from rhododendron nectar. The symptoms are drooling, confusion, low blood pressure and irregular heartbeat. If a child eats a flower, symptoms are generally mild, but it is best to call the Poison Control Center immediately to get guidance.

7. Lily of the Valley – This wild woodland flower bulb is delicate and dainty and doesn’t look like it could harm a fly. However, ingestion of lily-of-the-valley plant can cause headache, hallucination, and exaggerated slowing of the heart which can lead to death. No matter how cute the plant is, don’t be tempted to try it.

8. Rhubarb – The crunchy, sour stalks of rhubarb make excellent pies, sauces and preserves, but it’s the leaves on this plant you have to watch out for. Rhubarb leaves look like they would be good to eat, with some resemblance to other edible greens. However, large amounts of the leaves can have harrowing results. This is nothing to mess around with! Stick to the stems and compost the leaves.

9. Larkspur – The beautiful delphinium, or larkspur, is an elegant landscape plant with a deadly side. The young leaves and seeds have the highest concentration of toxin but all parts of the plant can have ill effect. If you accidentally eat some of the plant, you will be warned first by the intense burning in your mouth and mucous membranes. Next comes nausea and vomiting and slowed heartbeat. Within 6 hours, it is all over unless you seek treatment immediately.

10. Castor Bean Plant – We have all heard about the terrible taste of castor oil and its ill effects on the digestive system, but did you know the plant was extremely deadly? The leaves and stems of the plant are not particularly toxic, but the seeds or beans are fatal if ingested. The compound responsible is Ricin, a poison that is 6,000 times more poisonous than cyanide and 12,000 times more toxic than rattlesnake venom. However, the castor bean plants are quite beautiful with deeply notched, large, glossy leaves and funny spiky fruit.