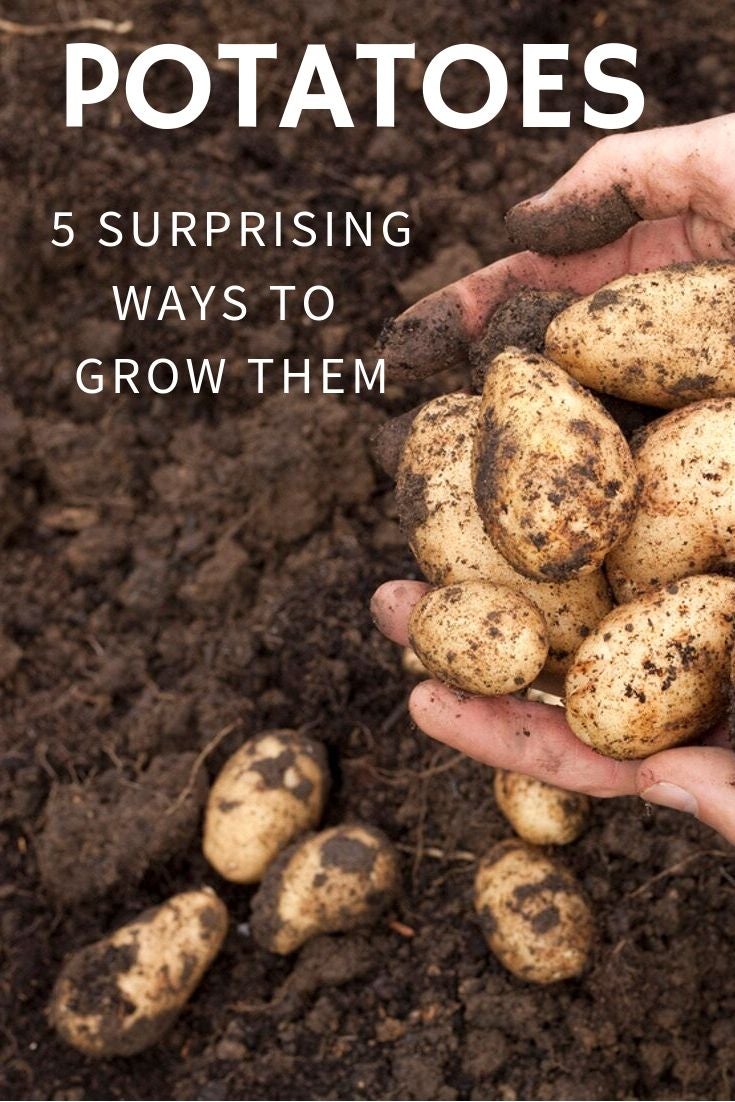 For years, I lived in an upstairs apartment with no garden. I wanted, no, I needed to be able to grow my own fresh veggies and herbs. While the space lacked a garden proper, it did have lots of exterior stairs that happened to be situated in full sun. So, as they say, ‘necessity is the mother of invention,’ and those stairs became my garden where I grew everything from tomatoes to potatoes. Yes, you heard me correctly, even potatoes. In fact, there are a number of surprising ways to grow potatoes and here are five of them.

1. Grow potatoes in containers. The traditional way to grow potatoes in the garden is by using the trench and hill method. This requires a good amount of garden space, but since I lacked that commodity, I thought what do potatoes really need? They need some depth”¦so why not container grow them in a fairly deep pot, but not one that is overwhelmingly huge – such as 5-gallon pickle bucket. Any large bucket will work, it just so happened that I worked in a restaurant at the time and it was free and readily available.

2. Grow potatoes in baskets or tires. Growing potatoes in a bucket is just one way to contain the plant. I have read of one person who grew potatoes in a laundry basket! They can be grown in vertically piled up old tires or even in a sheet of heavy black plastic that is rolled into a tube with holes cut along the sides. Old garbage cans also make great potato growing containers.

3. Grow potatoes in a bag. Potatoes can even be grown in sacks or grocery bags or grow bags. Just place the sprouted potatoes in amongst some nice light nutrient-rich soil. As the potatoes grow, continue to cover or hill them with more of the soil.

4. Grow potatoes in straw. Spuds can also be grown in straw, which eliminates digging them from the dirt. This method begets clean easily grown potatoes and the straw will just become mulch in the garden. The seed potatoes are planted on the soil’s surface and then covered with straw. As the plants grow, more straw is added to cover. A similar method can be employed with leaves too.

5. Grow potatoes vertically. The most amazing way to grow potatoes generates a double whammy – that is, you produce not only potatoes but tomatoes as well. Growing the TomTato is a great space saver. A TomTato is a grafting of the top of a cherry tomato to the bottom of a white potato plant. It is a single plant that produces two different crops and is a terrific space saver, as it can be grown vertically. Hands down the coolest idea I’ve seen for a while! You can also grow them vertically in a potato tower.

Tell us what you think: Leave a comment
3 people are already talking about this.
Printer Friendly Version
Read more about Top of the Crop
<PreviousNext>
Did you find this helpful? Share it with your friends!
FacebookTweetPinEmail