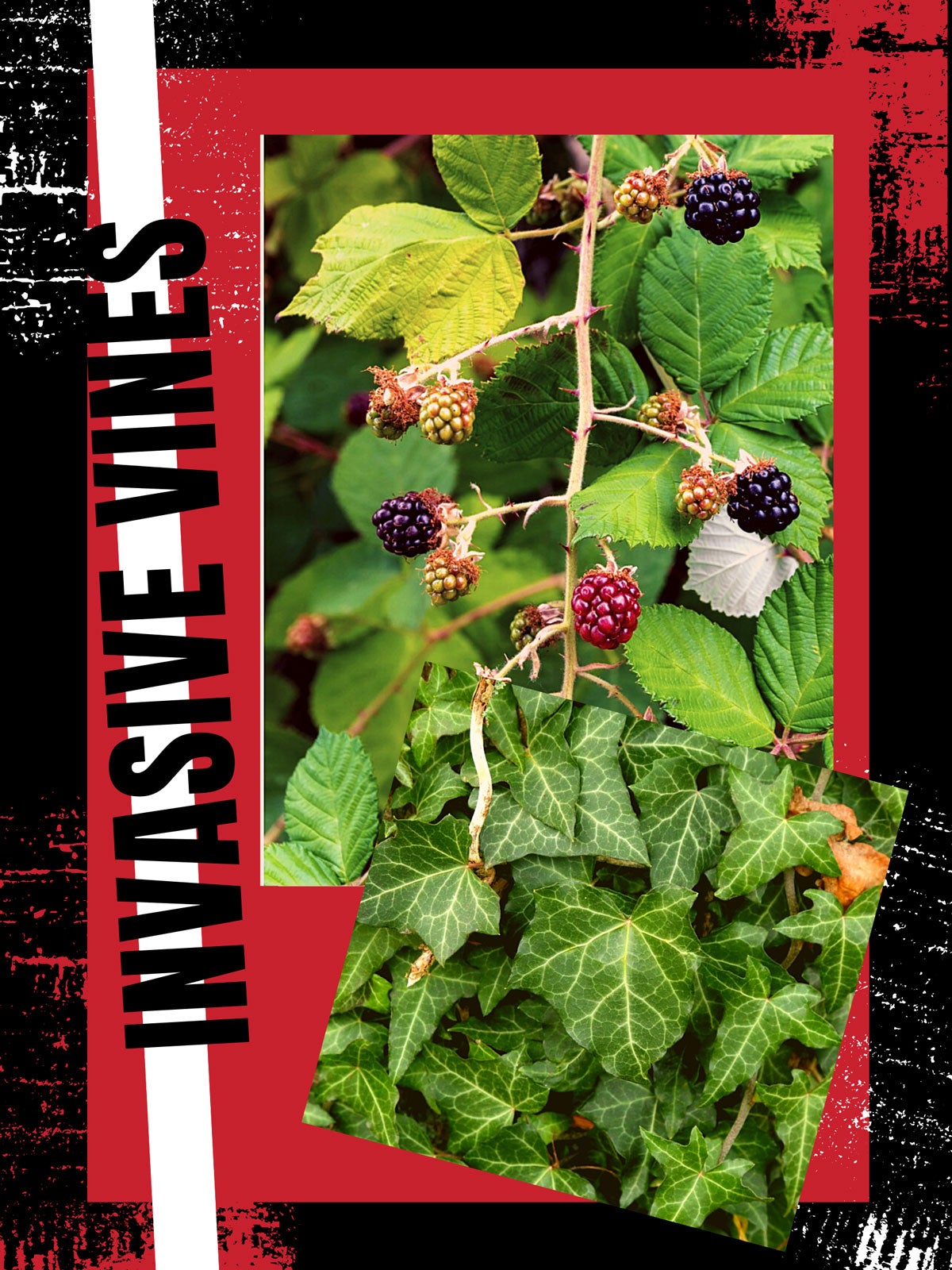 My feelings about vines are mixed. I love the look of vines, especially climbing over a fence or an arbor, but as a gardener and nature lover, I am concerned about invasive species. Several types of rambunctious vines fall into this category here in the Pacific Northwest. Here are TWO of the worst.

English ivy is beautiful and well-behaved in many places, but it’s an invasive monster in the Northwest. The vine blankets shrubs and wraps itself around trees, which frequently die for lack of sunlight. The weight of the vines can also break branches, weaken trees, and make them more susceptible to disease.

Ivy grows year-round in the moist, mild climate of Western Oregon and Washington. It crowds out native ferns and wildflowers, and it keeps wildlife away, with the exception of rats that live under the thick vines. Some species, including certain butterflies, are endangered because this invasive vine plant has displaced the plants on which they rely.

You might think erosion control would be a plus, but ivy actually makes things worse because water (and there’s a lot of water in the Northwest) just runs under the thick mats of vines and takes the soil with it. Watershed health is another problem.

Himalayan blackberry forms impenetrable thickets in forests, meadows, riparian areas, along fences and roadsides, in pastures, and anywhere else it gets a foothold from British Columbia to Southern California. Once established, it can choke out native trees, including Douglas fir, Oregon white oak, and ponderosa pine. If that weren’t enough, the canes serve as fuel for wildfires.

The vines are extremely difficult to control and takes many years of hard work. Generally, attempts to eradicate vines involve removal of the top of the plant and the major roots, followed by spraying of sprouts that pop up later. Even tiny sprouts left behind can soon take over. Often, heavy equipment is used to pull the vines from the ground.

Himalayan blackberry seeds are spread with the help of birds and animals and can remain dormant in the soil many years. The plant also reproduces by roots and rhizomes, with new plants forming at the nodes. Roots can reach lengths of 30 feet (9 m.) and the plants can reach heights of 15 feet (4.5 m.).

Attempts at controlling invasive species cost Oregonians around $125 million every year, in spite of countless volunteer hours. So, as you can see, I’m not much of a fan when it comes to vines in the landscape.