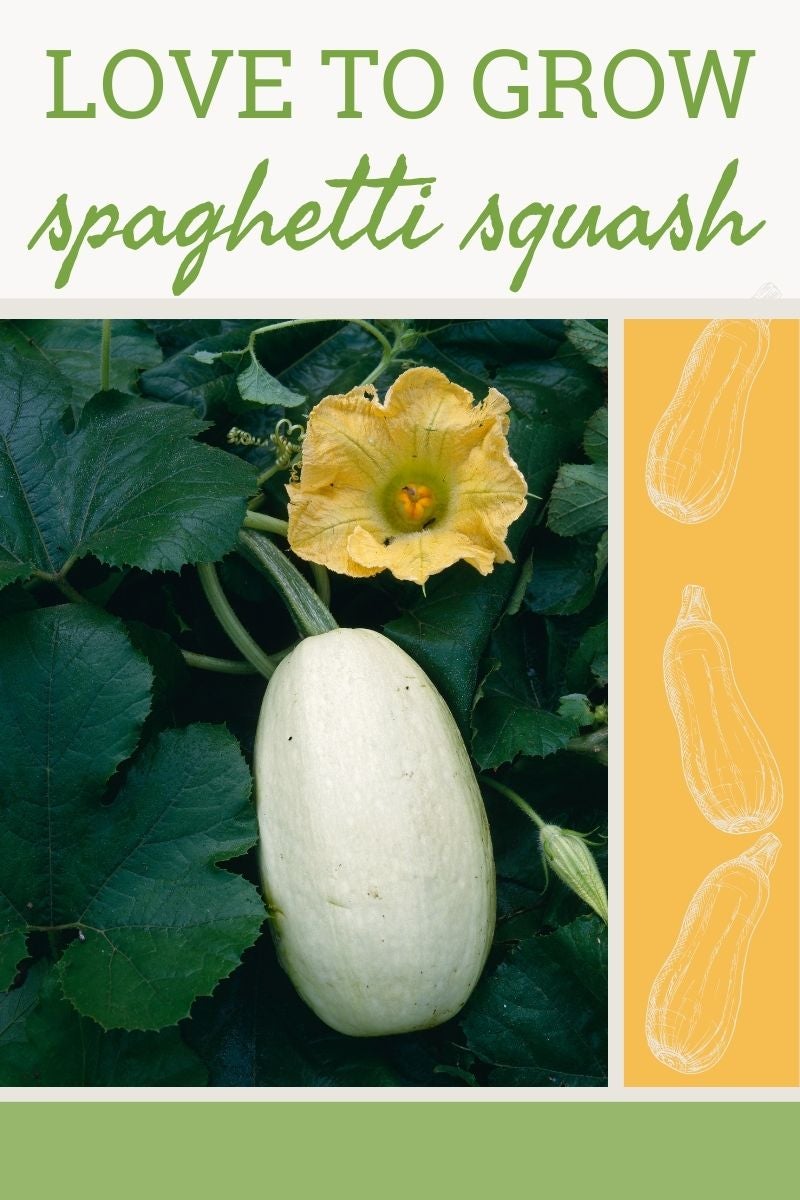 I love spaghetti squash. I like food you can play with and spaghetti squash fits the bill. Who hasn’t slurped spaghetti off a fork as a child, or as an adult for that matter? Spaghetti squash is unique among the winter squash in that it has the consistency of well, spaghetti, and can be used just like the pasta.

In the spirit of gardening for use as food, one year I bought a pony pack of spaghetti squash plants. I did not start them from seed because my growing season is on the short side and squash don’t like to be transplanted.

So I prepared an area abutting our chain link fence to plant the squash. The plan was to cover the unsightly fence, provide some privacy and grow my squash vertically to save space in the garden.

I had read that spaghetti squash vines grow as long as 8 feet (almost 2.5 m.) in length, but I have to admit something here. Size has no meaning for me. I think everyone is my height and that can’t be possible.

So I plunked in the seedlings and they were off. They grew so quickly in the full sun I could practically watch them grow. And they grew, and they grew”¦

The next thing I know, they are up to the top of the six foot fence, running along the top and then comingling in a corner. Tangled together as they were I had no idea (as if I would) how long the vines were but they were impressive.

Even more impressive was the sheer abundance of sunny yellow blooms they produced. Soon after the blossoms faded, signs of tiny squash appeared that grew at an extraordinary rate. I can’t fathom heights, but I can count. I started counting; 2, 4, 10, 12, until I reached 19 maturing butter yellow squash.

Have I mentioned that there are only two of us in this household? One of whom will not each a vegetable. And my spaghetti squash was weighing in on the robust side; probably eight pounds (over 3.5 kilos) each. This was the mother lode of spaghetti squash. When it came time to harvest the golden yellow fruit, because fruit not veggie it is, I was awed by the haul.

Needless to say everyone I knew got spaghetti squash and I still had plenty to tide me over through the winter. I’d do it again.

Tell us what you think: Leave a comment
2 people are already talking about this.
Printer Friendly Version
Read more about Top of the Crop
<PreviousNext>
Did you find this helpful? Share it with your friends!
FacebookTweetPinEmail