Top 10 Crops to Grow for Thanksgiving 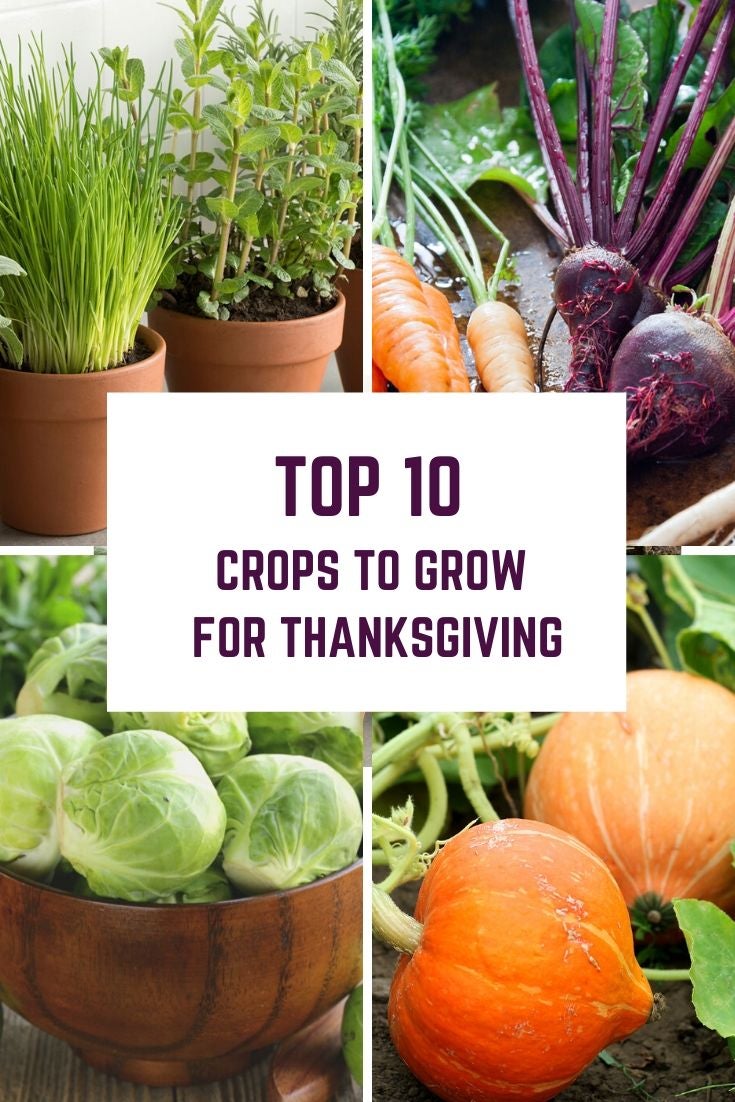 Thanksgiving dinner is all about tradition. The meal usually revolves around the original staples served at the first Thanksgiving: turkey and side dishes of roots, vegetables and grains introduced to the settlers by the Native Americans. Recipes are often handed down from generation to generation and, yet, as decades pass, the dishes have often been tweaked or new menu items added. That means that the few standard ingredients the Pilgrims and native people enjoyed are not the only items on the menu anymore. It also means that the gardener has more options for crops to grow for Thanksgiving. Here are the top 10 crops you can grow for Thanksgiving.

Corn – Well, corn has to be number one. Corn sustained the Pilgrims through the frigid winter of 1620. Until they reached the New World, Europeans had never seen maize, but it was a staple crop for the Native Americans who introduced it to the Pilgrims. Corn is an ancient crop dating back at least 7,000 years and was a mainstay of Inca, Maya, and Aztec civilizations. Plus, it’s easy to grow and there are so many ways to prepare this vegetable.

Winter squash – Winter squash would be my second recommendation. It stores well, comes in many varieties, and was part of the original trio of the “three sisters,” a Native American planting technique which incorporates corn, squash and beans. Pumpkins, too are essential. Plus, what would Thanksgiving be without pumpkin pie?

Beans – Piggy backing off the “three sisters,” would, of course, be beans. Again, there are different bean types, from green beans to drying types of beans like pintos. Dried beans have the advantage of a lengthy shelf life and can be enjoyed for months. Green beans can be canned or frozen to extend their life. And who doesn’t enjoy green bean casserole?

Potatoes – Potatoes are a Thanksgiving staple and can be roasted, baked, fried or boiled and mashed, wedged, scalloped, etc. New World veggies from the Andes, potatoes area good source of carbohydrates along with a modicum of protein and minerals.Try something new this year and serve blue potatoes or yellow Yukon Golds.

Root crops – Root veggies, such as carrots or turnips, are excellent additions to the holiday meal. They can often be harvested up to or nearly up to Thanksgiving in many areas and are as versatile as potatoes.

Leeks – Leeks are one of my favorites. They are started in the early summer to be harvested as needed from October until January. Similar to an onion in flavor but much milder, leeks add superior flavor to stocks, sauces, and soups.

Brussels sprouts – In my temperate zone, Brussels sprouts are a must in the garden and on the holiday table. They can be harvested from September to March, are resilient to freezing and, in fact, taste even sweeter after a frost.

Kale – Nothing beats kale, and Dinosaur kale, especially, has a mild, sweet flavor and can be harvested into January. To harvest, cut the larger, outer leaves and leave the smaller,interior leaves to grow. You can pick nutritious kale until the snow buries it.

Leafy greens – Greens, such as arugula, can be planted every 3-4 weeks to ensure successive harvests of fresh green salads. Most leafy greens tolerate frost, but if you live in a particularly cold region, protect the crop with a floating row cover.

Herbs – There is no comparison between fresh and dried herbs. Fresh herbs win hands down. While parsley is a tender herb, others such as sage, rosemary and thyme are hardy perennials that will often be harvestable around Thanksgiving. Plus, they will continue to grow and provide delicious fresh herbs for years to come.