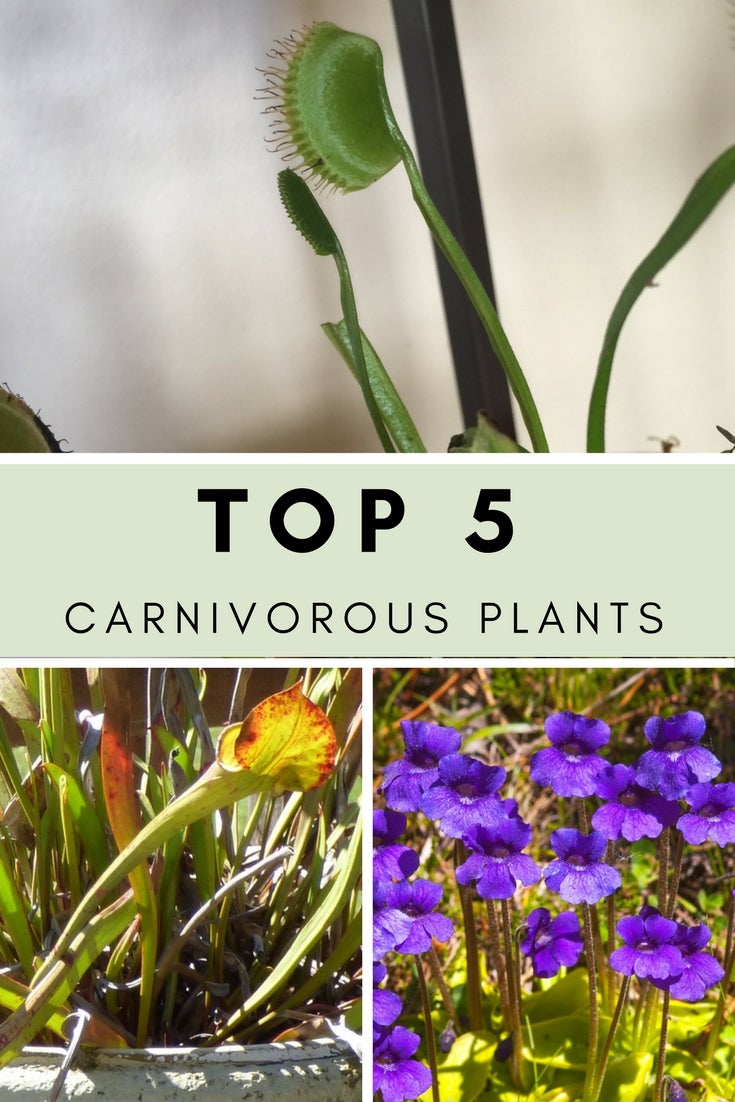 You don’t need to be a 10-year-old to be fascinated by plants that eat insects. Carnivorous plants are amazing in their adaptations, forms and methods of catching prey. Each is unique and some are even native to North America, with hardiness suited to the cooler climes. Carnivorous plants are particularly useful in the greenhouse or solarium, where excess humidity or moisture often causes insect problems.

Pepper a few carnivores amongst your other prize plants for easy, non-toxic pest control. The plants are not only useful but will awe and amaze any age group. Here are 5 easy-to-grow carnivorous plants:

1. Sarracenia – Also known as the pitcher plant, it is native to North America where the plant lives in moist to swampy locations. Pitcher plants are classics among the carnivores. Easily recognizable by their flared funnel-shaped trap. This is a modified leaf that has sticky hairs on the interior preventing insects from getting out. In the end, the hapless bug is drowned in digestive enzymes at the base of the funnel. Many of the forms come in bright colors and have attractive designs on the hoods.

2. Drosera – The sundew group of plants are passive trappers. They sit in innocent but deadly wait, adorned with pad-like leaves covered in very sticky hairs. These glue insects in place, effectively preventing escape. The mucilaginous glue ensnares the insect and the pest’s struggles alert the plant to close the leaf. Tiny glands then release digestive juices that dissolve the insect and move the nutrients into the plant. There are over 194 species of sundew with a form native to every continent except Antarctica.

3. Dionaea – Almost everyone can recognize a Venus flytrap. These are common in many nurseries and garden centers. What is intriguing about this carnivore is the leaf’s ability to move quickly. The adapted leaves are paired and hinged, closing much like a clam shell when an insect is detected. Many species have brightly colored leaves fringed with tooth-like hairs at the edges. These mesh together when the leaves close, creating a caged trap and then enzymes are released. Plants receive nitrogen and other nutrients as the insect is digested. The plant is both scary and comical at the same time and seems to be designed especially for a role in Little Shop of Horrors.

4. Utricularia – Bladderworts have the only true trapdoor amongst the carnivorous plants. It is a small aquatic plant that can thrive at marginal spaces or completely submerged. Tiny bladders hang from the plant, each with a pocket and flap that close much like a garage door. Water cannot enter the bladder due to the mucilaginous secretions and tissue that glues shut. Once an insect is inside, it is summarily consumed and nutrients delivered to the plant. As an added bonus, many species have brightly colored, attractive flowers. Plant these near a water feature or pond in warmer regions, or bring them indoors in winter in a moist, humid environment.

5. Pinguicula – The innocuously named butterwort plant is another native. There are over 80 species whose ranges include both North and South America as well as Europe and Asia. These fun plants produce lovely tiny blooms with 5 petals and most start out as rosettes which are not carnivorous. Once the succulent leaves form, the plant becomes deadly to insects. Leaves are often pink or bright lime green and decorated with droplets of sticky sap. This traps insects much like flypaper and hairs on the leaves begin to release several digestive enzymes. Most plants in this family seem to need a dormancy period, during which you can reduce watering. Once the succulent leaves appear, increase moisture levels and watch the plant do its magic on annoying gnats and other pesky bugs.