Top 5 Garden Complaints and How to Fix Them 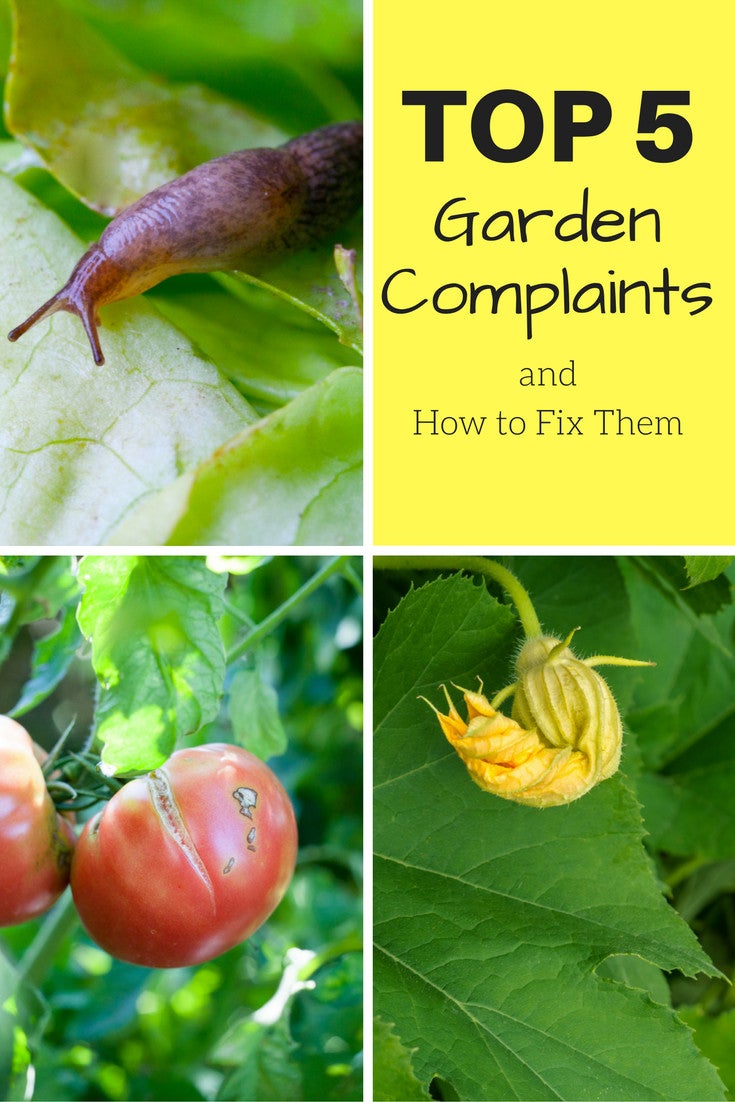 It isn’t like me to complain but….most of us have a gripe or two, and gardening complaints are no exception. Some of them are minor and some of them are major. While these differ from person to person and gardener to gardener, here are the top 5 garden complaints common to most everyone.

1. Slugs/snails. I live in the Pacific Northwest and one of my biggest grumblings has to do with slugs. Seriously, we have several varieties, each larger than the last, and a plethora of snails – which are really just slugs that lug their homes around on their backs. These marauders can do a number on any tender, young green. I’ve tried hand picking (yuck!), barriers, raised beds, diatomaceous earth, bait, and I even have a cat that seems interested in them, although I haven’t actually SEEN him eat them. I hear a healthy population of toads will do the trick and, apparently, they don’t like to cross copper wire. Note to self: acquire toads and copper wire.

If I ever get a handle on the slugs so the produce will grow, I have no doubt that a litany of abuses will spew off my tongue regarding its downfall. It could be bitter cucumbers, or a lack of kernels on my corn, or cracking tomatoes, or squash blossoms that drop prematurely. But it isn’t like me to complain…

2. Bitter cucumbers. The bitter cucumbers may have been kept on the vine too long or the weather was inordinately hot and dry. Next time, mulch around the plants and keep them watered and hunt diligently for the fruit every day. Also, peel the fruit before eating it. This will rid it of some of that bitter flavor.

3. No corn kernels. Corn ears that don’t fill with kernels are due to pollination issues. Hot, dry weather might be the cause or planting the corn too far from each other. Corn is pollinated by the wind, so it needs to be in close proximity. Plant it in blocks of 3-4 rows rather than one long row to increase pollination. Also, a surplus of nitrogen in the soil, low potassium, and even insect feeding can result in a low kernel count.

4. Tomato fruit splitting. Cracking tomatoes are no doubt the result of insufficient water. The plants need at least 1-2 inches of deep watering once a week; in extremely hot weather or if the plants are kept in containers, more often. Mulch around the tomatoes to help retain moisture. Red plastic mulch has the best success rate to help prevent tomato cracking, but wood chips or other organic mulch will do the trick as well. Also, be sure to feed your tomatoes according to the manufacturer’s instructions. A well fed tomato plant is less likely to produce cracked tomatoes.

5. Blossom drop. As to the squash blossoms dropping prematurely? Squash produce both male and female blossoms. It’s normal for vines to produce 10 or more male flowers before the female are formed, so some of them will likely fall. This is very common early in the season, so don’t panic!

And if the garden is thriving, the lawn will be driving me nuts instead. What are all those dead spots in the grass – probably the dog. Why is the lawn 50% grass and 50% weeds? The neighbors got rid of the moles in their yard and now they’re in mine. And speaking of mole hills, what’s with all the ant hills in the grass? And while I’m on the subject of critters in the grass, why won’t the squirrels stop digging in the lawn and what on earth are they looking for?! But I don’t like to complain…