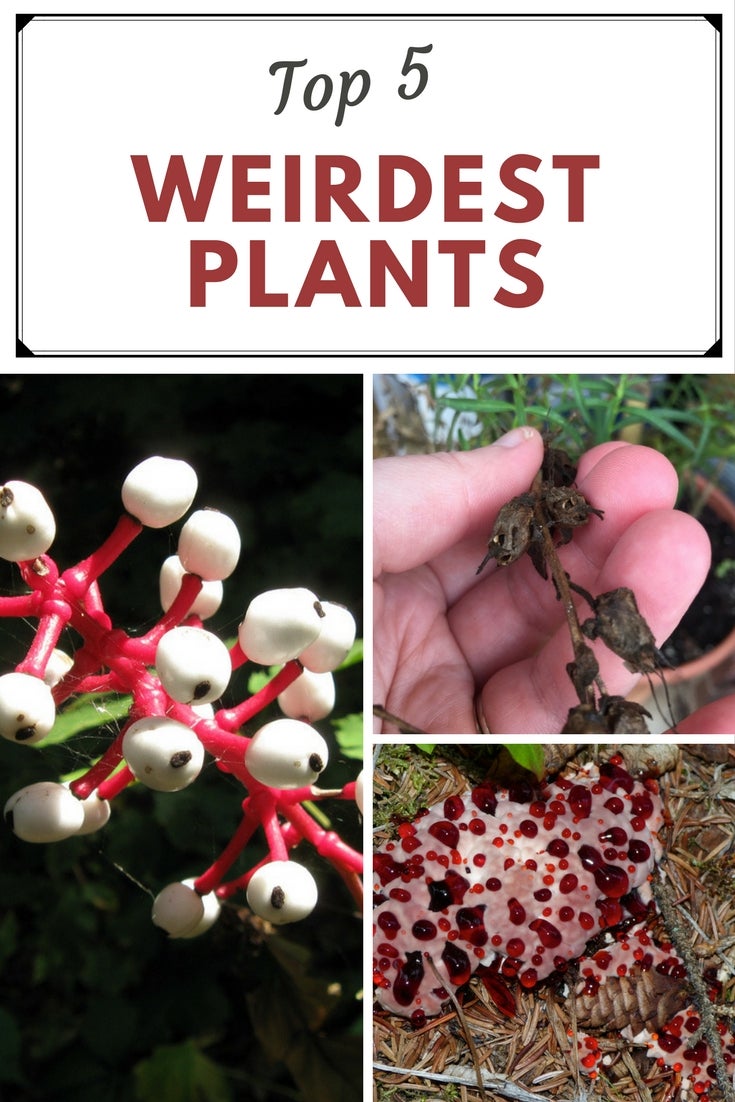 The world is full of weird and wonderful plants. Many grow in far-off reaches of tropical forests or rugged mountains, but other strange plants may be found near your home, or even in your back yard. Read on to learn about these five really weird plants.

1. White baneberry (Actaea pachypoda) – Often known as doll’s eye because the fruit, shiny white berries with prominent black spots, look like little eyeballs. The bright red stems add to the allover weirdness of the plant. If you’re thinking about planting white baneberry, be aware that the entire plant, especially the berries, are highly toxic and can lead to cardiac arrest. (Birds are unaffected.)

2. Snapdragon (Antirrhinum) – Kids love snapdragons because each colorful flower looks like a dragon mouth when the sides of the blooms are gently squeezed. However, it’s not the pretty, old-fashioned flowers that qualify snapdragon as a weird plant, but the dried seed pods, which look like tiny brown skulls. Just let the flowers die on the plant, then come back and take a close look. This may explain why ancient cultures believed snapdragons have magic powers.

3. Giant water lily (Victoria amazonica) – Native to tropical South America, the giant water lily is the largest water lily in the world. The enormous leaves, measuring about 7 feet across, are anchored to long stalks that emerge from a stem that grows in the mud. The flowers, which smell like pineapples, are spectacular but only live a couple of days. One water lily plant produces up to 50 gigantic leaves.

4. Bleeding tooth fungus (Hydnellum peckii) – This fungus oozes thick, blood-red juice from tiny pores on its surface. (The liquid may also be pink, orange, or almost black.) If that isn’t weird enough, bleeding tough fungus produces tooth-like projections under the cap. Although bleeding tooth fungus is edible, it smells really bad and tastes even worse. This weird plant grows in forested, mountainous area in much of the world, including North America, Europe and South Korea.

5. Baseball plant (Euphorbia obesa) – This plant is named for its plump, round shape. Valued by collectors, the plant has been harvested (and poached) nearly to extinction and is now protected by the government of South Africa. If you’re interested in growing baseball plant, it isn’t difficult to find at specialty nurseries.

Tell us what you think: Leave a comment
2 people are already talking about this.
Printer Friendly Version
Read more about Top of the Crop
<PreviousNext>
Did you find this helpful? Share it with your friends!
FacebookTweetPinEmail