Enjoy the Benefits of a Flexogen Garden Hose 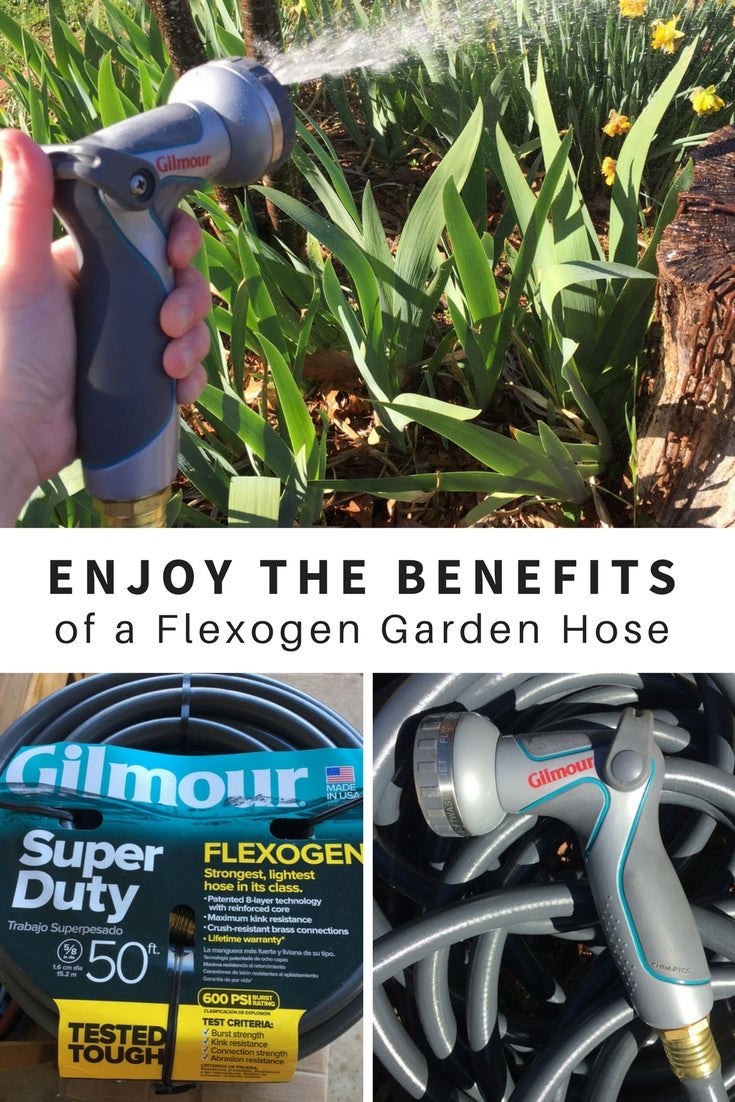 Well, it’s nearly springtime, although in many areas you can’t tell what season it is. Time to get out that garden hose and commence to watering those beds and lawns again. I don’t mind watering if you have the right hose – nothing that’s difficult to maneuver, and especially nothing too flimsy or prone to snags or kinks along the way. No one wants their water flow abruptly stopped by tons of kinks. Watering the garden should be a more enjoyable experience.

I’ve went through dozens of hoses in an attempt to find one that meets all my demands. I’m not a big person but a short, middle-aged woman (most kids are taller than me) so I do not need or want something that’s too much to handle. I understand heavy duty to mean something that holds up well and is durable – not actually HEAVY! And then, there’s the kinking issue. Please, don’t tell me your hose doesn’t kink unless you can stand by that. Far too many hoses have made such claims and failed. No one wants to spend all their time in the garden unkinking hoses when it can be better spent doing what you’re out there to do in the first place – watering.

Oh, and here’s a good one”¦the cute little hoses that seemingly “grow” once you turn the water on and draw back up after you use them might be great as far as being lightweight and small enough for easy storage BUT even those kink on occasion and, as once happened to me, burst. Yep, knotted right up, grew into a huge water balloon and then BOOM! No more hose. I then had to rely on my backup hose, which in addition to leaks was black, making it a bit warm to the touch when left sitting in the sun.

While you may be able to find a hose that meets one or two of its claims, there’s always at least one more area in which it flops. Having recently gotten yet another new hose to replace the one that popped last season, I was skeptical as ever. This particular garden hose came from Gilmour, which is a respectable company in the U.S. that specializes in hoses of all types, so I remained hopeful that theirs would meet my needs.

Since it’s not quite time for the more extensive watering in the garden, I’ve only had minimal use of it thus far. That said, the FlexogenÂ® Super Duty hose has exceeded my expectations and seems to be holding up well. I was a bit worried that this, like heavy duty hoses of the past, would be too much for my small stature to maneuver without a lot of heaving and pulling. I was wrong. It’s actually rather light. Ok, but will it snake around corners without issue? And what about kinking? Check and check. Not once did the hose get hung up on anything, nor did it kink. I’m impressed. But wait, what else does this hose offer?

Its brass connections are crush resistant and not prone to leaking, another issue with many hoses (like my backup). I can’t tell you how many times I’ve been showered with water squirting from the connections. I have a rather large expanse of lawn that I must cross to reach some of my garden beds. This means a 50-foot hose isn’t gonna cut it. Luckily, adding another 100 foot of the Gilmour hose was no problem. And I didn’t get wet. This tough hose not only handled our somewhat rocky terrain without a scratch, but with eight layers of protection, I expect it will hold up all season (and if Mother Nature has her way – winter-spring, spring-winter – this shouldn’t be hard to test). After all, durability is important.

To top it off, I tried their nifty Thumb Control Nozzle. Unlike my other spray nozzle that somehow always gets gunked up and tends to cramp my hand, this one connected to the Flexogen hose with ease, and the all-in-one thumb control made it simple to adjust the water flow, complete with eight spray patterns. Just turn it on and change the flow with your thumb. No constant squeezing to keep the water going. The various spray patterns make it easier to water what you want, where you want and how much you want.

Nothing is better than a product that does what it says it will, and it’s even better when it’s backed by a lifetime warranty. Now with the Flexogen hose and thumb control nozzle from Gilmour, instead of dealing with kinks or worrying about getting wet from leaks every time I water the garden, I can enjoy it.

The above article was sponsored by Gilmour. The information contained in this article may contain ads or advertorial opinions.
Tell us what you think: Leave a comment
Printer Friendly Version
Read more about Garden Trends
<PreviousNext>
Did you find this helpful? Share it with your friends!
FacebookTweetPinEmail