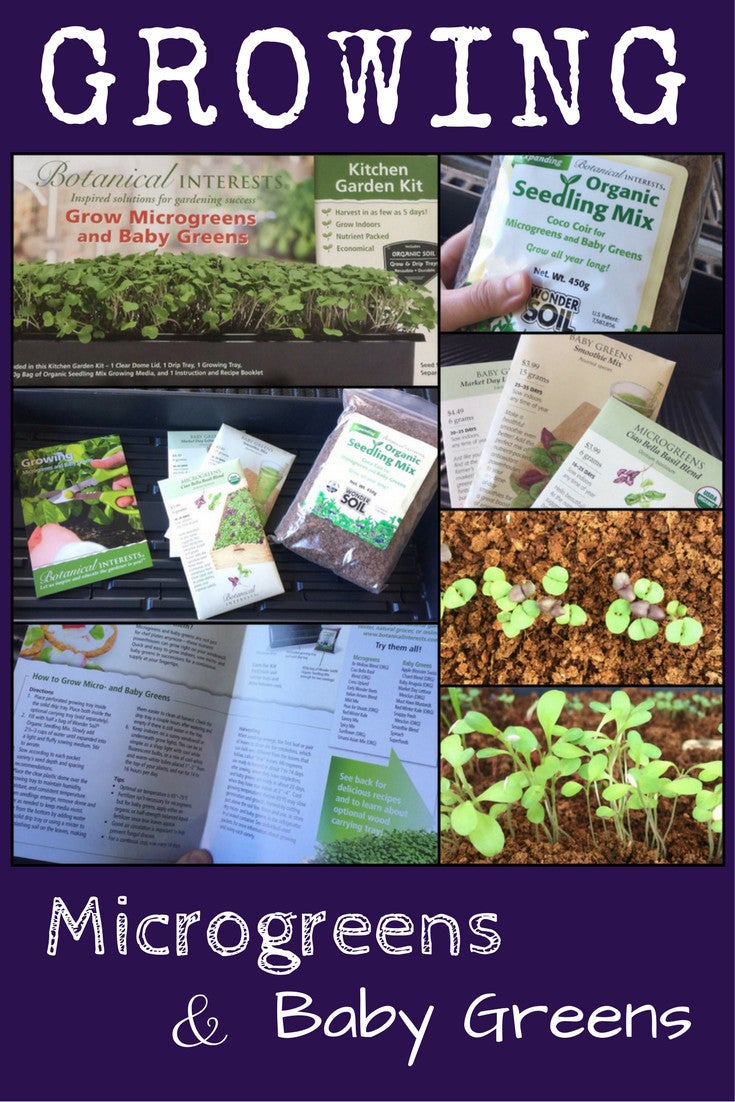 One of the perks of having a cushy gardening job is the opportunity to try new plants and other products for the garden. You also get to learn new things. You can be a gardener umpteen years and still not know everything there is to know about gardening…or the plants that can be grown. Recently, I had the chance to try my hand at growing microgreens and baby greens, plants that I have grown at one time or another but just didn’t know it. Yes, I admit it; before this “project,” I hadn’t really thought much about microgreens, though baby greens I was reasonably familiar with.

So I decided to do what I normally do before taking on anything new. I did some research. What are microgreens anyway? And how exactly are these different from baby greens? Turns out that microgreens are often confused with sprouts, but rather than simply being the “root, seed and shoot,” these immature greens are harvested when about a couple inches tall, or about a month after germination – stem, cotyledons and first set of true leaves.

Baby greens are similar and harvested around the same time. They’re simply the babies of leafy vegetables like kale, spinach, beets, arugula, etc. Microgreens may include vegetables, herbs and most salad greens. Both microgreens and baby greens add color, texture and flavor to salads, sandwiches and a myriad of other dishes. They’re also good for you…chock full of nutrients. And who doesn’t want to eat better, healthier foods?

These little plants don’t just pack a punch of nutrition either. They’re also ridiculously easy to grow, so easy ANYBODY can grow them and pretty much anywhere too! If you have a sunny windowsill, a shallow container, potting mix and seeds, you’re halfway there. And if you use a microgreens/baby greens growing kit, even better. That’s what I did.

Having been given the opportunity to try out the Kitchen Garden Kit for growing microgreens and baby greens from Botanical Interests, I learned real quick just how easy to grow these little greens are, requiring very little space. When my kit arrived, I opened it up and found everything I needed to get started…growing tray with cover, medium, and instructions (seeds separate).  All I had to do was add seeds and water.

I will admit I was skeptical at first about the soil medium, as the directions said to only use half the bag rather than all of it. When I poured half out into the tray, it barely covered it. But once I added the water, it was like magic happening right before my eyes. It grew…and fast! What started out as nearly no growing medium quickly became a fluffy mix of soil that filled out every corner of the tray. Cool!

Then came the seeds, which I carefully sprinkled into my shallow furrows and lightly covered with soil. Add the top to the little “greenhouse,” stick it in a sunny window and you’re done! Literally, only a bit of misting here and there, and that’s it. Within just a week or two, the microgreens/baby greens will begin popping up. And once they’re ready for harvesting and used, you can grow some more. A nearly never-ending supply of fresh, nutritious food right at your fingertips. What could be better than that?

The above article was sponsored by Botanical Interests. The information contained in this article may contain ads or advertorial opinions.
Tell us what you think: Leave a comment
1 person is already talking about this.
Printer Friendly Version
Read more about Garden Trends
<PreviousNext>
Did you find this helpful? Share it with your friends!
FacebookTweetPinEmail