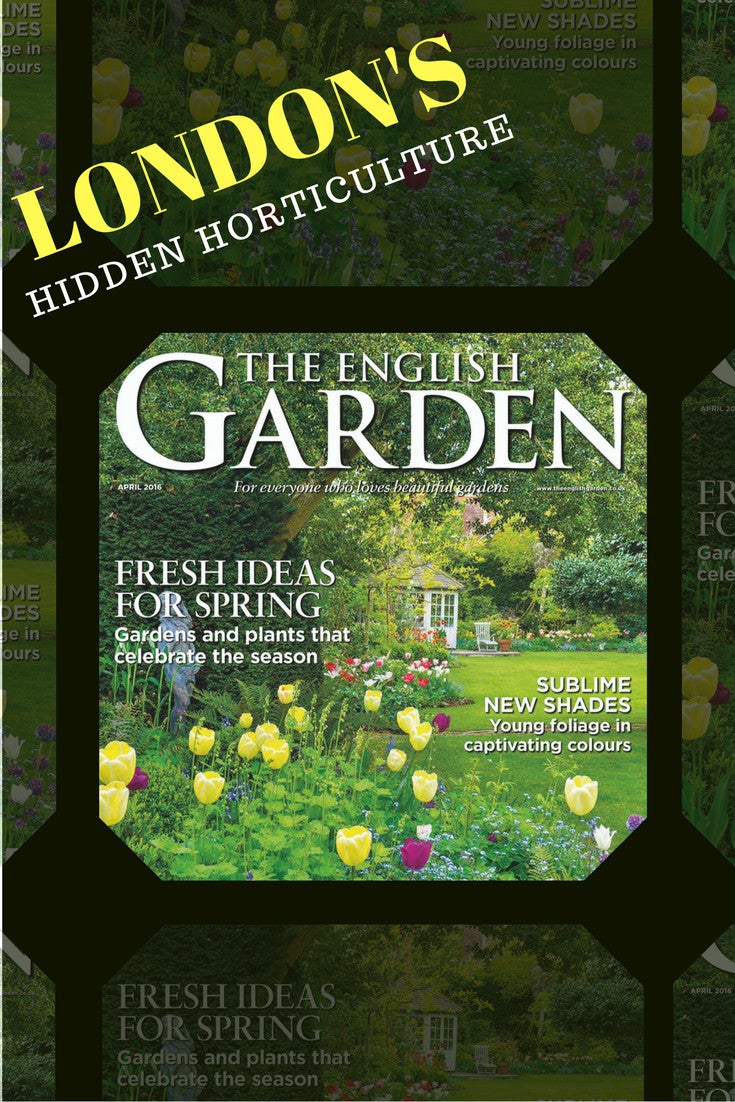 Clare Foggett is the editor of The English Garden, the monthly magazine for everyone who loves beautiful gardens, published in both the UK and United States. She is also Chairman of the UK’s Garden Media Guild, the professional body representing gardening writers, journalists and photographers.

I recently moved to London, for my new job, editing The English Garden magazine. Yet while the magazine features beautiful, quintessentially English gardens from across the UK – they make up the majority of its pages – the chances of me being able to afford a flat or house in London with a garden are about as likely as finding a unicorn nibbling on the cabbages in my vegetable patch. But before you dismiss me as a fraud, I do still have a garden, it’s just 100 miles away in rural Northamptonshire. I escape there to keep up with the garden and enjoy the fresh air as often as I can; in between times, I have to content myself with the horticulture London has to offer.

Much of it is glimpsed from the windows of a train, or spied from the top deck of a red London bus. As the bus takes me to the train station each morning, I pass a grove of olives, planted in the middle of the busy dual carriageway that whisks commuters up Champion Hill. They’re underplanted with a swathe of daffodils, and beds of sunny yellow polyanthus and double flowered pink Bellis perennis daisies – much more in keeping with The English Garden but much less brave than the adventurous municipal landscaper who must have specified the olive trees in the first place.

London gardeners are lucky though. The heat island effect created by all the buildings, concrete and tarmac raises London’s temperature by a degree or two. Things over-winter here that would turn up their toes during a winter in my Northamptonshire garden. My train takes me past a beautiful Acacia dealbata just outside Brixton, currently sporting its lemon yellow powder-puff flowers. It wouldn’t survive much further north in the country; I wish I was below it, enjoying the flowers’ sweet, almondy mimosa scent, rather than squashed against the doors of the stuffy, standing-room-only carriage. I wonder each day who planted it – it must have been a keen gardener surely? Mimosas don’t get planted by accident. I see loquats too (Eriobotrya japonica), their glossy crinkly leaves buoyant with health – they seem to be a popular choice in the back gardens that run alongside the train track – but will I be able to spot fruit in summer?

My walk from Victoria to The English Garden‘s office takes me past South African pelargoniums in window boxes that are still alive and kicking, some even flowering, even though late February brought some of this winter’s coldest temperatures. No point trying to keep these outside all year in frosty Northamptonshire. Then in Chelsea, I walk past the plant that astonishes a country gardener like me the most: an enormous avocado, growing from a basement right up to the second storey of a white stucco townhouse. Originating from South America, it won’t fruit here, but the fact it’s alive is testament to the capital’s mild conditions. I used to get excited when I found an avocado stone that had germinated in the heat of my compost heap, and always potted them up to grow on, but lost them every winter, even in the greenhouse. I wonder if this one grew from a discarded stone, or whether a gardener planted it, full of optimism and dreams?

Stolen glimpses of unusual plants make the daily commute more interesting, but London has much more to offer gardeners. Surprisingly leafy, with large well-known parks, there are secret delights to be sought too. Visit in June and you could catch Open Garden Squares weekend (June 18-19), when many normally private gardens open their doors offering tantalising peeks into the kind of gardens my imagination expects to meet Virginia Woolf or Hercule Poirot in.

And even in the heart of the city, just a short walk from our office, there are horticultural treasures waiting to be discovered, such as the historic Chelsea Physic Garden, which is part of 2016’s Year of the English Garden celebrations. This is the garden where many plants that are now commonplace in our gardens, were first grown and studied in England, just after they arrived from the newly-discovered American shores. Now it boasts a unique collection of some 5,000 plants. Even if you don’t have a garden here, there’s plenty of growing going on to warm the heart of a gardener.

The above article was paid for and sponsored by The English Garden . The information contained in this article may contain ads or advertorial opinions.
Tell us what you think: Leave a comment
Printer Friendly Version
Read more about Garden Trends
<PreviousNext>
Did you find this helpful? Share it with your friends!
FacebookTweetPinEmail