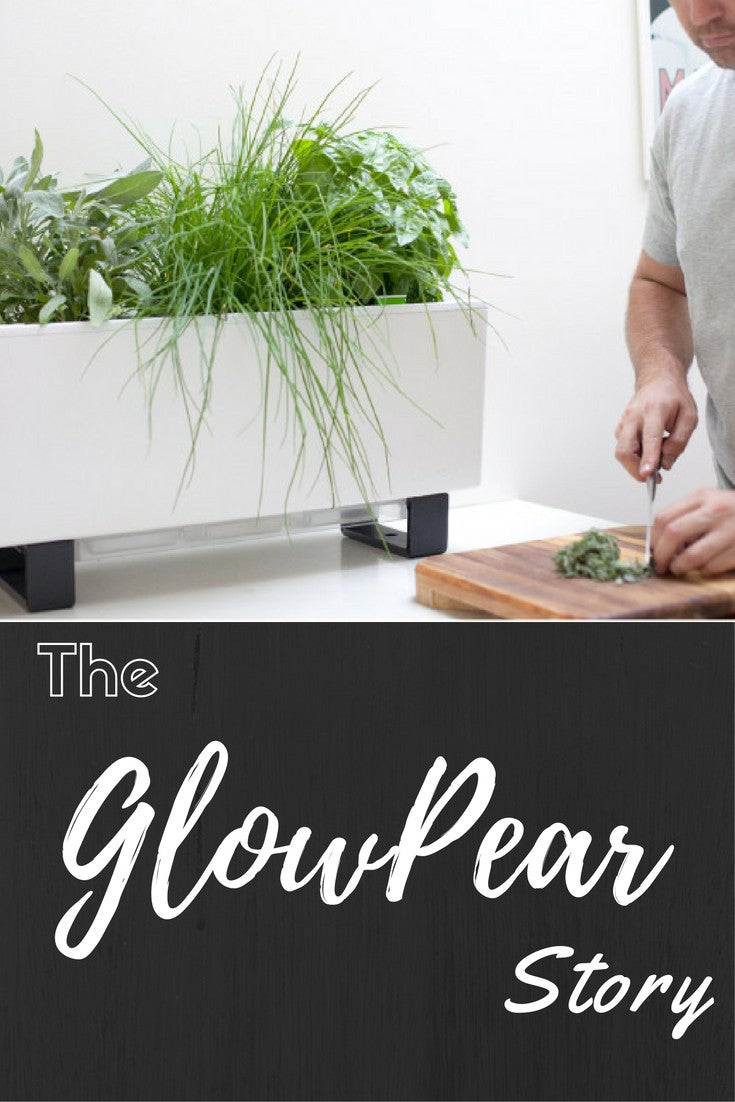 Image by The Glowpear Mini Self Watering Planter

Vertical may be the new black, but you’ve never seen it done like this.

Unlike its vertical garden predecessors, the Glowpear Mini is designed to be seen and engineered with the planting depth and functionality to open up a new universe of planting options. Run it up a wall, hang it over a balustrade, sit it on a ledge, or build it into a design of your own. Equipped with Glowpear’s set and forget self-watering technology and real-time water level feedback, this one does it all.

GROWING PASSION
Fenn’s passion for growing food in small spaces is palpable, and is the driving force behind Glowpear’s relentless search for better urban farming solutions. Fenn’s mantra is both simple and compelling.

“In a fast-paced modern world dominated by processed and packaged foods, truly fresh produce is increasingly difficult to find. Fresh fruit and vegetables often spend weeks in the supply chain before consumption. Yet we seldom consider that the nutritional value of fresh produce decreases with time after harvest, and for Vitamin C in particular little may be left in green leaves after two to three days. In spite of this many of us feel we lack the time, space, and expertise to grow fresh produce,” Fenn begins.

“Imagine if there were a simple, user-friendly way to grow fresh produce in small spaces, a design that encouraged people to bring the garden into the kitchen, a solution that was compact enough to work within the constraints of any urban space and simple enough for increasingly time-poor inner city lifestyles”¦ well, you don’t have to imagine it, we’ve created it.”

“Our followers consistently share with us their love for the Urban Garden’s user friendly functionality, contemporary aesthetic, and the results they get from its self-watering system, but they also repeatedly tell us they want something even smaller, something even more compact, something vertical,” Fenn explains.

TIME TO GROW UP
The vertical gardening market has exploded in recent years, however Glowpear has made a concerted effort to differentiate its own vertical product offering from existing vertical garden options.

Fenn elaborates, “there are some really great vertical garden systems on the market at the moment, however they are designed for ornamental plants, not edibles. They are notoriously time consuming and expensive to install and maintain. They may be great for professionally installed and maintained green walls, but they don’t have the versatility and ease of use required for home owners, and the functionality required to ensure great year-round results with edibles”.

In designing a solution, the Glowpear team have focussed on three specific requirements: functionality, versatility, and simplicity.

“The design brief for Mini was to take Glowpear’s set and forget self-watering technology and reimagine it within a more compact footprint, while also allowing it the freedom to traverse various user contexts. We wanted to create a solution that was as comfortable on a kitchen bench as it was running vertically up a wall, a solution that could be effortlessly hung over a balustrade or thoughtfully built into a cavity”.

Whilst the functionality, versatility and simplicity of the Mini are quickly apparent on inspection, it is Glowpear’s attention to detail and striking contemporary aesthetic that once again come to the fore.

Pollock explains, “As a design team one of our primary motivations was to provide people with a solution that encourages them to bring the garden into the kitchen. The urban gardener doesn’t have the luxury of hiding their garden down the back of the yard. In a small space your garden is constantly on show, so aesthetics were a critical consideration in the design process.”

BUILDING BLOCKS
While the Glowpear Mini has been designed with the urban consumer in mind, Fenn admits the design team have also paid careful attention to the advice and feedback received from the many architects, specifiers and developers Glowpear works with.

Like its Urban Garden stablemate, the Mini has been cleverly designed with the agility to cross-over into the commercial market. The Urban Garden has already featured in numerous high rise apartment developments, cafes, restaurants, offices and rooftop gardens, but it is the altitude-seeking Mini that Glowpear’s commercial clients have been particularly excited about, with many already specifying the Mini into upcoming builds.

As Pollock explains, it is Glowpear’s innovative approach to the commercial market that has begun to capture the attention of some of Australia’s best designers.

“We view our commercial offering as what the tech world would call ‘open source’. That is, we provide a base modular unit that provides all the functionality and versatility you need to create amazing solutions for your project, and we hand you the keys to be as creative as you want.”

“So basically, what we’ve developed is a blank canvas”, Pollock continues.

And by all reports, the building industry is lapping up the blank canvas. Glowpear products have already been specified into wide a range of contexts and cavities, ranging from recycled apple crate timber to steel framing, and even precast concrete.

“Custom planting solutions are a notoriously expensive and troublesome part of high rise residential development, so the building industry has been quick to recognise the obvious benefits of using a versatile productised solution to help them achieve the planting results and green star ratings they desire”, Pollock explains.

GLOBAL AMBITIONS
Back home in the serenity of his inner-city courtyard Fenn smiles humbly when we ask him about the steep trajectory of Glowpear since its Australian launch in late 2014. After a ‘soft launch’ in Australia the company soon found itself catapulted into the US market.

“Things certainly escalated in the US a little faster than we had anticipated but we have since consolidated our position and have expanded into Singapore, Bahrain and Canada, with plans to tackle the UK and Europe during 2016″, says Fenn.

Fenn admits that he’s been genuinely overwhelmed by the support for Glowpear’s products, and puts the groundswell down to the community’s growing interest in health and wellbeing. “Farmers certainly don’t look like they used to!” Fenn laughs, “But that’s exactly what we’re excited about. We’re committed to making it possible for everyone to grow their own organic fresh produce, and bring their urban space to life”.

The above article was paid for and sponsored by GlowPear. The information contained in this article may contain ads or advertorial opinions.
Tell us what you think: Leave a comment
Printer Friendly Version
Read more about Garden Trends
<PreviousNext>
Did you find this helpful? Share it with your friends!
FacebookTweetPinEmail

Image by The Glowpear Mini Self Watering Planter